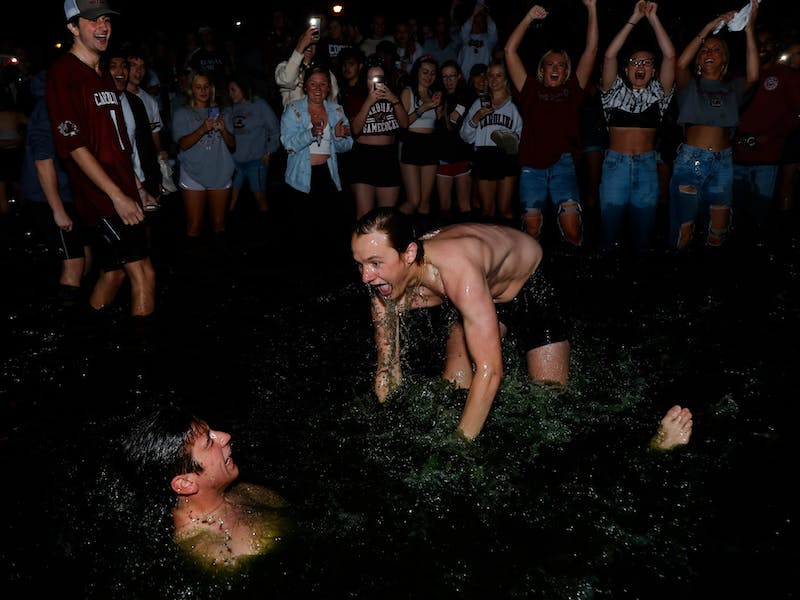 'I'll be able to take it with me forever': Students storm fountain after Gamecocks win national title

Gamecocks lined the sides of the fountain watching the final minutes of the game on their phones. When the final buzzer blew, hundreds of students yelled out and jumped into the fountain, mirroring the celebrations after head coach Dawn Staley led the team to its first national title in 2017.

Students who were not waiting in front of the library were soon on their way, rushing across campus towards the sounds of celebrating Gamecocks.

“Immediately, I was jumping up and down and immediately ran out the door to go to the fountain,” first-year sports management student Samuel Truett said.

The crowd — and the piles of shoes on the bricks around the sides of the fountain — continued to grow after the Gamecocks took the national title.

“We were one of the first people out here, and we didn't think it was gonna get much busier, but you can't even see the fountain anymore for the people,” Hagwood said.

Students came from all parts of campus to join in the celebration.

“Oh my gosh, I was in my dorm actually, like in my pajamas. And I screamed. I was like, 'Oh my God, we won.' I mean, I knew we're gonna win but just to see it actually happening,” first-year sociology student Amber Montgomery said.

Hagwood said the moment is especially meaningful to her as it comes at the end of her time at USC.

“Getting to see this experience as I'm about to graduate, I'll be able to take it with me forever,” she said.

For students who weren’t enrolled in 2017, this was their first time storming the fountain.

“It’s super exciting being a freshman student, and it being the first basketball season and the women bring home the national championship — it's definitely super exciting, a fun atmosphere and this is why I picked South Carolina as a school,” first-year chemistry student Natalie Deal said.

The fountain-stormers took pictures, carried each other on their shoulders, waved towels, shot fireworks, chanted and screamed. Colored lights shone into the fountains as students waded through the cold water and began to sing the alma mater.

Last year, the women’s team lost in the Final Four after missing a layup in the final seconds. Daquan Wise, a third-year electrical engineering student, saw this year’s win as a chance to make things right.

“I'm happy we finally got a chance to kind of not redeem, but really just prove ourselves and show everybody that we are who we thought we were,” Wise said.

For some students, the women’s championship title means more than just a new trophy.

“It means so much because seeing a Black woman and predominately Black basketball team take the championship again,” Montgomery said. “It's actually inspiring. I mean, I don't do sports. But I feel like I can do whatever — take my own national championship.”