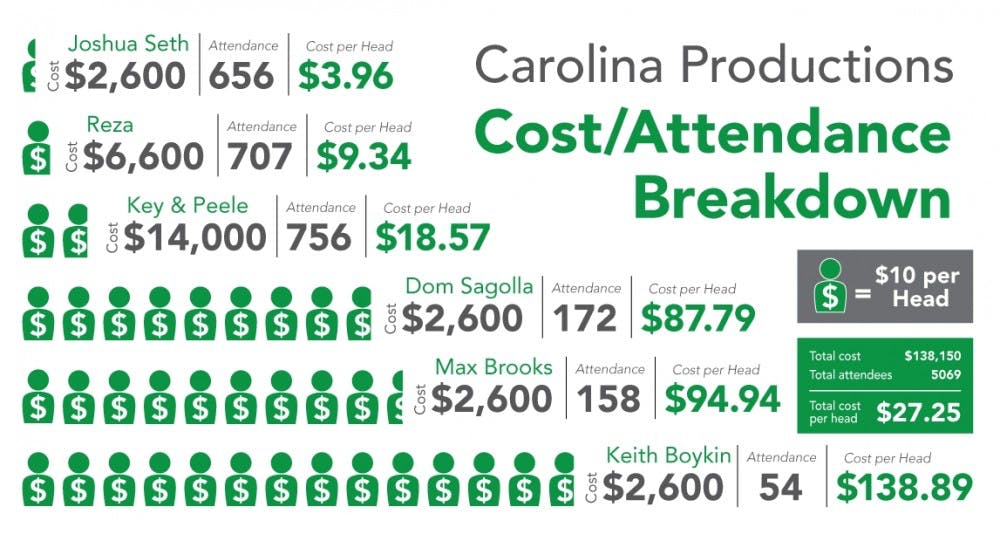 Some of Carolina Productions’ most heavily attended events last fall were relatively low-budget acts, while a handful of high-dollar speakers drew low attendance, according to cost and attendance data compiled by CP this week.

Keith Boykin’s Oct. 15 talk, “For Colored Boys Who Have Considered Suicide When the Rainbow is Still Not Enough,” came in as the most expensive cost-per-head act, at $138.89 per attendee. CP paid $7,500 for the presenter; 54 people came to the lecture.

CP has drawn criticism in the past for paying top dollar for low-yield events, like former South Carolina first lady Jenny Sanford, whose $15,000 talk in 2010 cost CP about $100 per person.

“(Attendance) kind of balanced itself out. (The) successes were able to balance out what may or may not be considered not so great,” Telford said. “I feel really good about the fall semester, the entire year of 2012, actually, it felt good. Of course we want to continue that and, of course, exceed our expectations.”

Sixteen live entertainment events at a total cost of $138,150 drew 5,069 students last semester. The cost-per-head average for all those events was $27.25.

At a price tag of $31,000, the Switchfoot concert featuring Paper Route was the semester’s most expensive event and also drew the most attendees, with 995, which Telford said was a fairly typical turnout for the genre. The cost per head for the concert was $31.16.

“I think it went really well,” Telford said. “Every time, we want to improve what we do, so of course bigger concerts is one thing we definitely want to look into doing.”

The concert budget for the spring is larger than it was in the fall, and Telford said he hopes that will mean larger attendance numbers as well.

Behind the concert, the next three highest attended events were also the least expensive per head.

“We didn’t really expect that to be as big as (it was),” Telford said. “We knew comedy was pretty big, but we were judging based off (Key and Peele’s) season one. And by the time they got here, season two had played, and they had just become so, so big.”

Telford said CP had to turn away more than 100 people for that event, which packed the Russell House Ballroom.

In addition to its live entertainment, CP spent $24,960 to bring 28 movies to Russell House Theater last semester. More than 9,000 students attended the movies. The per-head cost came to $2.75 — a bargain compared to typical movie ticket prices.

“Everyone loves to enjoy a free movie or something stress-free when they’re coming from exams or tests (or) homework,” Telford said.