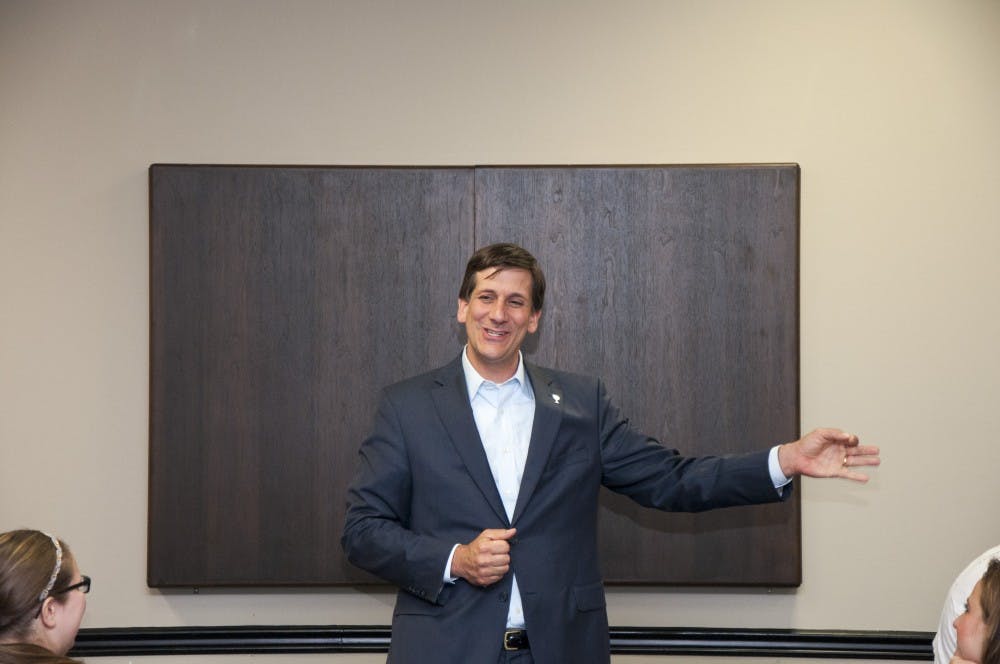 The very early gubernatorial campaign trail led Sheheen just down the road from his seat at the Statehouse to USC, where the College Democrats hosted him Tuesday night.

After losing a tight race for the Governor’s Mansion to Gov. Nikki Haley in 2010, the Kershaw County Democrat announced earlier this month he plans to make a second bid for the state’s highest office in 2014.

“I really love South Carolina, and I believe that our current leadership has failed us and that we can do things so much better,” Sheheen said. “I want to make changes in the state for the positive, and the only way I can do that is to try to lead and make a difference.”

In his mission to put the state “back on track,” Sheheen told Tuesday’s crowd he plans to focus on nonpartisan ideas, including improving early education programs, investing in roads and bridges, addressing high college tuition rates and growing entrepreneurship opportunities in the state.

Sheheen said solving those problems doesn’t have to mean finding more money within state government, but reallocating what the state already has.

“Does it make sense to give your flunkies in the governor’s office huge pay raises, or maybe give some of that to the highway patrol?” Sheheen asked.

Sheheen criticized the Haley administration’s handling of the state Department of Revenue’s computer hacking scandal late last year, saying leaders should have brought the situation to the public and taken responsibility immediately.

Students questioned Sheheen on other topics of recent high profile in the state, including gun control and the Confederate flag on Statehouse grounds. The Senate passed a bill just before Sheheen’s USC appearance Tuesday to allow people to carry concealed weapons in restaurants and bars, and Sheheen told the crowd that he thinks the state’s current gun laws are “acceptable and appropriate.”

As for the Confederate flag issue, Sheheen said he thinks “it’s a mistake to continue kind of shoving it out there.”

“I think we’ve got to move on,” Sheheen said. “I don’t have any disrespect for our history. I think our history’s important, but I don’t think it’s worth shoving in people’s faces. So I’m going on record saying we ought to move it.”

Sheheen lost the 2010 governor’s race to Haley by fewer than five points and said his campaign did a lot of things well that he will continue to do this time around.

But for the upcoming election cycle, Sheheen said he plans to make more time to travel the state and listen and talk to more people.

“Part of it is to engage young voters like they engage with the wider world now,” Sheheen said.

Haley has not yet announced a run for re-election, though recent media reports have speculated she is preparing to do so.