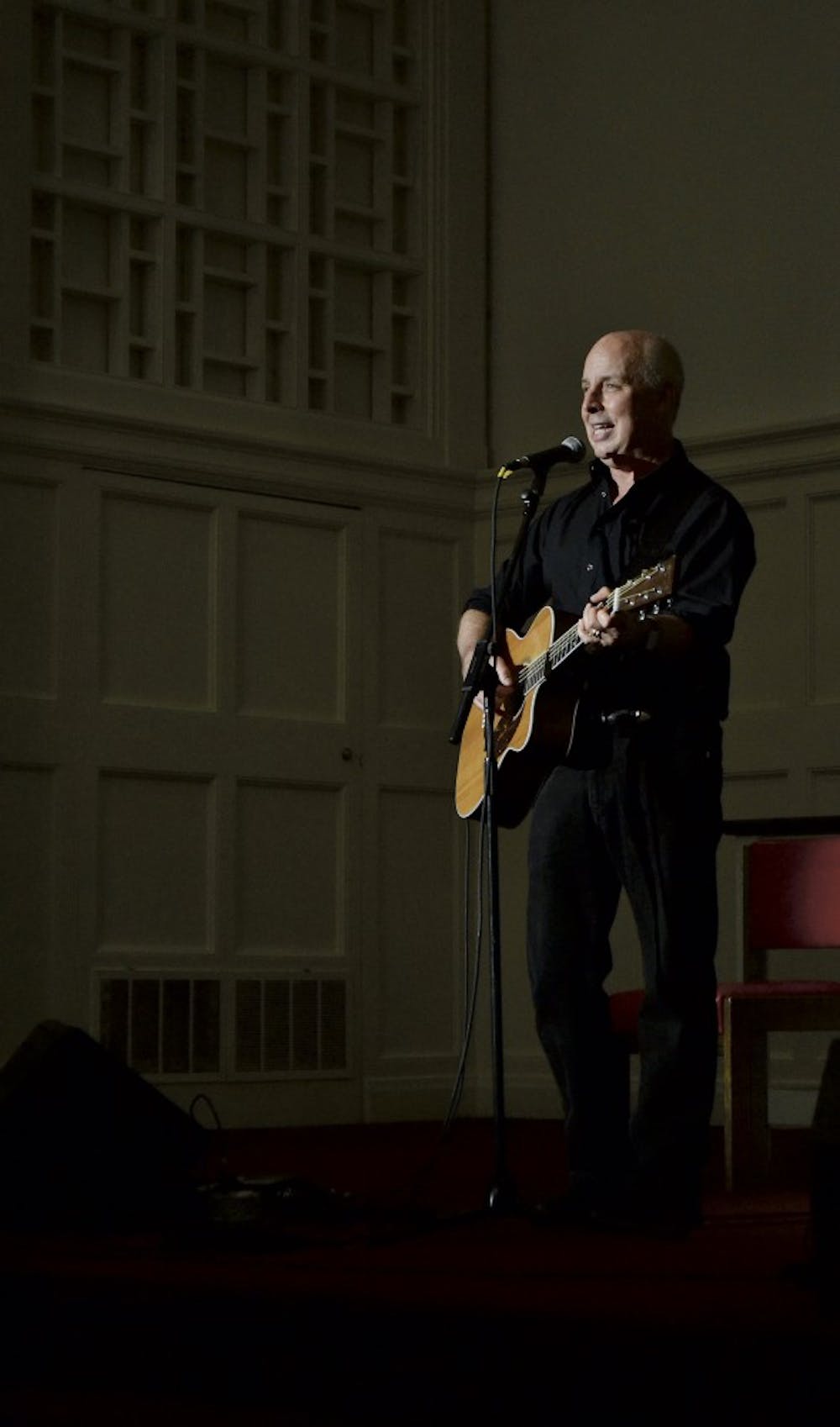 Bill Harley relates to audience of all ages

Bill Harley once ran half the Boston Marathon, unplanned, on a whim with a friend named Bob.

Bob told Harley one day, “Hey Bill, let’s drive up to Milton and watch the beginning of the Boston Marathon.” Bob’s proposition quickly turned into a challenge to run the first mile, then the first five, then 10, then 13.

By mile 14, Harley couldn’t go any farther. Bob pressed on and finished the marathon; Harley, meanwhile, was 14 miles away from his car.

Talking it over later with his wife, Harley said he just couldn’t figure Bob out.

She explained: “The week before, your mother had died. He didn’t know what to do. He said, ‘If I can get Bill to run the marathon, it’ll be OK.’”

Harley, a two-time Grammy-winning children’s entertainer and storyteller, told the story of Bob and the Boston Marathon in Rutledge Chapel Tuesday night. As he spoke, he played a soothing guitar tune, pausing his strum only to gesture with his hands.

And he sang a chorus of a song that, he said, always makes him think of Bob.

“He’s one of those who knows that life is just a leap of faith,” Harley sang. “Spread your arms, and hold your breath, and always trust your cape.”

Hosted by the School of Library and Information Science and the South Carolina Center for Children’s Literacy, Harley delivered a song and story-telling performance with humor that charmed an audience of all ages.

From jumping off the high dive as a 9-year-old trying to impress a pretty lifeguard — “Kristi, with a heart above the ‘i,’” Harley sang — to falling off the roof of his best friend’s house while throwing water balloons at the friend’s pet goat (“Who needed Disney World?” he asked), Harley’s singsong stories highlighted the mischief and innocence of youth.

“I spent most of my childhood not knowing what to do,” Harley said. “Most children do. So they just do something, kind of.”

Putting down the guitar, Harley related the tale of when he and his best friend were left behind at the Indiana Statehouse on a fifth-grade field trip. On the ride back to school in the vice principal’s car, he and his friend argued about who was always responsible for getting the other into trouble.

That was the day he realized “there’s a difference between who we think we are and who the people around us know we are,” Harley said.

“It’s a lesson I learned in fifth grade and keep on learning,” Harley said. “What I’ve learned about the universe is if you don’t learn a lesson, it’s just going to give you another chance to learn it.”

On that day, Harley said, “The scales fell from my eyes, and for the first time in my life, I understood the way that I was.