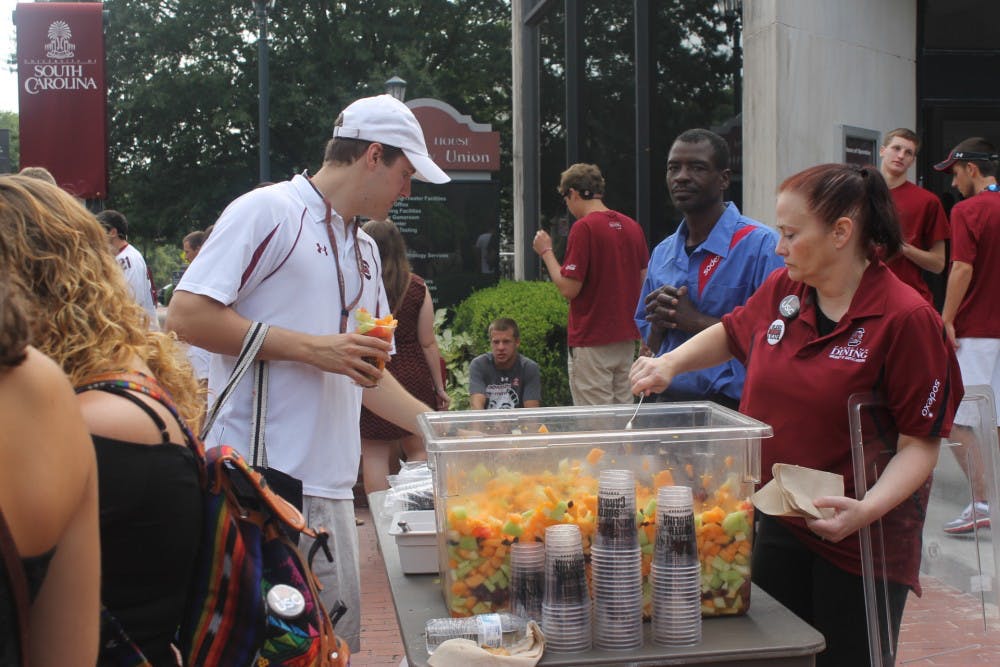 Carolina Convoy sells out for USC vs. Georgia trip

Student Government’s Carolina Convoy sold out for the second year in a row, as it carried its largest-ever student contingent to Athens, Ga., this weekend.

Two-hundred fifteen students purchased the $95 package that included a game ticket (worth $70), bus travel, food and a goodie bag.

“We were our own student section,” he said.

The value of the trip exceeded the cost to students, Thomas said. SG picked up the remainder of the tab because, he said, “As a student program, we want to help students come to Carolina Convoy.”

“We’d like to keep that price as low as possible, and even lower if possible,” Thomas said.

For the first time, students were able to purchase their convoy tickets online through Ticketmaster rather than wait in line in person. The convenience of online sales likely contributed to the higher attendance numbers, Thomas said.

Anne Shaw, a fourth-year biological sciences student from Roswell, Ga., purchased her convoy ticket the day she received the email about it over the summer.

A lifelong Bulldogs-hater with many friends who attend Georgia, Shaw said she’d had the Sept. 7 game on her radar since the Gamecocks’ schedule was released last year.

“The UGA game for me means a lot, and I know it means a lot for our football season because they’re our main rival besides Clemson,” Shaw said. “Plus, I’m a senior, so I thought I should go.”

Initially, she said, she was disappointed that the Carolina Convoy was the only way to purchase a student ticket to the game — with the exception of a general ticket purchase through the USC or UGA box offices — because she was hoping to spend time with friends in Athens.

“It was overall a good experience, and I’m really glad that I went, but I wish I had more time before the game to explore and do things,” Shaw said. “I think that was the overall consensus — we wished that we had gotten there earlier.”

The convoy arrived in Athens around two hours before kickoff and left approximately an hour after the Gamecocks’ 41-30 loss.

A mood of disappointment and exhaustion filled the convoy buses on the late-night drive back to Columbia, Shaw said.

“Everyone was just really sad,” she said. “People were talking about, ‘What if we lose to Vanderbilt next week?’ and ‘What does this mean for our season?’”

Last year’s convoy took 107 students to Gainesville, Fla. — a six-hour drive both ways over fall break — to see USC suffer a 44-11 loss to the Florida Gators.

Given the popularity of the football convoys, Thomas said he would like to expand the program to bring students to basketball and baseball away games in the near future.

“SG would like to take a leading role in assisting with student support for our other teams,” Thomas said.