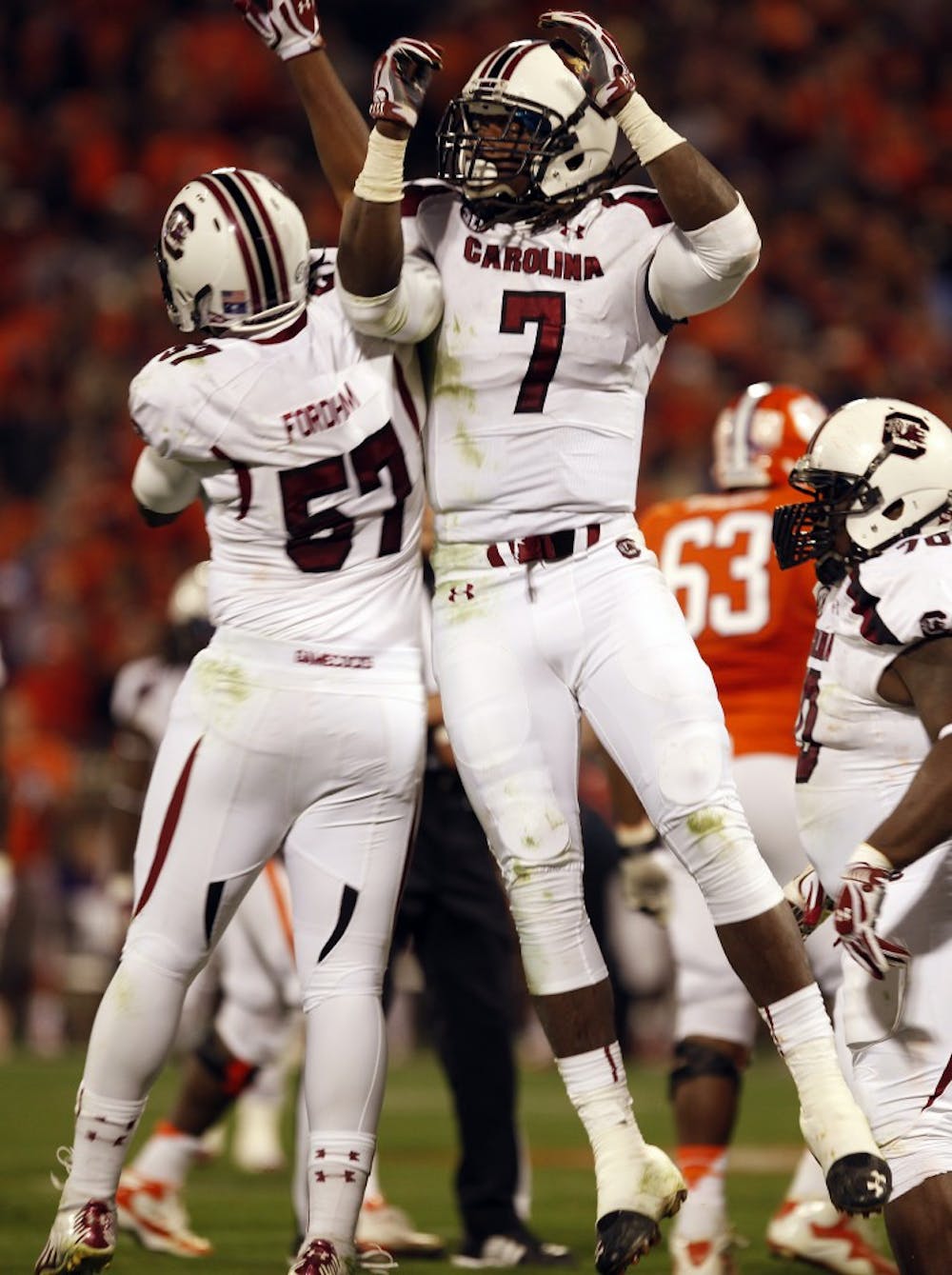 Snapshot of a rivalry: USC vs. Clemson

— Nov. 12, 1896 — USC 12-6. Under the direction of South Carolina College’s first football coach, W.H. “Dixie” Whaley, and in the first year of Clemson’s football program, South Carolina won the first game played between the in-state rivals. Around 2,000 fans paid 25 cents to watch the game at the state fairgrounds in Columbia on a Thursday morning. Historian Daniel Hollis described the game as “the gaudiest athletic spectacle in South Carolina.”

— Oct. 30, 1902 — USC 12-6. South Carolina beat Clemson for the first time since the beginning of the series, despite the Tigers, coached by the legendary John Heisman, being heavily favored in the game. Clemson students were outraged when, after the game, South Carolina students held a victory parade that featured a huge poster of a gamecock riding on the back of a tiger. Around 300 cadets from Clemson, then a military college, marched on the South Carolina campus with bayonets and swords to seize the banner and defend the honor of Clemson. About 30 South Carolina students — including future university president J. Rion McKissick — responded by arming themselves with sticks, clubs, knives and guns and taking cover behind a low brick wall. Police and faculty intervened to avoid violence, but as a direct result of the near-riot, a six-year hiatus in the rivalry followed.

— Oct. 28. 1920 — USC 3-0. South Carolina broke a seven-game winless streak in the series (the teams tied in 1915, and Clemson won the previous two games). Clemson was once again favored, as usual. A 25-yard dropkick field goal by South Carolina star fullback Tatum Gressette sealed the victory just two-and-a-half minutes into the game. In celebration of the Gamecocks’ first win against Clemson since 1912, students burned a paper tiger on the Statehouse steps.

— Oct. 22, 1925 — USC 33-0. One of the Gamecocks’ most decisive wins featured one of the most unusual plays in the rivalry. South Carolina quarterback Bill Rogers called for a punt. Immediately after a Clemson player touched the ball in a scramble for possession, Rogers scooped it up and ran it in 17 yards for a touchdown in the first half.

— Oct. 21, 1943 — USC 33-6. Cary Cox, formerly a member of the Clemson football team, was placed at USC as part of the wartime V-12 Navy College Training Program. He was ordered by naval instructors to play on the football team and was named captain. Cox reluctantly led South Carolina to victory against his former team. He returned to Clemson the next year and was captain of the 1947 team. He’s the only player to ever captain both schools’ football teams.

— Oct. 24, 1946 — USC 26-14. Two New York gangsters printed counterfeit tickets to the already sold-out game. Thousands of fans, angry that their tickets didn’t work, tore down the gates and overflowed the stadium onto the sidelines and the field, obstructing the view from the stands. South Carolina rallied for the win with two touchdowns in the fourth quarter. At halftime, a Clemson fan wrung the neck of a live chicken at midfield, prompting another near-riot.

— Oct. 23, 1952 — USC 6-0. The game was only played because a state law was signed to ensure the traditional competition continued. Clemson had been barred by the Southern Conference from playing any other Southern Conference opponent that year, including South Carolina, due to violating the conference’s bowl ban.

— Oct. 22, 1959 — Clemson 27-0. The Tigers won the rivalry’s last Big Thursday game after Clemson coach Frank Howard had pushed for the end to the state fairgrounds tradition because he was tired of making the trip to Columbia each year.

— Nov. 11, 1961 — USC 21-14. A group of South Carolina Sigma Nu fraternity brothers dressed as Clemson football players and took the field in Columbia during warm-ups, where they fell down, dropped passes and whiffed field goals on purpose. When it became obvious that the players were imposters, Clemson fans tried to storm the field, but security held them back. The fraternity brothers had also bought a sick cow with plans of unveiling it as the Clemson homecoming queen, but the cow died on the way to the game.

— 1980-1983 — Clemson enjoys a four-game win streak. The streak included a victory over a South Carolina team led by the Gamecocks’ only Heisman trophy winner, George Rogers, in 1980 — the same year the Gamecocks appeared in the Gator Bowl in a 37-9 loss to Pittsburgh.

— Nov. 20, 2004 — Clemson 29-7. South Carolina coach Lou Holtz’s final game is remembered less for the score than for the on-the-field violence that erupted late in the game. A series of fights cleared the sidelines for both teams, delaying the game for about 10 minutes with just fewer than six minutes left to play. Both schools opted out of attending bowl games that year as penance for the brawl.

— Nov. 30, 2013 — ? With a win Saturday, South Carolina will have five straight victories against Clemson for the first time in the rivalry’s history.