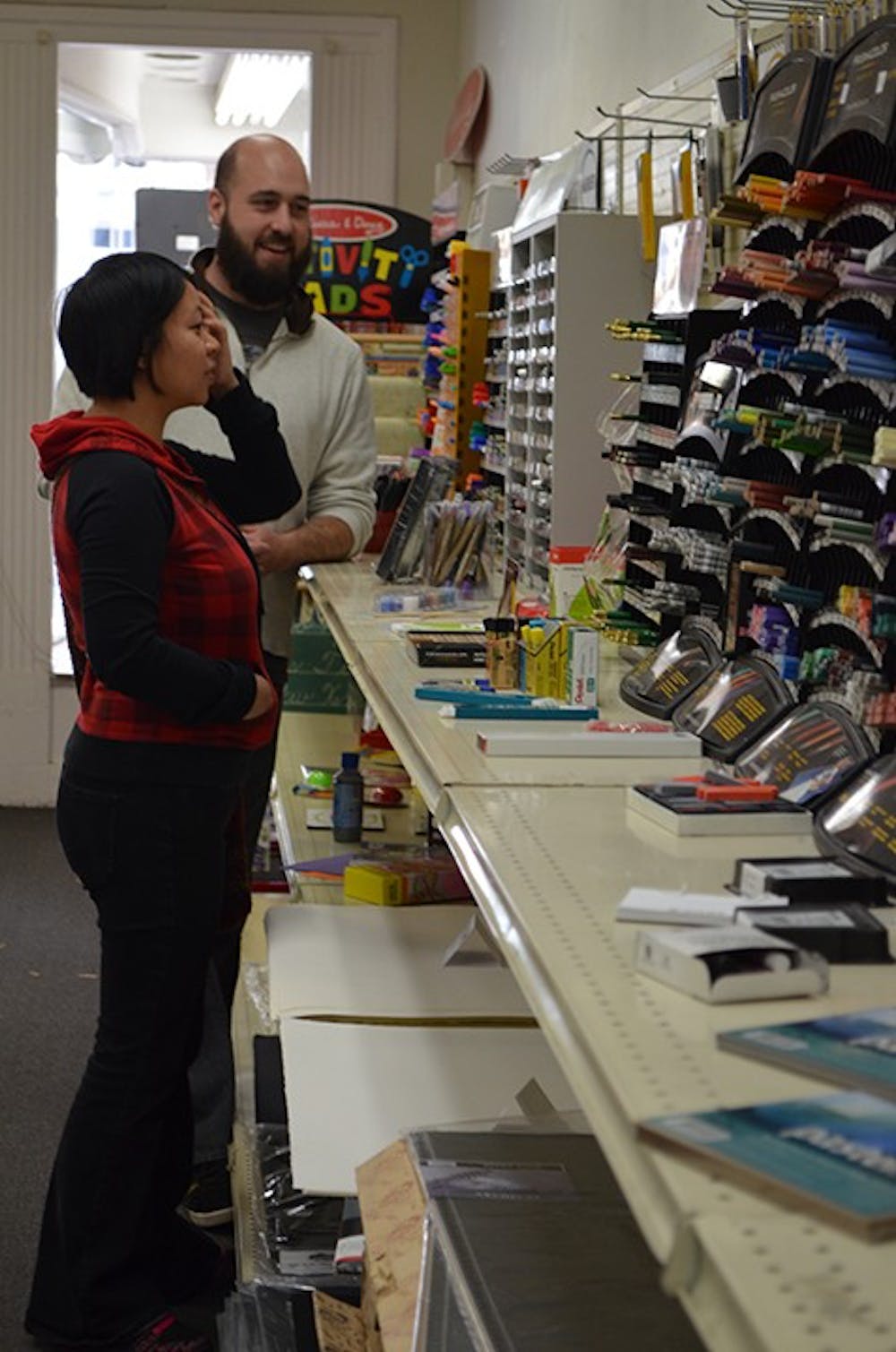 There’s not much day-to-day bustle at S&S Art Supply on Main Street.

S&S Art Supply’s last big hurrah will be at First Thursdays on Main this week.
Since moving to Main Street in July 2010, S&S has hosted local artists for showings at First Thursdays every month. This Thursday will feature eight local artists on display at the store.
The downtown festivities kick off Thursday at 6 p.m. on the 1400, 1500 and 1600 blocks of Main Street.
— Compiled by Sarah Ellis, Assistant News Editor

On a weekday last month, owner Eric Stockard helped a handful of customers who dropped in throughout the afternoon — a mother and son buying art supplies to make crafts for their home-school lessons, a retired art teacher looking for some frosted mylar sheets.

Rows of colorful art supplies line the walls below local artists’ paintings. But there are gaps on the shelves left by many of the store’s last remaining items that have been sold at deep discounts in preparation for the store’s closing this month.

Last summer’s back-to-school business was so good Stockard could afford to buy himself a funky old truck to fix up in his spare time and haul away loads of cardboard from the store.

S&S Art Supply’s last big hurrah will be at First Thursdays on Main this week.
Since moving to Main Street in July 2010, S&S has hosted local artists for showings at First Thursdays every month. This Thursday will feature eight local artists on display at the store.
The downtown festivities kick off Thursday at 6 p.m. on the 1400, 1500 and 1600 blocks of Main Street.
— Compiled by Sarah Ellis, Assistant News Editor

This summer’s back-to-school business was so bad Stockard is shutting down the business he started four years ago with his father, Brian.

“We had a blast. We had a good time,” Stockard said. “Time to go make some money.”

After a year of business on Rosewood Drive, S&S moved to the 1600 block of Main Street in July 2010.

Three and a half years later, slow sales and high costs have the Stockards clearing their shelves and making plans for a future that won’t include S&S.

“I think with some retail businesses … the only reason why they stay afloat is because they have a lot of family money and backing that we just don’t have,” said Ladymon-Stockard, an adjunct professor of studio art at USC. “We were breaking even four years in, but it wasn’t sustainable enough.”

Now, the local arts community prepares to mourn the loss of a Columbia creative staple. The closing of S&S leaves downtown with just one other independently owned arts supply store, City Art on nearby Lincoln Street.

“It’ll leave a hole,” said Lee Snelgrove, executive director of One Columbia for Arts and Humanities, which supports and promotes the arts in the city.

S&S has been “a hub” for the community’s creative needs, Snelgrove said.

Ken May, executive director of the South Carolina Arts Commission, considers S&S to have been “an important part of the kind of renaissance on Main Street.”

“We regret that they’re leaving,” he said. “Just knowing those people and being able to walk in and say, ‘Could you get me this?’ and they would order that — having that kind of customized service is attractive, and it comes with a price.”

The way Stockard sees it, S&S saved his life.

“I was really unhappy before I opened this store. It had its ups and downs in the first couple years, but the last couple years have been fabulous,” Stockard said. “And one of the reasons I’m kind of OK with letting it go, is because I’m in such a great place personally.”

A New Orleans native, Stockard left his home for Lafayette, La., after Hurricane Katrina. He made a brief return to The Big Easy, but seeing the city’s dire situation gave him an urge to get away again.

In 2007, Stockard joined his father in Columbia. His roots, though, were still deeply planted in his family’s New Orleans art supply store, where he had spent his childhood and started selling supplies more than two decades ago. So when the father-son duo decided to make a go at their own business in Columbia, they chose art supplies.

“One of my earliest memories was going to my family’s art supply store and picking out car models or little science kit,” Stockard said. “I remember the dusty floors, and they would smoke pipes and cigars … and Grandma making sure I knew that, ‘Hey, this is the family shop, and it’s always here for you.’”

He envisioned the same for S&S — a family-run store where his kids would make memories before he one day passed down the business to them. Stockard knows now he won’t be handing over the store to Lily and the new child he and his wife will welcome next summer.

”She has literally grown up here,” Ladymon-Stockard said.

Meanwhile, the city’s arts epicenter has grown up around her.

“I think if you have a community that commits itself to showing the value of a local or a handmade product, a lot of times that can override what an economy says or doesn’t say. And it’s not something that we do very well in America,” said Mark Plessinger, founder of First Thursdays on Main and owner of Frame of Mind, a specialty eyewear store on Main Street.

That’s what concerns him about the local arts and small business scenes in Columbia. And that’s why he’s troubled by S&S’s closing.

While Stockard can let go of S&S with the peace of the impact its made on his life and in the community, Plessinger said it’s “gut-wrenching” to see a fellow small-businessman fall to the power of consumers’ “big-box” mentality.

Stockard couldn’t compete with the lure of big-box deals and online convenience.

But what customers won’t likely find outside of local suppliers like S&S is the personal connection and in-depth knowledge base that Stockard has brought to his business.

“I’ve always said I’m good at making people better at what they do, so that’s kind of what I’ve done with art supplies. I know how to use the stuff. I’m not all that great at doing it myself, but I’m good at helping other people realize their potential,” he said. “I just like helping people.”

With the closing of S&S, Stockard will transition to helping run his dad’s cigar stores on Main Street and Rosewood Drive while Ladymon-Stockard begins looking for full-time, tenure-track teaching positions at universities. Stockard will stay intimately involved with the arts community as a board member for the First Thursdays on Main.

‘An impact in everybody’s lives’

While S&S revitalized Stockard’s life, the shop also played an integral role in bringing life to the emerging downtown arts and business scenes when it arrived on Main Street.

Stockard and S&S began making an immediate impact on the downtown arts community when, in its first month of business on Main Street, S&S hosted a local artist’s show at the store for First Thursdays, the monthly arts party started by Plessinger in 2009.

What began as a monthly art show at Frame of Mind snowballed into a three-block neighborhood celebration of visual arts, music, dance, food, drink and community.

Plessinger estimates the event now draws an average of 1,200 to 1,500 people each month. And S&S, he said, has been a “partner in crime” to help grow First Thursdays to what it is now.
May recognizes First Thursdays as evidence of the way the city is increasingly finding its identity in the arts.

“You can now see billboards on I-77 touting the arts in Columbia, and it’s worthy of touting,” he said. “I think it’s becoming more and more a part of the city’s profile and calling card, and I think it’s really beneficial. A lot of the city leadership really talks about it now and buys into it.”

For any city, Plessinger said, supporting local art is important for the sake of keeping valuable talent at home. For Columbia in particular, he said, the need now is for the city to actually take notice of the deep talent pool that’s available, lest it trickle out to other cities.

“It’s unreal how deep the scene is here. And I think it’s something that’s been taken for granted,” Plessinger said. “One of my favorite words is impact, and art makes an impact in everybody’s lives. And you don’t want that impact to go away.”