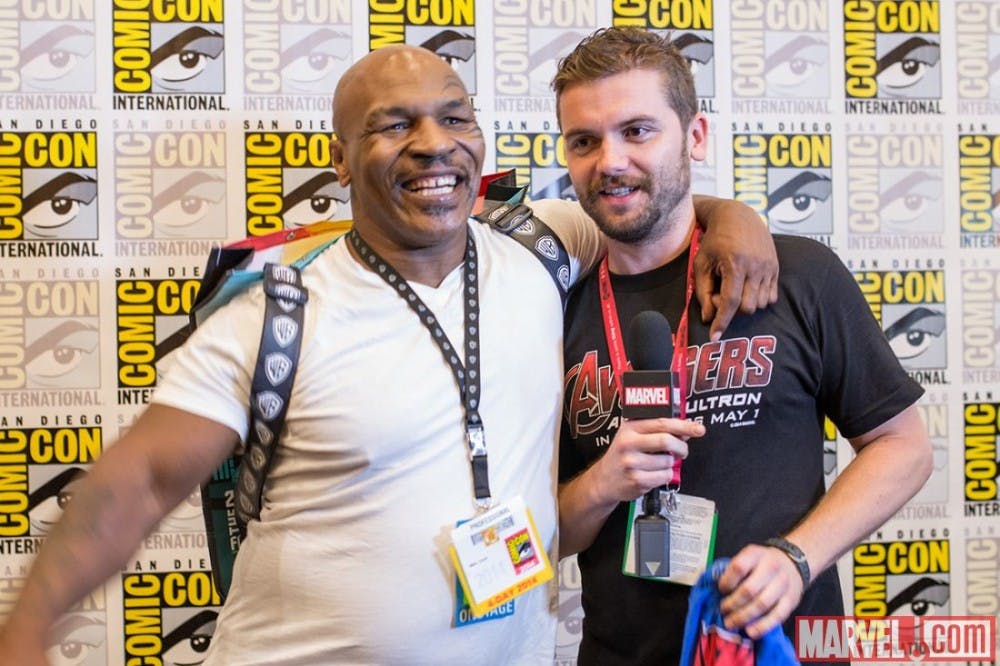 When Blake Garris attended USC as an undergraduate political science student, he never expected he would be producing video content and written articles for Marvel Comics as their Entertainment Manager for Video and Content.

Following his graduation, he was all ready to intern with big name politicians in South Carolina his dad had connections with. But this path just didn’t feel right to him, and he found himself interning at ETV, an educational television company, instead.

He began freelancing with online magazines, and someone at Marvel contacted him about an interview. He did freelance work for Marvel for about seven years, and he has worked there full time for two and a half years.

“I wasn’t as into the comics as I was as a kid, but it was still Marvel has that really cool logo and I flipped at the chance,” Garris said. “They had a full-time opening a couple of years ago, and it fit with what I did so they brought me on.”

Garris spent his weekend from July 24 to July 27 working on Comic-Con International in San Diego, California. He provided live streaming of the entire event, from 9:30 a.m. to 7 p.m.

During the convention, he was interviewing celebrities, showing tours of booths and streaming panels and signings. Some of them any celebrities he was able to talk to included Chris Hemsworth, Robert Downey, Jr., Michael Douglas, Paul Rudd, Buzz Aldrin, Mike Tyson and Stephen Moyer.

“You never have any down time, and you’re working the whole time,” Garris said. “It takes a couple of days to process. It’s definitely fun. It’s exhausting. But it’s weird, you’re really sweaty and tired, but you get kind of a rush when you’re interviewing some of those stars.”

Talking to a sea of celebrities sounds fun, but it also requires a lot of work. Garris’ coworkers make the job manageable, and the opportunity to meet so many people is his favorite part about working at Marvel.

“It’s a lot of hours and a lot of time, and it could be tough if you didn’t like the people that you worked with,” Garris said. “But it’s cool to be a part of that world now that the films are doing so well.”

Another perk of the job is being able to hear the Marvel news before anyone else. But that also means he has to keep what he knows a secret.

“It’s hard not to leak some of the news I have that I can’t tell. I have a lot of friends who are always seeing the films or some that are into comics, and I know some things that I’m not allowed to tell and it’s really tough because they always ask me and I can’t really say anything.”

Although he didn’t go in the political science direction he originally through he would take when he graduated in 2006, Garris still learned a lot during his time at USC.

“From the political science aspect, there were some really great professors who were just fantastic,” Garris said. “They would tell stories from working in politics and it kind of helped me learn how they interact with different types of people.”

Garris even returned to USC later, and graduated with a master’s degree in media arts in 2011, which had an even bigger effect on where he is today.

“USC in the master’s program was really great because they gave me control. They just let me create stuff with their equipment, and that’s always the hardest thing to do,” Garris said. “The hardest thing for me and a lot of people who want to create videos is getting equipment and getting money to rent out equipment, but at USC they were so cool about ‘here’s a camera, do your thing.’ That was really great, to just let me have full reign over the creative process.”

For students who might want a career in media arts, Garris says not to turn down an unexpected or strange opportunity.

“No one wants to wake up at 7 a.m. to go film Toddlers and Tiaras, but every little show I worked on that was a national program helped me learn something new each time and they were all different experiences that I had to deal with different people,” Garris said. “Now looking back on it, when strange things arise when we’re filming something I think of the advice I learned from all these other companies and use it to help pick the filming up.”