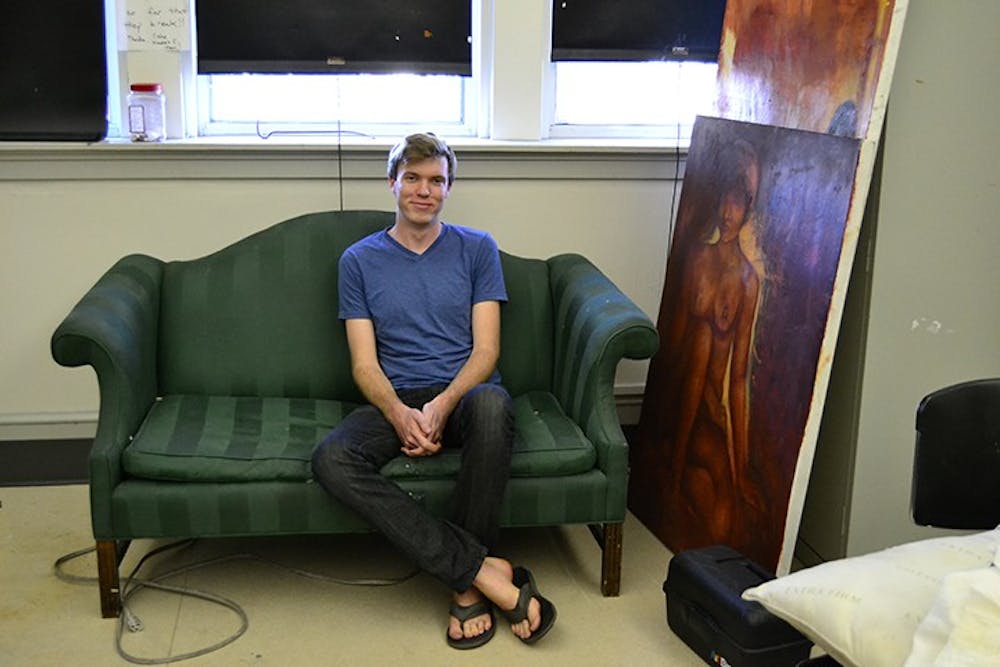 Tucker Prescott has drawn and painted since before he can remember. As a child, the fourth-year painting student spent a lot of time inside, sketching meaningless images with pencil and paper to occupy time. He realized the process of drawing was interesting to him.

“It feels good, like this is what I should be doing,” Prescott said. “There’s not necessarily a specific process of what I’m doing, whether it’s drawing with charcoal or paint. It’s about putting down a mark and making it lead into a full image.”

Drawing figures and landscapes interests Prescott. One piece in particular has occupied his time since early September.

“The composition was developed first and the ideas of story came afterwards.” He said. “It’s still got a ways to go, but I want to have enough completed in time for the honors thesis showcase in November.”

The assignment was to draw one of the nude models and create an original composition with the images. The students’ creative freedom gave them the opportunity to decide how they wanted their story to be portrayed.

The idea behind Prescott's recent painting was whether to run or to face the forces of a problem or challenge. He wanted the subject of his painting to represent the multiple stages of inner conflict that a person goes through when facing a problem.

“When I sit down to draw or paint, I think that I am going to paint something,” he said. “I am very representational, so I have to have something in mind. I’m not abstract when I think.”

As an artist, he has seen his abilities grow over time. After traveling alone to various places in Europe to hitchhike to Italy for a painting program, he saw a lot of creations that left him captivated.

“What impressed me and brought me to awe — and almost tears — was just the huge size of so many different paintings,” he said.

He described the paintings as incredible and beautiful, standing at 15 by 20 feet and larger. He hopes to incorporate size into some of his future works.

“Size is not necessarily something you can see on the Internet, but it’s a huge element in how people perceive the work,” he said.

Prescott spends four to 15 hours a week painting and still feels like it’s not enough practice. But with the help of professors and courses designed to improve his abilities, he's learned a lot.

“David Voros and Pam Bowers have been great professors who have taught me so much about materials, the oil process, and age-old traditions of European painting,” Prescott said.

Prescott is also interested in filmmaking and says he has used a lot of his artistic skills in this as well. He has an internship at Mad Monkey, a production company here in Columbia and works mostly on video editing.

It may seem intimidating that this senior has an extensive portfolio and is already doing so much, but Prescott still feels like he has room to grow.

“Time is important,” he said. “Do a lot. I always feel like I should be doing more. If you do more, you’ll get better at anything.”