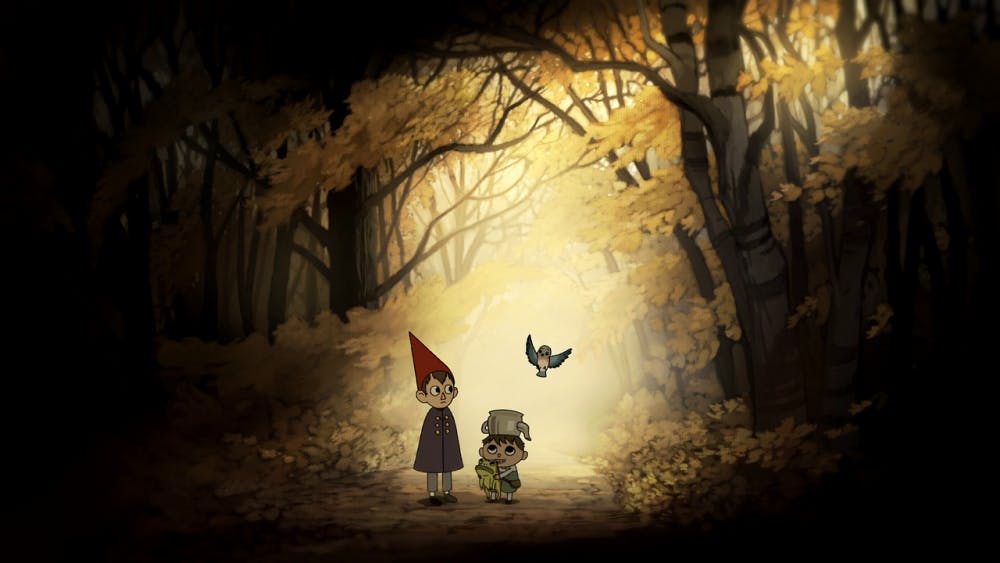 “A punchline for Pat is the calm smile of a man made of watermelons being revealed through parting morning mist.”

“Over the Garden Wall” tells the story of two brothers, Wirt (Elijah Wood) and Greg (child actor Collin Dean), as they venture into the Unknown, a forest realm with the rustic darkness of early American folk tales. Over the course of their journey they’re joined by Beatrice, a testy bluebird with a mysterious past, and are dogged by the Beast, a creature who preys on lost souls.

It’s a storybook tale buoyed by surrealism, like a darker “Wizard of Oz,” but the show transcends genre trappings at every turn. The series doesn’t just use storybook tropes, it transcends them, mixing surrealism with folksy charm. The unique mix of haunting and affable works thanks to the honesty with which McHale crafts his world — he views antagonists and heroes alike with openness and respect. A witch isn’t necessarily wicked, and a frog’s problems are as real as a human’s.

Thanks to this approach, protagonists Wirt and Greg are fully fleshed-out characters. Their archetypes — neurotic and plucky respectively — could easily render them two-dimensional, but it’s to the series’ credit that they feel so real. Character details are carefully doled out as the series progresses, and by the end of the series, Wirt is so relatable and Greg is so lovable that it’s almost painful to say goodbye to them. That’s the consequence of the miniseries format — its densely packed quality makes its abbreviated length harder to bear.

The gorgeous animation goes a long way in establishing the series’ strong folk-gothic tone. “Over the Garden Wall” is a series animated by animation lovers, and it shows, drawing from sources as diverse as Hayao Miyazaki and Betty Boop animator Max Fleischer.

The animated miniseries is a new format, and judging by “Over the Garden Wall,” television could stand to see more of it. Every episode’s animation shows off a gorgeous level of detail and craftsmanship, packed with elaborately constructed sequences and striking character designs.

The storytelling, too, is focused and sharpened by the miniseries format. The front end of the series takes its time, devoting each episode to a different playful vignette, but, by the back half, the story’s urgency rises to a satisfying, definitive ending. The 10-episode length grants the series a perfect balance of playfulness and focus.

The tale is lent a stylish, old-timey quality by the stellar soundtrack. McHale enlisted gypsy-folk band Petrojvic Blasting Company to help him compose the songs, and the results harken back to early American folk songs and opera.

The songs range from delightful to harrowing, and so does the show. It mixes tones so deftly and subtly that it defies categorization. To call it “comedy-fantasy” ignores how dark and real it can be.

It’s a show unafraid to combine a lackadaisical trip on a frog-filled steamboat with a harrowing encounter with a witch; it’s a show that’ll devote an episode to a golden age animation homage in the midst of the story’s dark climax.