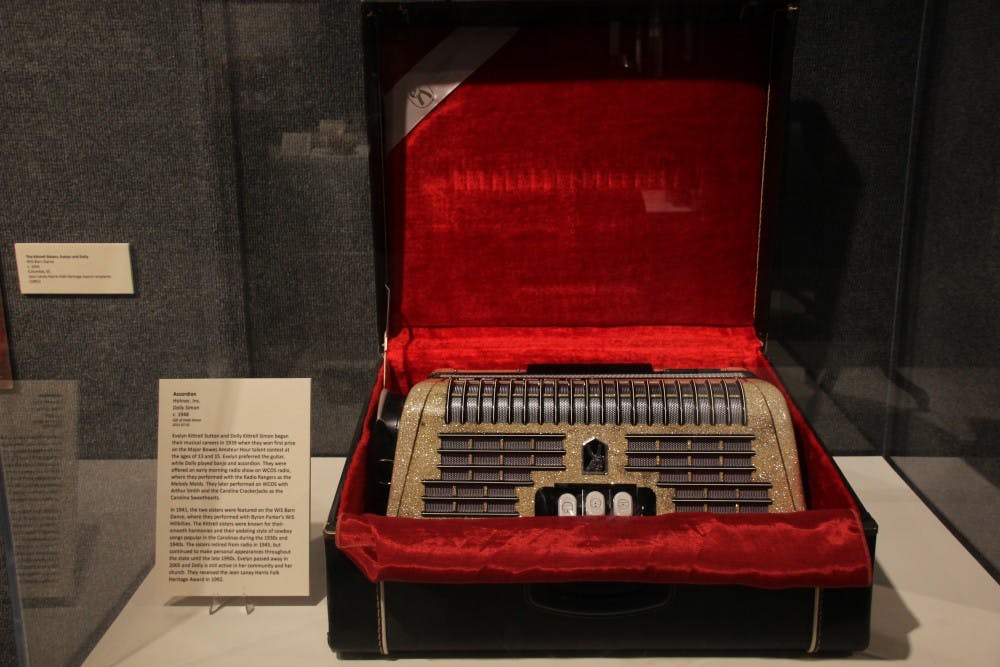 The McKissick Museum has collected an impressive range of instruments and artifacts for its "Heard at Every Turn: Traditional Music in South Carolina" exhibit, but the job doesn't stop there.

“It’s not about the items; it’s about the story that goes with it,” Saddler Taylor, chief curator of folklife at McKissick Museum, said.

The exhibit, located in the south gallery of the Museum, profiles the diverse music history of South Carolina. The state's traditional music history can't be defined by just one specific genre or instrumental group, so the exhibit includes genres such as folk, country, bluegrass, gospel and classical music. One of the main goals of the exhibit is to show how important of a role the many different ethnic groups in South Carolina have played in creating a diverse musical climate.

The exhibit reaches back to traditional Native American music, featuring the Tarahumara tribe's goat hide instruments. The exhibit also displays African horns, drums and basket rattles that date back to the 19th century. Exhibition pieces also come from all over South Carolina from places such as Lexington, Pickens, Spartanburg and Columbia.

Instruments and information boards tell the story of South Carolinians who made or played instruments that would eventually join South Carolina's musical history. A handmade gas can guitar, a popular harmonica, a banjo and performance attire provide visual attractions for the exhibit while three TV screens play documentaries of popular musicians.

The exhibit even features a listening station where museum attendees can sit down and listen to the sounds of South Carolina such as the Edisto River Singers or jazz and blues.

However, upon entering the museum one can see the exhibit's flashiest display: a sparkly, red-sequined suit that belonged to South Carolina’s very own James Brown, which is on loan from the South Carolina State Museum.

Although Taylor said McKissick Museum often borrows display pieces, such as the two suits, from other institutions, a lot of the pieces come from a combination of items in the permanent collection here at McKissick and private contributions. This particular exhibit is heavily weighted with material from the private community.

“We do quite a bit of leg work on identifying who has objects that would help tell a story,” Taylor said. “The [South Carolina] museum community is small and people know each other, so if we know what we are looking for we can fill gaps in the timeline.”

Many of the pieces in “Heard at Every Turn” come from local contributions, some of them from Taylor’s friends, colleagues or people who have passed away.

“There’s a string instrument up there called a tro,” Taylor said. “It’s a Cambodian string instrument similar to a violin in concept. A Cambodian man that lives up in Wellford, South Carolina, came here about 20 years ago and got out of Cambodia running through minefields to get out of the country. Soon after he ended up here he had a friend of his mail that tro to him. Those are pretty special, just knowing the people that are behind those objects.”

Because most of us didn’t get the opportunity to know all these artists, Taylor hopes the exhibit will serve to tell us their stories.

“A lot of people don’t understand or don’t realize how deep and how rich the musical traditions are in South Carolina,” Taylor said. “I hope somebody can walk in there and learn something about what they didn’t realize what they had right there in their backyard."