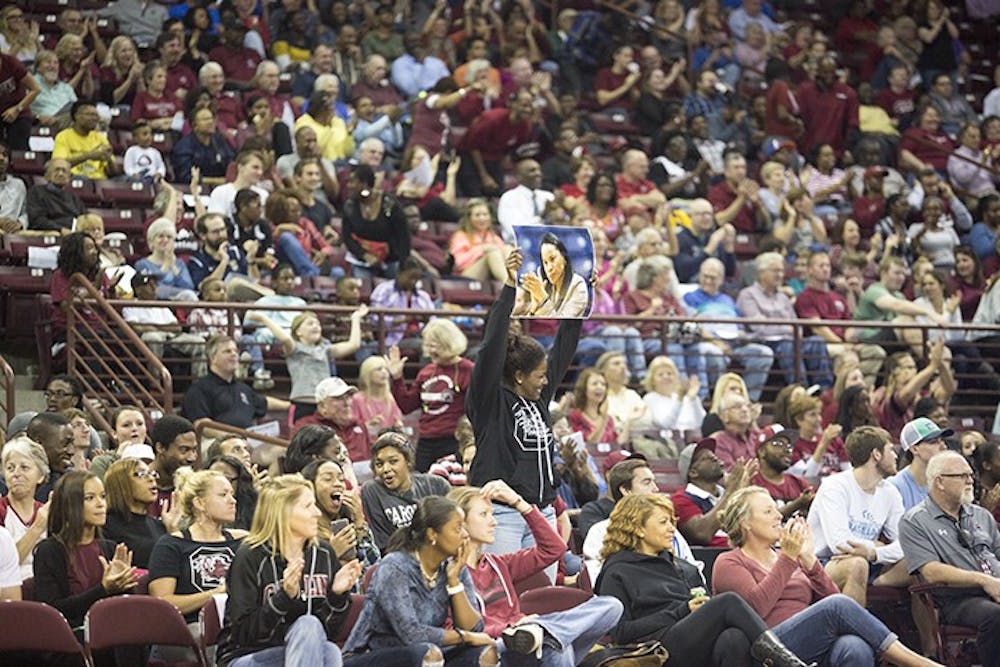 Column: Students won't enjoy the relocation of 'The Roost'

When I think of the typical college basketball game, I think of passionate students along the court cheering as loud as they can to create some of the most electric atmospheres in all of sports. That’s what I love the most about college basketball: the large number of students cheering literally feet away from the action as they pile up in the courtside section. This type of atmosphere may have just gotten a little harder to create in the Colonial Life Arena for women’s basketball games.

Two weeks ago, it was announced that the sections for students at basketball games would be the same as last year for the men’s games. The sections for students at the women’s basketball games, though, will only be in sections 110 to 112 and 217 to 219. Section 113, the former courtside home of “The Roost," will no longer be available to students. This year, it seems like “The Roost” will be forced to locate to sections 110 to 112 and 217 to 219 for the women’s basketball season, which are the sections behind one basket alongside the band and cheerleaders.

According to the ticketing office, this move was made for several reasons. One reason for the move was the challenges that came with the lower bowl of the arena being part student section and reserve seating. The ticketing office issued the follow statement regarding the change:

“Because of the growth of the program’s fan base leading to so much of the lower bowl being reserved seating, it is operationally challenging to have some sections, such as 113, be part reserved and part general admission. It can lead to confusion and frustration for our fans, so in an effort to minimize that, we eliminated as many dual-purpose sections as possible.”

“Our ticketing policies are constantly evolving in response to the growth of our fan base with the goal of creating the best possible environment for our team and fans. We have made changes over the last few seasons, using historical data and projections for demand in the season ahead. Historically, students have not claimed all of the seats in the rows of Section 113 reserved for them, leaving them in a critical part of the court.”

“I hate that they moved the section on us, (and) I think it’s unfair for the students to (no) longer be able to sit courtside,” third-year sport and entertainment management student Chris Young said. “Most students pay $7,000 a semester, we should be able to sit courtside at our own stadium, especially to support [one of the] best basketball programs in the nation.”

Young was not the only one who believes that the students should still keep the courtside seats.

“I think that it doesn’t make sense to move a student section that’s been in the same spot forever just because there’s more viewers once the team gets better,” third-year visual communications student Alyvia Wright said. “I think students are less likely to want to come if they have to watch behind the [basket] … Nobody wants to watch a basketball game behind a basketball goal, everybody wants to watch it from [courtside].”

Third-year sport and entertainment management student Harrison McConnell also expressed his concern that the atmosphere will be changed at games.

“I’ve always enjoyed college sports because of the atmosphere that students bring from courtside to the games,” McConnell said. “It saddens me that we no longer have that for the women’s games.”

It’s clear that the student section is upset and disappointed with this move, and who can blame them? The courtside section has been home to the student section for years, and now they have to move to another section because it’s no longer available to them. When you are forced to stop a tradition that has been in place for years, there is sure to be considerable backlash.

The students will still come out to support the Gamecocks — especially with huge games being played at home this season — but they will not like how they were forced to leave their courtside seats and be stuck in the corner of the arena.

“I think that those of us, like me, who have come to every single game since freshman year just aren’t going to enjoy it as much anymore," Wright said.

Sadly, the ticketing office reserves the right to make any seating changes. Students are upset because they'll have to move "The Roost" from its traditional position. I don't think this will necessarily hurt attendance, but the change could hurt the the atmosphere at Colonial Life. That could make a huge difference for a team that needs the fan support down the stretch.