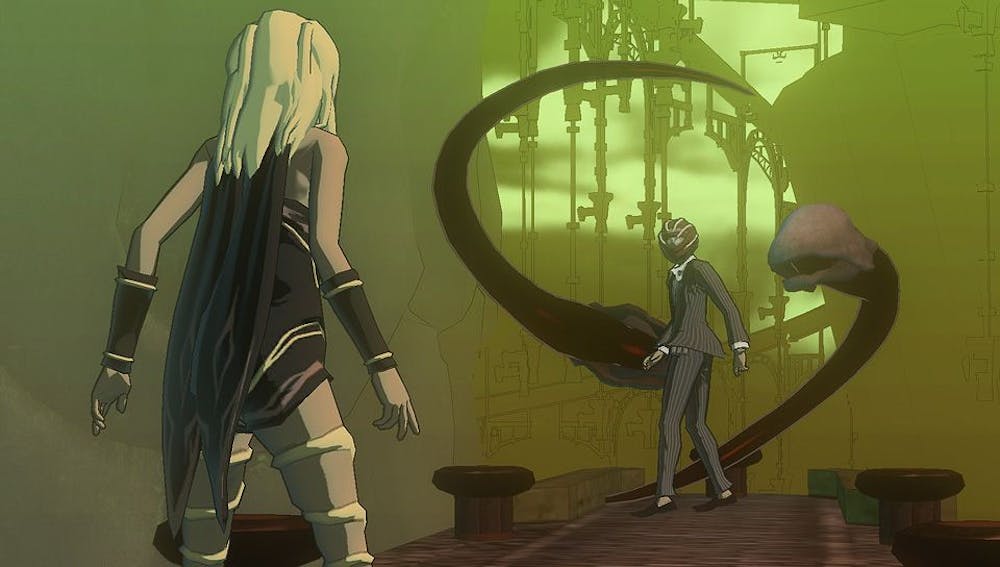 "Gravity Rush" was first released in 2012 on the PlayStation Vita, garnering high praise from critics. Now on the PS4 with improved graphics and the benefit of a full TV display instead of a small handheld screen, "Gravity Rush" shows how well it has aged.

"Gravity Rush" tells the story of a girl named Kat who falls from the sky into an unfamiliar city and awakes with no memory and, to her surprise, the ability to control gravity. Kat, joined by her cat, Dusty, must learn to control her powers in order to save her new home from evil gelatinous creatures called the Nevi.

Kat’s story is essentially a superhero origin story where the player watches her evolve into the savior of the city, but, in batman-esque fashion, this evolution doesn’t come without conflict from the citizens. Despite a few irritating anime cliches — complete with a pointless shower scene — "Gravity Rush’s" storytelling is certainly one of the most interesting parts of the game. Kat’s interactions and thoughts are undeniably cute and lighthearted, yet the game still maintains a sense of mystery that carries across its 10-hour main story.

While the story keeps the player’s interest, the gameplay is what truly stands out in "Gravity Rush Remastered." When developer Japan Studio first announced back in September 2015 that they were porting "Gravity Rush" to the PS4, the question arose of whether the Vita controls could be successfully remapped to the PS4. With "Gravity Rush Remastered," Bluepoint Games, the company responsible for porting the game to PS4, effectively put these worries to rest.

Using Kat’s powers to "fall" around the city feels great on the PS4. The basic mechanic the game is built around asks the player to press R1 to make Kat hover off the ground, use the right stick to choose a direction and then press R1 again to shift gravity and fly across the city. Due to the unique nature of this mechanic, it can take some getting used to, but after getting the hang of the controls, flying around in the beautiful watercolor environments and exploring every corner of the world becomes addictive fun. Like the Vita version, “Remastered” uses some touch and motion controls, but the great benefit of the Dualschock 4 controller in this game is that the player has the option to turn these off and use the analog stick and triggers. This results in gameplay that generally feels smoother and more controllable than its Vita counterpart.

Oftentimes when a remastered version of a game is released, it’s difficult to see any obvious visual improvements unless you’re looking closely. This isn’t the case for “Gravity Rush Remastered” as the enhanced textures and improved lighting make the cel-shaded visuals of the game appear much brighter and clearer when compared to the original release. The game runs at 60 frames per second and a native 1080p resolution, making Kat’s movement and combat smooth.

Just like in the original game, the action in “Gravity Rush Remastered” is broken up by periodical comic book style pages where most of the game’s story and dialogue are shown. This style works well and the detailed and colorful drawings feel like they could be coming directly from a comic book. "Gravity Rush Remastered" improves upon the original game's already stylish aesthetic, making the art style one of the game’s best qualities.

Unfortunately, "Gravity Rush Remastered" does have flaws and most of them come from the areas that the remaster left untouched. Bluepoint Games left the mission structure as it originally was, choosing only to add in the original game’s three downloadable content packs. This means the same criticism about mission structure that the game received in 2012 still applies in 2016.

"Gravity Rush’s" early missions are a lot of fun as the player is pinned up against mostly small creatures with large weak points that Kat can lay waste to with an easy gravity kick. However, toward the end of the game, when Kat is facing creatures two, three or four times her size with small weak points, the combat gets a little clunky. In some of the later levels, the game becomes a process of maneuvering around to get the right angle on a foe and then hoping to get lucky enough to hit them before they shift positions slightly, causing Kat to fly past them.

Additionally, the missions begin to take on the same basic structure: Fly to an area, kill the nevi, fly back to who sent you. Rinse. Repeat. The downloadable content missions are also guilty of this as the missions largely consist of fetch quests and hordes of enemies. With a mechanic as interesting as gravity manipulation, it’s disappointing that Japan Studio didn’t incorporate more puzzle or varied combat elements into their game instead of simply making the enemies larger and larger.

While the issue of formulaic mission structure is a legitimate flaw, it isn’t enough to make "Gravity Rush" a bad game. Kat’s story is full of charm, mystery, relatability and everything in between, and, as long as the player can look past a few minor flaws, "Gravity Rush" is a fun, original game that PS4 owners should try out.