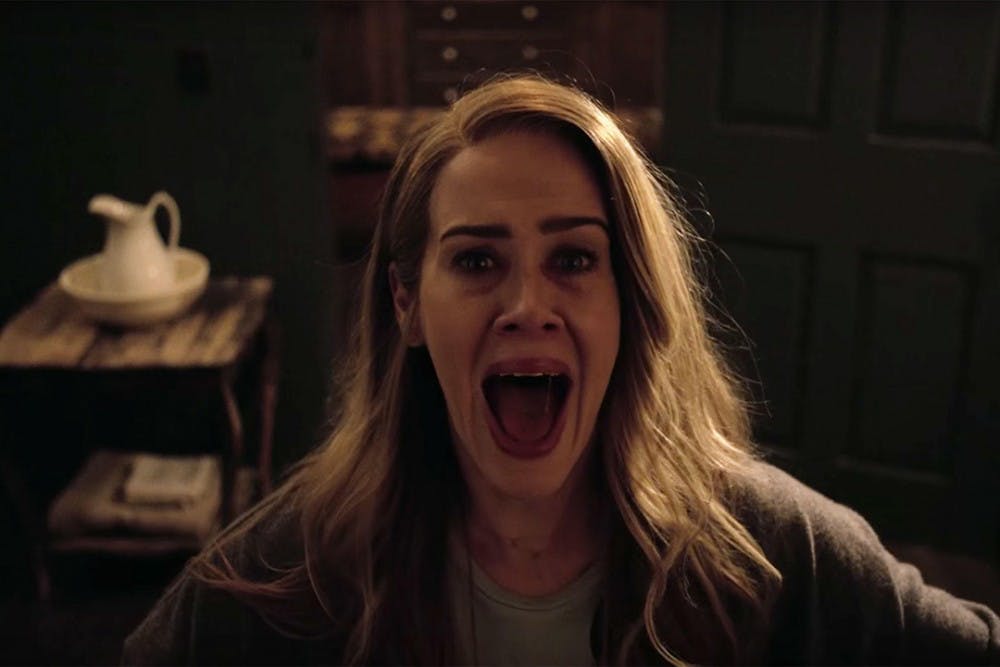 "American Horror Story" is a drama- and horror-filled television series created by Brad Falchuk and Ryan Murphy. Five seasons have aired since 2011, and the sixth season is currently on air. Each season focuses on different characters and locations; however, most of the actors come back each season to play a different character.

The sixth season is titled “Roanoke” and acts as a show-within-a-show. "Roanoke" is set up in a documentary-style format following Shelby and Matt Miller, a couple who moved from Los Angeles to a farmhouse in Roanoke, North Carolina, for a quiet escape from reality. However, not long after moving in, the Millers' quiet escape becomes more of a living nightmare.

Based off of what I’ve seen from other seasons of "American Horror Story," this season is the most “realistic.” The show is split between actor portrayals of Matt and Shelby’s story and Matt and Shelby talking to a cameraman describing their experience. Although the ghosts in Roanoke are portrayed by real characters, the documentary-style formatting makes the story seem like something that could have happened.

The main horror aspect of "Roanoke" comes from the ghosts terrorizing the Millers. The show plays many flashbacks of what happened on the land and in the farmhouse that made it so evil. I think "Roanoke" does a good job of creating eerie and sometimes gory horror while keeping the show an interesting drama. The horror is not overdone and rather adds to the plot, creating a story among the gruesome details.

The storyline also keeps viewers interested and coming back each week for more. Five episodes have aired since Sept. 14, each following the Millers and their haunted farmhouse, but the fifth episode ends leaving viewers a bit stumped. It has been noted since the beginning that creator Ryan Murphy revealed that there will be a twist coming in the sixth episode.

“Something happens where half the cast is revealed to be doing something completely different than you’ve seen in the first five [episodes],” said Murphy, “You realize what you’ve been watching with some of the characters is not [who] they are. [The actors] had to do a mad scramble to find new voices and accents. It is a big turn. It’s the biggest plot twist we’ve ever done with the show.”

Along with the plot twist, the actors do a great job of handling this type of show. Matt and Shelby’s characters, played by Sarah Paulson and Cuba Gooding Jr.,  are relatable and realistic, and viewers can really empathize with this average couple going through terrible circumstances. The surrounding characters, such as the ghosts and paranormal experts, add a sense of abnormality, wit and malevolence to the show.

The setting of a farmhouse on what looks like acres of land adds a unique aspect to the storyline as well. It puts the characters in the middle of the woods, helpless and stranded when things go wrong. The farmhouse adds a rich history to the show that helps set the background information and tell the story. With its lively interference with the Millers and the story surrounding it, the house is almost a character in itself.

With the tenth episode and season finale four episodes away, it leaves the rest of the season for new characters, plot twists and a whole lot of scares. From what has been shown so far, I have really enjoyed this season of "American Horror Story," which is why I would give it an A rating.

Although the beginning is a little slow, suspense picks up quickly in the second and third episodes making it hard to stop watching. I believe the unique storyline and characterization in "Roanoke" is keeping viewers engaged, scared and craving more. If you haven’t watched "AHS: Roanoke," check out the FX channel on Wednesdays at 10 or catch up on past episodes on the FX website.