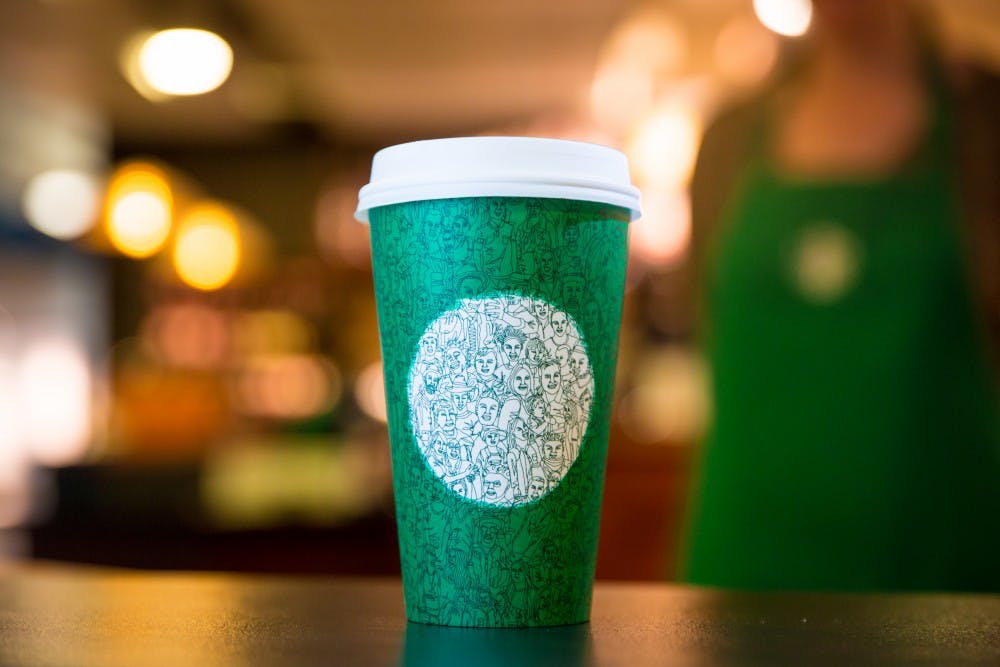 Before I begin discussing the confusion Starbucks' Christmas cups are causing this year, let us take it back to the holly jolly seasons of fall and winter in 2015. Once Halloween was over and Nov. 1 arrived, some began playing Christmas music and getting prepped for the holidays. Then the famous Starbucks red cups came out.

In the past, their Christmas cups have had pictures of reindeer and ornaments — however, in 2015, the cup design released in late October was plain red. No ornaments, no reindeer. Just plain red.

Starbucks did this in an attempt to display simplicity and purity. In regards to the cups, Jeffrey Fields, Starbucks vice president of design and content said, “In the past, we have told stories with our holiday cups designs. This year we wanted to usher in the holidays with a purity of design that welcomes all of our stories.”

Little did the company know what was coming. Thousands of people were offended by the cups, explaining that Starbucks was taking the religious affiliation out of Christmas. Videos were posted slandering Starbucks, and the hashtag #MerryChristmasStarbucks was created as people told the employees their name was Merry Christmas so baristas would write it on the cup.

At the time all of this chaos happened last year, I thought it was a joke. I watched the videos and saw all of the tweets proclaiming to stop drinking Starbucks in an effort to disown the company. Should a cup really cause that much of a fiasco? I didn’t think so.

After the seasons passed and the red cups were replaced with the typical Starbucks logo cups, the madness settled down for a while. And then … they released the 2016 cups on Nov. 1.

The 2016 cups released this year are green and display a drawing by artist Shogo Ota. A tweet by Starbucks explains the drawing is of “Friends, baristas, and customers drawn in one continuous line—reminding us we're all connected.” It aims to represent connection and community in our country, and the mosaic of interconnected people shows this.

In a post on Starbucks' website, Chairman and CEO of Starbucks Howard Schultz explained, “During a divisive time in our country, Starbucks wanted to create a symbol of unity as a reminder of our shared values, and the need to be good to each other.”

Oh, the backlash this cup is receiving. The newly released green cups are already bringing about mixed feelings from customers. Although the comments are nothing like Starbucks received last year, customers are still angry over the lack of red cups for the season. Starbucks drinkers have taken to Twitter to beckon their outrage over the green cup, although some are actually fans of the cups.

Leaked photos have also shown that a red cup might be coming starting Nov. 10, so Christmas cup lovers should have no concerns this season. However, with Christmas lovers and Starbucks fanatics, you never know.

My opinion? Coffee — and better yet, cups — has little to nothing to do with Christmas. Sure, it’s a drink that will warm you up on a chilly winter’s day, but in the scheme of things, it has no relation to the holiday and shouldn’t be treated as such.

I think the fiasco created last year was unnecessary, and it seems to me that people were just looking for an issue to get upset over. It blew up and got way too far out of control. Just because Starbucks is aiming for a more modern and culturally appropriate design opposed to previous years does not mean they are “boycotting” Christmas.

I believe that Starbucks' goal with the new cups is to include all cultures and religions, not just those that celebrate Christmas. It not only helps them profit-wise with a larger inclusion of customers, but it is more culturally appropriate for our day and age.

So for now, I wouldn’t fret over the green cups because no one knows what is coming with the new seasonal cups. As consumers, we can only hope the cups coming out on Nov. 10 are at least a little “Christmasy” for the sake of the drama it could cause if not. Fingers crossed that no more incessant backlash comes down on the green cups before the new seasonal cup release.