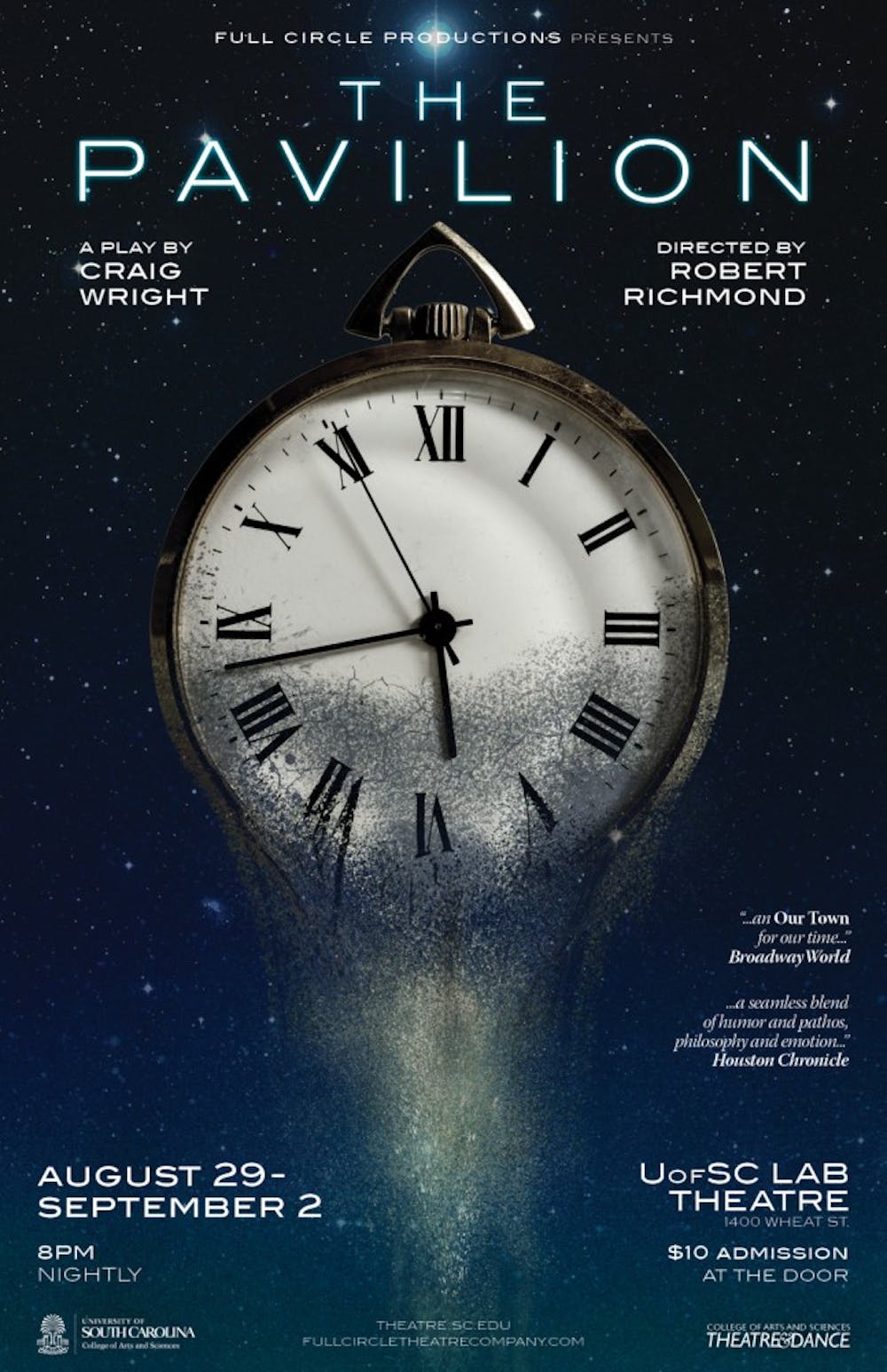 For five nights, Craig Wright’s “The Pavilion” at USC’s Lab Theatre tugged audiences through time on a cosmic trip to the very beginning of the universe.

We were brought back to the present through poetry that sounded like physics — or maybe physics that sounded like poetry — and seated at a high school reunion. The class of 1997 was suddenly in front of us, and we watched a story unfold that embodied us all in its portrayal of complex characters desperate for fulfillment — in search of something greater.

But let’s take a step back for a moment.

This production, though eerily poignant, was also hilarious. It was not the sly kind of funny that goes over most people’s heads, or the uncomfortable kind of funny that only a few people appreciate. It was comically appealing to the masses; the large majority of us were laughing audibly every few lines.

And the cast was incredible.

Jennifer Moody Sanchez’s main role was the narrator, but it was her ability to switch characters in a single breath that kept the audience on its toes. One minute she was the well-travelled, I’ve-got-my-life-together woman at the high school reunion; the next moment she could be that lovable pothead everyone knows, or the guy who had too much to drink, or the wannabe tough guy who never stopped wanting to be a tough guy.

The storyline largely centered around Andrew Schwartz and Lindsay Rae Taylor who played the roles of Peter and Kari — the “it” couple from high school whose relationship was ruined with youth, stupidity and the simple, inevitable passage of time.

I could see pieces of myself in each one of the characters. This must have been true for a lot of us at the show that night. It’s why we laughed so much and why we got emotional at scenes that resonated with us at a very fundamental, human level.

Peter was the part of you that thinks you can break the rules of the universe. He emphatically states that after he dies he will still remember everything. He is so sure that he will be the exception to the rule, the one who makes the impossible possible.

Kari thinks he’s full of it. She’s the practical piece of you that knows you won’t remember, knows you can’t do what is impossible, knows you’re not the exception to the rule.

She’s also that part of you that feels like you are the center of the universe, and feels the weight of every decision so heavily — probably because she understands that you can’t go back and change it.

Where Peter is the one to ask for another chance, for a do-over, Kari is the type to shake her head and say all there’s left to do is move on.

Director Robert Richmond and production designer Nate Terracio brought a play to the stage that told a rich and complex story, one that every human could identify with. Knowing that other people in the room have felt the “gravitational nausea” Kari described, or felt “cosmically stupid” like Peter, helped a group of strangers connect with one another.

And maybe that connection let us feel fulfilled in some way, like we stumbled on that greater thing we’ve all been hoping for, even if it only lasted for an instant — even though that instant lives in some metaphysical space that we will never pass through again.