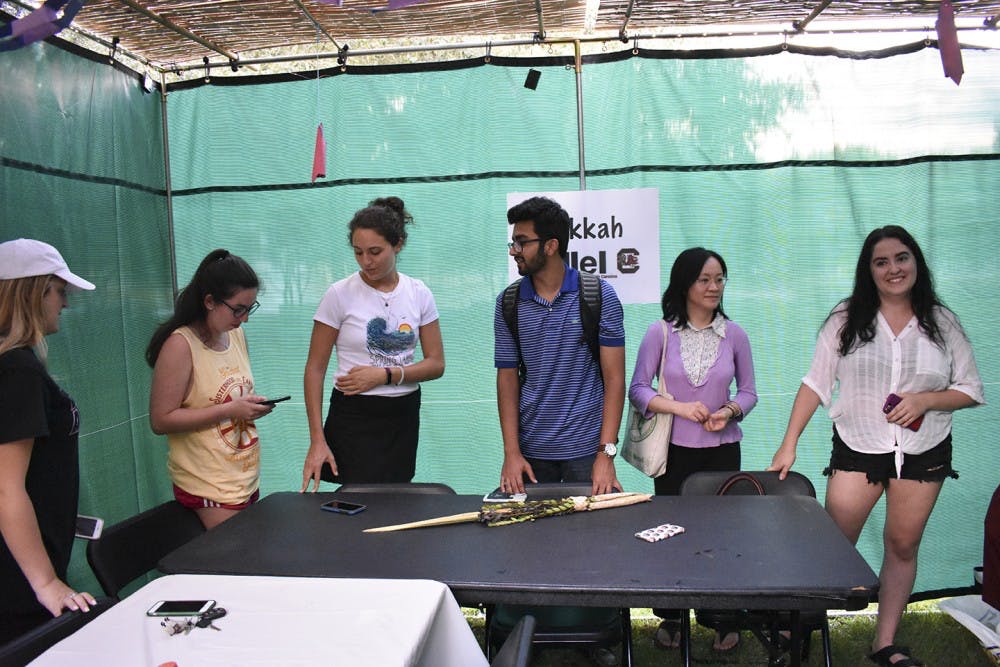 On a muggy October evening, a group of more than 20 students gathered on Davis Field to share a meal. A diverse group, they were brought together not just by the usual college-kid need for free food, but also a desire to bridge the main divide between them: religion.

These dinners, known as Table of Abraham, are meant to do just that. Throughout the school year, students from Hillel at USC, the Muslim Student Association and the Methodist Student Network come together to recognize the common threads of their religions and learn more about the differences between their faiths.

The Rev. Tom Wall, a leader of the Methodist Student Network, has brought students from his organization since early on in the event's history.

"It's about learning from each other, different faith groups," he said. "Because there's such ignorance, which leads to distrust, which leads to animosity and even acts of hate against one another because of misunderstanding. So this is the perfect example of how we can learn from one another."

Wall works with other faith leaders like Cheryl Nail of the Columbia Jewish Federation to put together these interfaith dinners.

Many of his students, like fourth-year public relations student Madeline Mulkey and fourth-year anthropology student, Bailey Caudle, enjoy the experience.

"One of our prerogatives this year is to experience each others holidays and events by attending each others' events," Mulkey said.

"When you're able to experience someone's religion not just from a textbook but to learn in person, it makes it more personable," Caudle said. "It allows you to make personal connections that go beyond a religious extent."

The most recent dinner fell during the Jewish holiday of Sukkot, a celebration of the harvest. One of the core traditions of this holiday is eating outside under a tent-like structure called the Sukkah. In order to allow Jewish students to observe the tradition and expose other students to the holiday, the group met under a Sukkah next to Russell House.

Fourth-year English and secondary education student Jenna Rosen, president of Hillel, was excited to give students from other faiths a chance to experience the holiday.

"It's also a holiday about inviting people in and being kind to your neighbor, having them come to eat with you," she said. "Which is the perfect occasion to have Table of Abraham."

In addition to learning about Sukkot, all three organizations shared information about the important holidays and celebrations in their faith. From Easter to Yom Kippur to Ramadan, the students were able to compare and contrast their traditions.

"It's good to know [about the holidays] and I get to know these people now too," he said.

Still as the conversations continued, similarities were discovered. Ayub and Rosen noted that Muslim and Jewish children begin observing the fasting aspects of their respective holidays around the same age. Mulkey added that some Christians also observe a sort of fast during Lent.

And as the night continued, the talk went beyond religion. Rosen was excited to find that Ayub had played the Taylor Swift song "22" on his recent 22nd birthday. He shared a Snapchat video of him singing the song with the group.

For Rosen, these conversations are what make Table of Abraham worthwhile.

"We have a lot in common with each other," she said, "but it's also nice to sit down and talk about our differences too. It's good because it bring us all closer together and it helps us to break awkward boundaries ... I'm really happy to be a part of it."

Nail, Wall and other leaders try to get their students together as much as possible. Often the dinners coincide with a religious holiday, but the goal is to get together as frequently as once a month.

"It's an easy way to start with a point of agreement, to start with some point that we have in common," Wall said. "So from there I think if you start to realize you have things in common, then it can springboard into cooperation."