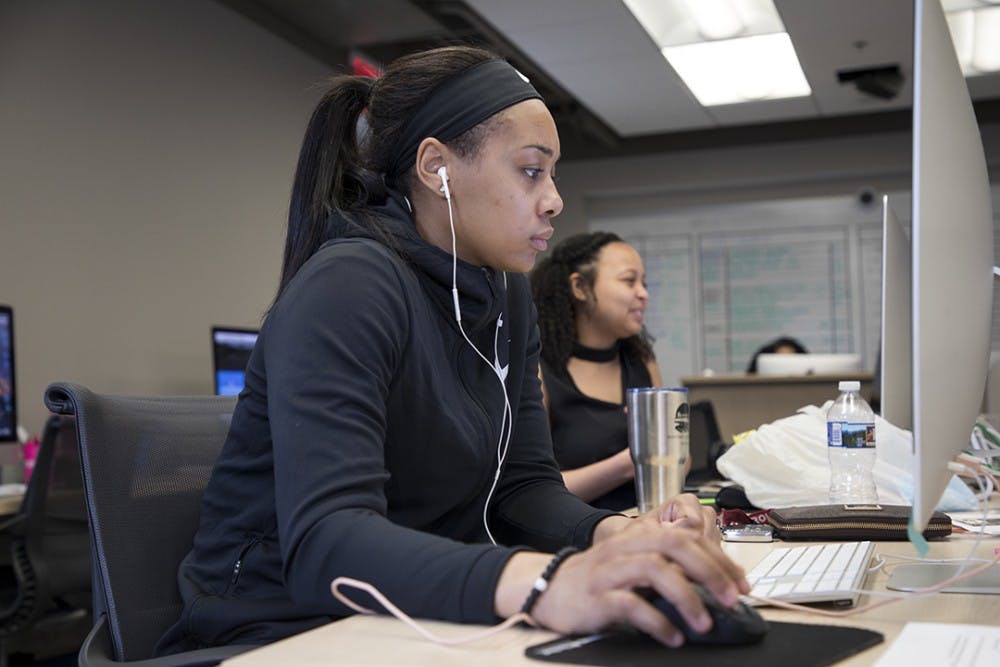 From national champion to WNBA to the newsroom: Allisha Gray's journey back to Columbia

A year ago Allisha Gray had a choice to make. She had just a few hours to make a decision that would change her life and her career: was she going to enter the WNBA Draft or was she was going to stay in Columbia and finish her classes?

Just a few hours before the draft deadline, Gray made that choice, but not without first making a promise.

“Before I declared for the draft, I made a promise to my parents that I would come back and get my degree following the season,” Gray said. “And here I am now, fulfilling that promise.”

Now, just a few months after completing her first season in the WNBA and winning the league's Rookie of the Year award, Gray is back in Columbia completing her degree in broadcast journalism.

To graduate, Gray has to complete the School of Journalism and Mass Communications' senior semester program, which involves working in a newsroom environment from 9 a.m. to 5 p.m. every day, rotating through different newsroom jobs each day. Coming back to school after taking time off can be tough, and jumping into what is basically a full-time job was a big adjustment. Still, Gray said she's enjoyed being back.

"Senior semester has been a lot of fun. I was definitely nervous coming in here, about the class and about the timing and stuff, but my classmates, they definitely made the class a lot [more] fun and easier for me to adjust," Gray said. "I definitely feel a lot calmer and at home within the classroom. But overall, it’s taken some of my shyness away also because I’m a very shy person ... I don’t mind being in front of the camera anymore."

During the few short months of this spring semester, Gray has grown in all aspects of newsgathering, which she believes will help in land a job in the field after her career in the WNBA is over. Her senior semester professors have witnessed the same improvements that Gray has seen in herself.

"She’s done everything that we’ve asked her to do, even things that she’s been uncomfortable with," journalism instructor Greg Brannon said. "She takes coaching, or critiquing, very well and she understands it’s meant to make her better. She’s gotten better in front of the camera, she’s gotten better behind the camera and it’s been fun to watch."

Gray’s determination is what helps her succeed on the court and in the newsroom. Journalism instructor Rick Peterson was pleased to see her transition from professional athlete to professional journalist.

"She has such a strong work ethic that she must be so highly disciplined to be so good [in] her own field, she’s just kind of brought that same kind of work ethic to what we do," Peterson said. "You can kind of see what makes her so good on the basketball court. She just has this strong, strong work ethic."

Gray used that work ethic to get selected fourth overall by the Dallas Wings in the 2017 WNBA Draft. The 2017 draft was a busy one for former Gamecocks, as Alaina Coates was taken second by the Chicago Sky and Kaela Davis was selected tenth by Dallas, giving Davis and Gray another chance to be teammates. Gray said having Davis to go through her rookie season with was a huge advantage to the adjustment process.

And getting to play right down the road from where she and the Gamecocks won a national championship means a lot to Gray.

Now, Gray is even more ready to get back to Dallas and really start preparing for another go-around. The guard is getting ready for her second season with the Wings and is eyeing an even more successful season. Gray wakes up at 5 a.m. every day to go workout and practice before class. She sometimes trains after class as well. After the rookie season she put together, she's ready to show off what she's been working on to improve and hopes to earn All-Star honors this season.

Although she’s excited for the upcoming season and moving back to Dallas, Gray is happy that she had one last semester on the USC campus, giving her the opportunity to reminisce about last season and her team’s successful national championship run

After helping the Gamecocks win their first national championship, Gray had a very small window to decide what to do with her professional and academic careers. She leaned heavily on others for advice.

"I'm talking to my parents, all this stuff, and then my go was when I talked to my academic advisor, I found out that if I stayed or left I was still going to graduate in May, so that kind of gave me the go-ahead to go ahead and leave for the draft and follow my dreams," Gray said.

This May is a busy time for Gray. The WNBA season tips off May 18, and just six days prior, Gray will complete the promise she made: She'll graduate from the University of South Carolina. While she's excited to get back with her teammates, she's even more excited to be back in Colonial Life Arena, dressed in much different attire than what she's used to.

"I’m not missing graduation for nothing," Gray said. "It just shows that all the hard work I did, and even ... in the season, I was doing online courses so school never stopped for me. So just to get that degree and just to walk across that stage and hear my name called; I may run across the stage, I’m so excited."

Even though she only played one season in garnet and black, Gray feels right at home at South Carolina, and that's what made her so excited to come back to finish her degree. From the moment she first decided to transfer away from North Carolina to the day she brought a national championship to Columbia, Gray knew that this place would always hold a special place in her heart.

"Coming into South Carolina, it definitely felt like home to me and that played a big part of me choosing to come here and transferring from UNC," Gray said. "The fans are great, Gamecock Nation, best fan base in the nation ... So I felt real at home here."