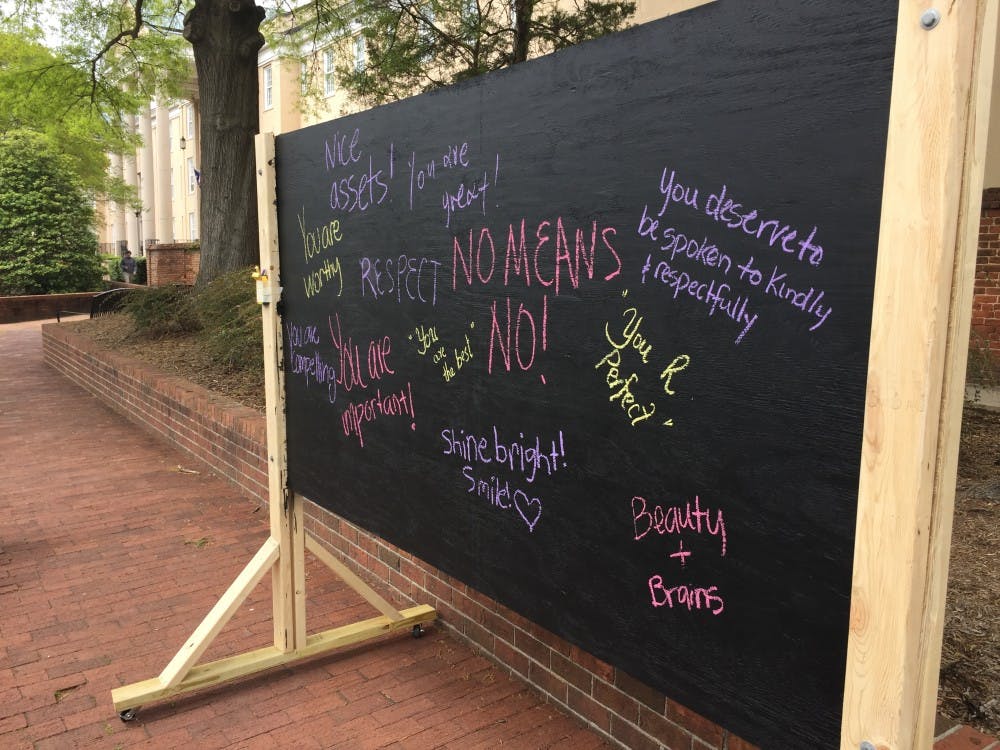 Denim Day began 19 years ago in Italy when the Italian Supreme Court overturned a decision about a sexual assault case because the victim was wearing jeans. The jeans were tight, and the justices believed that the victim had to have helped the assaulter remove her jeans, suggesting that she gave consent. The next day, the women of the Italian Parliament went to work wearing jeans, protesting the decision.

Now, Denim Day is an important part of Sexual Assault Awareness Month, and at USC it will be the closing event on April 25.

Jennifer Taylor, program coordinator for bystander intervention, hopes to use the month to reach out to students and make them aware of the Sexual Assault and Violence Intervention & Prevention services in the Thomson Building — specifically the organization's confidentiality. The events were tailored to students so that students do not have to speak up to participate, but can still interact with others and learn more about the issue.

“I think the biggest thing, really, that we want from students is for them to just have conversations,” Taylor said. "We want this to be an opportunity to really kind of look at their own conceptions."

Third-year psychology student Regan Butler believes the campaign is crucial to the health and safety of students on campus.

“Although that we don’t want to think that it’s happening on our campus, we know that it is,” Butler said. “I think it’s good to bring awareness.”

With movements such as #MeToo and #TimesUp growing their influence on social media, Taylor wants to keep conversations surrounding sexual assault and consent alive on campus.

“A lot of stuff that went unsaid in the past, those problems ... didn't stop existing because people weren’t talking about them. They were still sort of just under the surface,” she said.

Taylor values the feedback of students about the activities planned for the month, and hopes that students will participate, create relationships and teach each other something, whether they are a survivor or a supporter.

“We also really just want to make sure that students feel supported, and that they have the opportunity to also offer that support to one another,” Taylor said. “Students working on behalf of one another and working to support one another is very powerful.”

On Wednesday, the Sexual Assault and Violence Intervention and Prevention office held a table on Greene Street for an Anti-Street Harassment event. Students were able to write on a chalkboard different words of encouragement and words that had been called to them on the street.

“I feel like street harassment is something that happens all the time, but nobody really talks about it,” said Tayler Simon, the organizer of the event and a graduate student in social work.

Walk a Mile in their Shoes will take place on Thursday, and the Clothesline Project, where students will be able to decorate a shirt to recognize victims and hang it on a clothesline on Davis Field, will go on from April 16 through April 19.