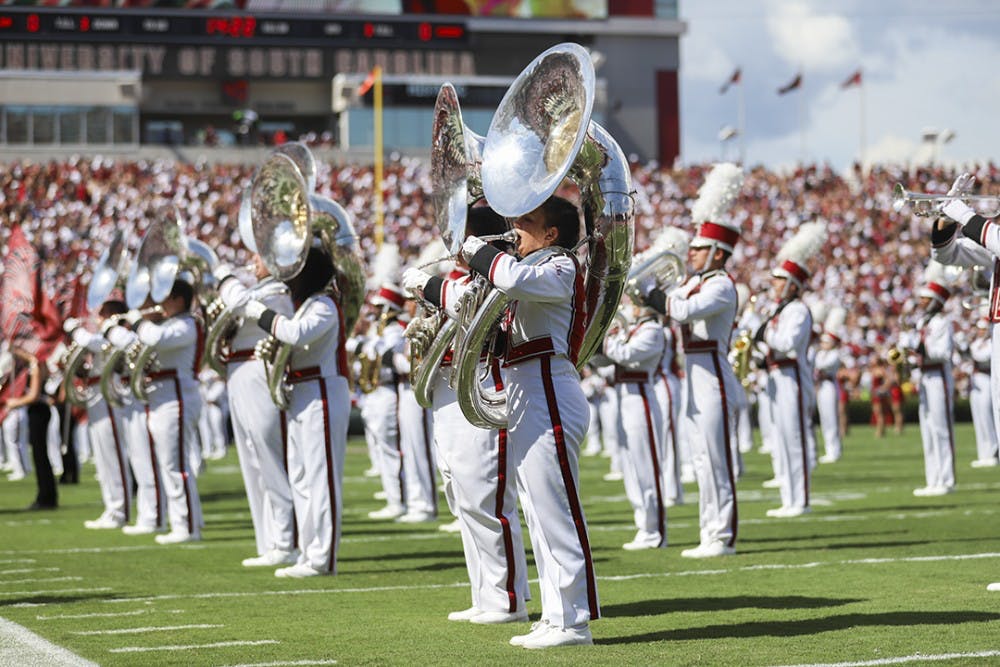 Questions are being raised about the health and well-being of band members performing in almost triple-digit temperatures during early season games after a member of the Carolina Band required medical attention following Gamecock football's opening game.

A member of the Carolina Band confirmed to The Daily Gamecock that they were transported by EMS and treated for effects from heat after the Carolina Coastal football game on Sept. 1.

Cormac Cannon, associate director of bands and director of athletic bands, acknowledged that an incident happened during the first game of the season.

“I can’t comment on the medical treatment of a specific student, but I can tell you that the student was treated and released and went about the rest of their weekend with no ill effects and was back in school and back in rehearsal on Tuesday,” he said.

The temperature reached a high of 96 degrees that day, seven degrees above the normal average for Columbia in early September. In preparation for extreme temperatures, Cannon, along with the athletic trainers make sure that the students are hydrating as much as possible.

Still, some band members say heat issues are hard to avoid. Two members of the Carolina Band agreed to speak to The Daily Gamecock on the condition of anonymity out of fear of ostracization. The Daily Gamecock knows their identities.

“The band makes sure we’re really well hydrated. It’s just like sitting out in the sun for a very, very long time is kind of problematic,” one band member said. “And that’s not the administration’s fault or anything. That was just the nature of living in South Carolina and being in a marching band in August or September.”

According to a university statement, students were given a break following the halftime show during the second half so that they could rehydrate in the shade instead of returning to the stands.

“The other things that we do when it gets very hot is we try to avoid extra exertion where possible,” Cannon said. “So for instance last Saturday was very hot so in the stands in the second half we took the opportunity during a few of the timeouts to have the students sit rather than standing and doing choreography and exerting themselves that way and playing. So when possible we give them a break.”

Other breaks and adjustments were added to the schedule to ensure that students did not suffer from heat exhaustion or anything more extreme.

“Usually before we do pregame we’re sitting in the stands for a full hour before we even go down to march pregame. And that’s time when we’re sitting in the sun in our uniforms. We’re not doing anything, but it’s sun exposure,” the band member said. “Now they’re using that time for us to leave our instruments in the stands and then go down under the stadium to be in the shade for a while, so that reduces time your skin is in the sun, and then reduces potential heat exhaustion.”

While in the stands, the 365 members of the Carolina Band are wearing wool uniforms. According to a band member, the jackets have five layers of material, and the pants have three layers. Cannon encourages students to un-clip the top of the jackets to allow for a slight breeze through the jackets. However, the band member said some do not find this measure very helpful.

“Our jackets zip up all the way to our necks and they clip,” they said. “So in some sense, having some freedom around your neck I guess is helpful, but for the most part it did borderline nothing ... I think just continuing to wear the fabric on my body was a lot.”

The Carolina Band receives new uniforms every seven years, according to the band member. Students are hoping that the next uniforms are made of lighter, more breathable material to make afternoon games in September easier. Until then, the student said they think band members should have permission to remove their jackets during extreme heat.

“I would say that if anybody did anything we could have taken off our jackets. I think that’s something that a lot of college bands do,” they said. “Ohio State’s band does it and they’re arguably the best college band in the country, and they take off their jackets in the stands and they live in Ohio, not South Carolina.”

When asked about the removal of jackets, Cannon said the band doesn't perform in partial uniform.

“Hundreds of people in attendance experienced heat stress, many of whom were wearing shorts and t-shirts. The clothing one wears is only one factor among many that may contribute to heat stress,” Cannon said.

There were no reports of extreme adverse reaction to the heat during the UGA game on Sept. 8. After Sept. 1, students said they were more prepared to handle the season with the help of Cannon and athletic trainers.

“It was just one of those instances where no one could have really done anything differently because Mother Nature decided to play a trick on us,” another band member said.