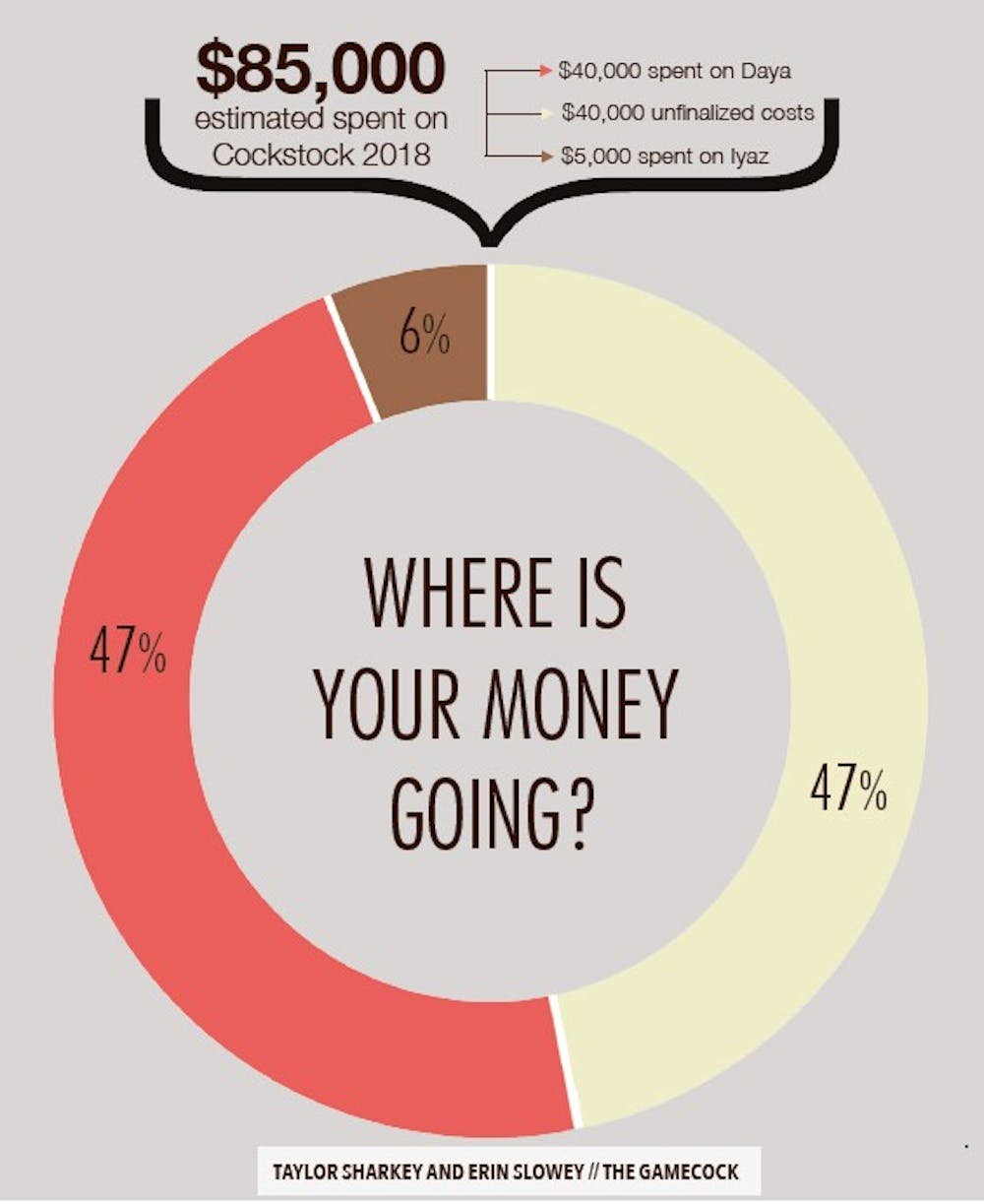 By Taylor Washington, and Genna Contino

One of this year’s headliner is Daya, a pop singer best known for her feature on The Chainsmokers' Billboard No. 3 hit, “Don’t Let Me Down" and her own single “Sit Still, Look Pretty.”  The other is Iyaz, a British Virgin Islander artist who lingers in many minds as the mastermind behind the lyrics, “Shawty’s like a melody in my head.” His single “Replay," charted No. 2 on the Billboard 100 for one week in 2009.

“We’re in a completely different genre, which I think is exciting and everybody’s heard Daya’s songs on the radio, and Iyaz is kind of like that middle school artist that everybody has heard ‘Replay’ on replay,” said fourth-year public health student and Carolina Productions president, Rebecca Kaze. “Nostalgia’s really trendy right now.”

This year’s Cockstock budget has yet to be finalized, according to Kaze, but she estimates the total cost of the event will come out to around $85,000. Daya cost $40,000 and Iyaz cost $5,000. The rest of the budget is still unknown, Kaze said.

This budget isn't too far off from the past two year's Cockstocks. In 2016, Rae Sremmurd headlined on the Strom Thurmond Fitness & Wellness Center fields for the event's debut. The total cost of the show was $88,461.08. Last year, 21 Savage headlined in Colonial Life Arena and, a show that cost $101,678.71.

Cockstock was first created in 2016 by former student body president Michael Parks, and it was one of the foundations of his campaign. Since then, the annual concert has taken on a life of its own and has become a Carolina homecoming tradition.

Carolina Productions, Homecoming, Student Government and the Residence Hall Association are the key decision makers for the event. Like every other Carolina Productions event, the budget for Cockstock is entirely funded by the money USC students pay in student activity fees that are then distributed to organizations.

The process of choosing headliners involves a lot of research and a lot of luck, this year's organizers said. Just because Cockstock organizers express interest in a potential headliner does not mean that the deal is sealed. The artist must accept their offer and agree to adhere to their guidelines. Sometimes offers expire, artists refuse to accept the university’s terms or negotiations simply break down.

Delaney Ruth, a fourth year-retail management student and executive commissioner of Homecoming, said that one of the biggest misconceptions students have about Cockstock is that the university has an unlimited budget.

“People who haven’t put out a single in years still want an unrealistic amount of money,” Ruth said.

Even though last year students saw 21 Savage perform at Colonial Life Arena, this year, Cockstock organizers have opted to relocate the concert back outside.

“I think it was important for us to bring the concert back outside, just because ... we really wanted to go for the festival community feel, that it’s creating a really positive vibe on campus,” said Stoudemire. “'Cause the goal from Cockstock from the beginning was to make it a tradition and make it a thing that people get excited about and know about.”

However, the decision to bring the concert outside isn’t without its sacrifices.

Ruth, describes this year’s show as PG-13, meaning the headliner had to refrain from using both the n-word and the f-word.

Rae Sremmurd, the hip-hop duo who headlined the first Cockstock, was a big hit with students, but not so much with the nearby neighborhoods that surround campus.

Another factor that prompted the return outdoors was the heavy price tag that came with renting out Colonial Life Arena. Last year, the venue accounted for $22,961.58 of Cockstock’s $101,678.71 budget. Security, staff, restrooms and fire marshals were just a few of the reasons behind the arena’s cost.

Nonetheless, 21 Savage was able to bypass the content restriction because his show was held indoors.

“I was sad about T-Pain. I think our restrictions aren’t too harsh,” Ruth said.

However, both Kaze and Ruth said they respect the rapper’s right to artistic expression. While they are pleased with the decision to move forward with Daya and Iyaz, both still anticipated pushback.

“We know that for two years it’s been a hip-hop show ... and anytime you make a drastic change like that, there’s going to be some questioning, and some negative reactions, and we knew that that was gonna happen,” Kaze said.

First-year biology student Amaya Campbell said she wasn't impressed by this year's lineup and believes that more students would attend the concert if there was a rap artist headlining. She was one of the many students who expressed their negative reactions to the announcement on Twitter.

“I thought it was a joke at first. I thought that the Carolina Productions Twitter page, I thought they were gonna come out and say ‘psych’”, Campbell said.

Interest polls have been offered to students in the past, but Cockstock organizers said they have realized that they cannot always promise that the winner of the poll will be booked.

Like Kaze and Ruth, vice president of the RHA and second-year biochemistry and molecular biology student Patrick Greene, believes that all of the organizers have done the best that they could, and has accepted that they cannot please everyone.

“I’ve been asked why aren’t we having Drake come,” Greene said. “I mean, Drake is like, over a million dollars to have come perform and you know, we just simply don’t have that sort of budget.”

Although some students have voiced negative reactions, other students are excited to have Daya and Iyaz come to campus.

Cockstock Student Reactions from Arts and Culture on Vimeo.

Second-year business student Kelly Gosciminski said the show is something she'd be interested in attending.

"It kind of brings everyone together as a community. It's a school event, and I know you can go for free and it's kind of like an added bonus ... because I know a lot of people pay a lot to come here, so to not have to pay to go to a concert is kind of nice," Gosciminski said.

Cockstock will take place Friday, Oct. 26 on Greene St. Fields. Doors open at 6 p.m. and the show begins at 7 p.m.