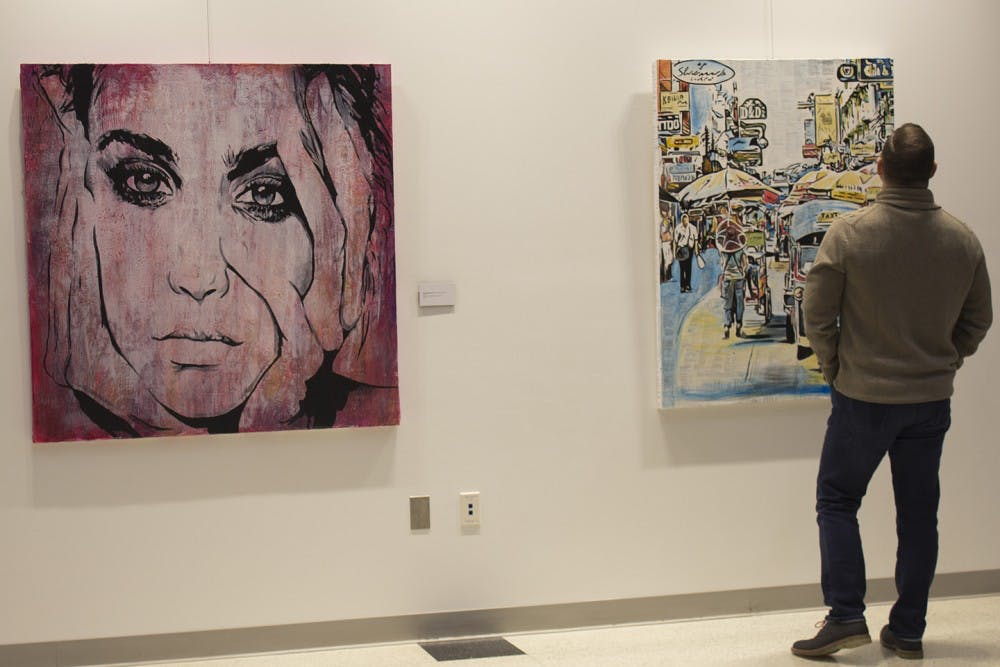 Driving down Rosewood Avenue, you might notice the bright yellow, blue and red mural on the side of Peeble's Wing Shack. The mural, which features a giant rooster, was created by Columbia native Shelby LeBlanc.

On Nov. 9, Richland Library Main on Assembly Street had a showing of the local artist and muralist's contemporary works. The show included a multitude of diverse paintings for LeBlanc’s fourth solo show.

LeBlanc’s initial plan for her future featured nursing school. This idea was quickly cut short when deeper exploration of her creative side began to intrigue her more than lab coats and anatomical structures.

“I was actually studying to be a nurse with Midlands Tech. I had to get my tonsils taken out just from strep happening every few months, and when it came down to me going back I had already started doing this and I had a different job at the time and I just wanted to see where one of them would go. And this one ended up being the winner,” said LeBlanc.

Although she realized nursing school wasn't for her, LeBlanc never attended a traditional art school. LeBlanc’s sister works for Savannah College of Art and Design, but LeBlanc herself never attended art school. She said her family would love to see her attend art school and is still letting it sink in that she's created a career out of it. LeBlanc is completely self-trained and looks forward to creating art for the rest of her life.

“This is what I do and I love it. I don’t think that art school would have made this any less or more capable,” LeBlanc said.

According to LeBlanc, her passion for painting stems from her travels and dates back to her childhood. She travels to relax, as well as for inspiration. LeBlanc thinks traveling is beneficial because it gives her a break and opportunity to get away from people.

“I grew up for the most part in Columbia, South Carolina. I was very fortunate, was able to travel a lot in high school, and even before high school I saw a lot of the continental U.S. and traveling has always been really important to me and it’s incorporated in a lot of my artwork. I like to paint what I see and that’s something that has been the case since I was a little kid.” said LeBlanc.

LeBlanc’s paintings each have their unique qualities, which is why she finds it hard to pick favorites. Though LeBlanc’s first piece ever created was made using materials from Michael’s craft store, she has since started using other materials in her art.

Some common materials LeBlanc has used in her recent works are acrylic paint, polycrylic and paper. A lot of the works featured in the show are different from the works LeBlanc usually makes because they are mostly paper instead of acrylic. LeBlanc incorporates paper into her work because it’s unique and she has discovered a variety of ways to manipulate it.

“I like the aesthetic that it gives, I like the textures that it gives. It gives a shading without actually having to use paint and I like having it somehow incorporate into the image. It gives it not just depth from the shading aspect, but also meaning as well.”

LeBlanc’s paper is primarily from Ed’s Editions, a used bookstore in West Columbia. She has been going to the store consistently for about three years now. Given the work LeBlanc puts into collecting her materials and creating her pieces, she never knows exactly when a piece will be finished.

“It depends on the detail, it depends on the subject matter but for the most part I’m one of those people that when I start something I can’t stop and I just work at it like a puzzle until it’s finished," said LeBlanc. "I have a studio in my home and it's open to people if they want to come see it although there’s now no artwork in it because it’s all out here.”

Some of LeBlanc’s favorite artists include Jasper Johns, Henri Matisse and Andy Goldsworthy. LeBlanc enjoys a variety of artists, not necessarily because it matches her style or skill level, but because of the uniqueness of their pieces. She values individuality in her own work describes her style as bold and engaging — particularly the set of pieces she showed at Richland LIbrary.

“These are special ... because these are going to be originals. They might be one of a kind and I plan on there being several series like this," LeBlanc said.

Some of LeBlanc's other pieces can be seen at local Columbia businesses including The Casual Pint, Saki Tumi and Craft and Draft.