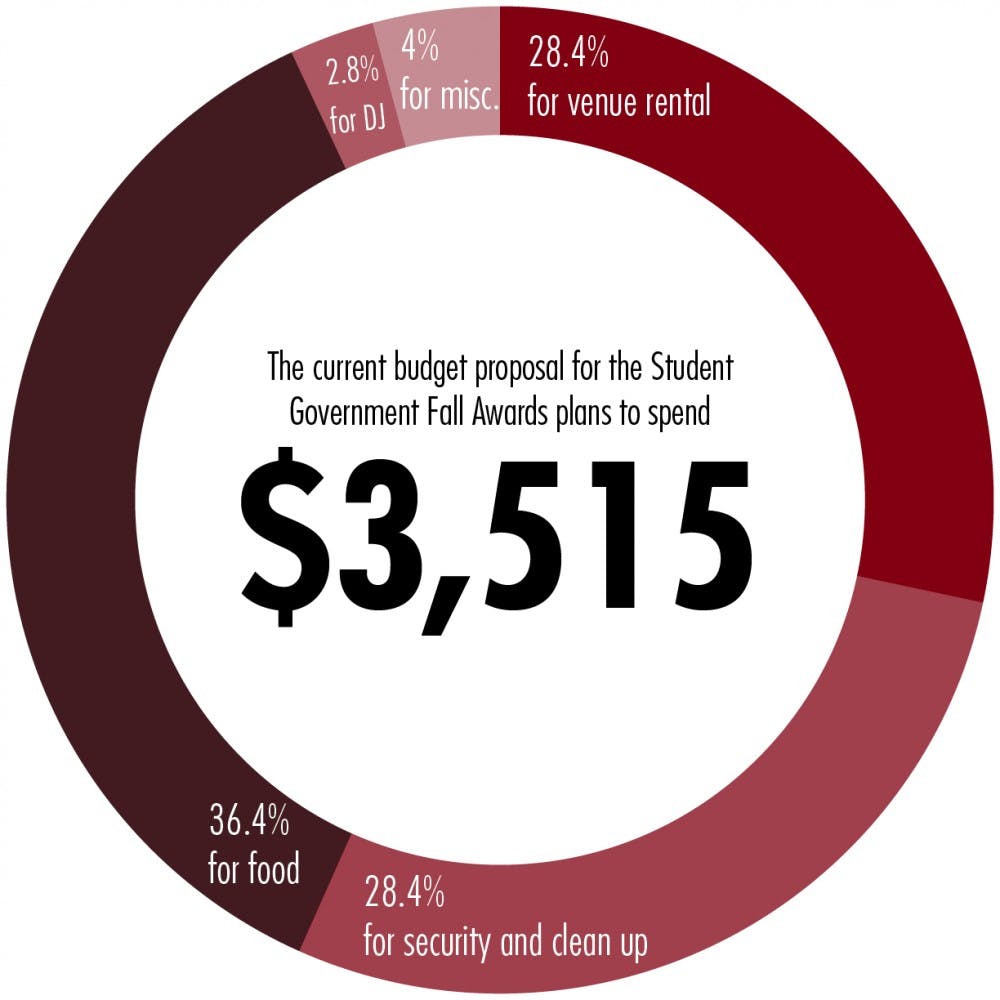 The University of South Carolina’s Student Government will hold a formal event called the Student Government Fall Awards on Nov. 29 at City Art Gallery at 8 p.m. and plans to spend $3,515 on the event — more than $1,000 above its original budget.

Although Student Government says the event is free and open to all students — as is required of other student organizations when they request funds from Student Government for social events — the organization did not advertise the event other than inviting student leaders from certain organizations, failed to send out the RSVP Google Form to the student body, asked attendees to pay a $5 donation for food in advance and booked a venue that can hold a maximum of 300 people.

Student Body Vice President Mills Hayes, who led the planning of the event, said the donation was not necessary to attend.

“When we got into office, we didn’t think [the Student Government Ball] really was appropriate or really represented what we wanted to get out of the event,” Wright said. “So, initially branded as the Student Leader Ball, but I think we kept reflecting and it still didn’t quite completely say what the event actually was, so now we’re looking more at kind of a Fall Awards.”

Wright emphasized the importance of taking the event to an off-campus venue.

“Although we love Russell House, I think we just don’t want to have everything in one building. I think you kind of gain something with having a change of scenery,” Wright said. “We’re in here every day, so I think it’s kind of fun to leave Russell House and get to meet people outside of a professional setting.”

Student Government set aside $1,500 in this year’s budget for the Fall Awards, a significant cut from the last year when $2,900 was budgeted for the event.

However, Student Government has not adhered to this year's budget as it is currently planning to spend $3,515 for the Fall Awards — $2,015 more than cited on the original budget. Of that $3,515, $1,280 are food costs. As of Nov. 20, donations cover $1,165, leaving Student Government to cover the leftover $115 in food costs. This is the most expensive Student Government formal event in recent years, according to the organization's fiscal records.

In a letter to the Student Senate requesting more money for this year's event, Hayes said the additional funding would make the event “successful and tasteful.” She later said in an interview with The Daily Gamecock that the Fall Awards would allow student leaders of various student organizations to communicate with each other and collaborate with the student body.

“Student leaders are first and foremost students,” Hayes said. “I think it’s really important to recognize your leaders and really encourage them to continue their hard work.”

While Student Government exceeded its budget for the Student Government Fall Awards, the Student Senate Finance Committee has allocated a total of $4,207.62 this year to other student organizations' formal events, such as the Methodist Student Network’s Winter Ball, the Association of African American Students 50th Anniversary Celebration in the Russell House Ballroom and the Individuals Respecting Identities and Sexualities Fall Formal.

All of these events were free and open to all students, as is required in order for money to be allocated.

Editor’s Note: The editor-in-chief of The Daily Gamecock was invited to the Student Government Fall Awards and will not attend.