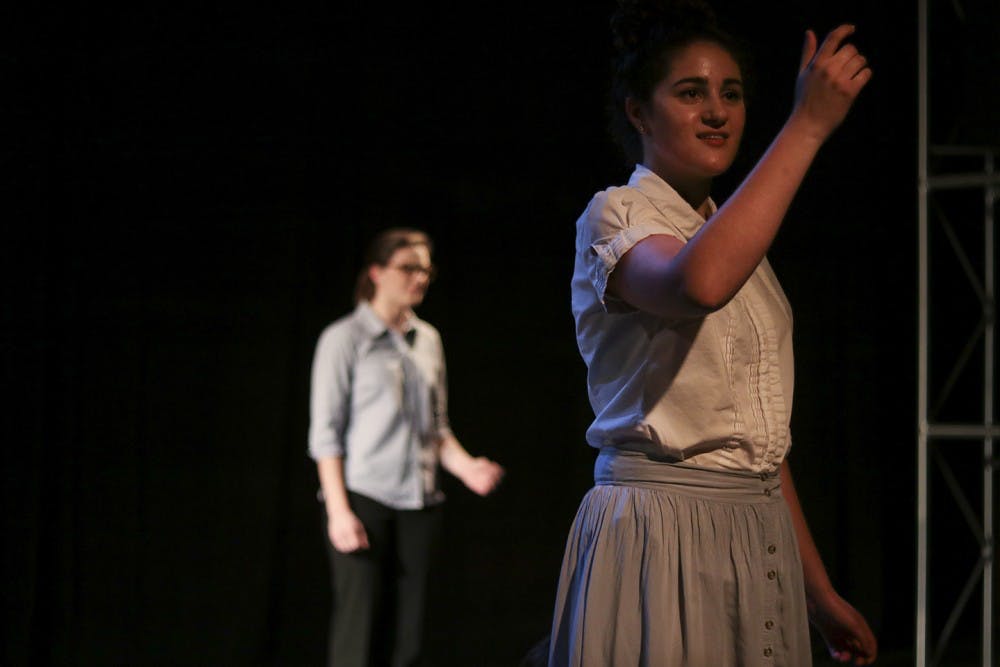 Using the power of words as an underlying metaphor for the strength in every woman, the USC Department of Theatre and Dance will present "Eleemosynary" starting Nov. 15.

"Eleemosynary," written by Lee Blessing, follows a family of three generations of women who have their own distinct idea of what it means to be a woman. The first of the women, Dorothea is the matriarch of the family and is played by second-year English student Lilly Heidari.

“Dorothea is kind of a wildcard character," Heidari said. "A big part of Dorothea’s identity is how she uses eccentricity to deal with big problems in her life ... She deals with her struggles by being weird and putting on a mask of confidence.”

Dorothea is the mother of the second woman, Artie, played by second-year theatre student Susan Swavely. Artie plays a definitive role in the family dynamics of the three women.

“Even though she’s the force between Dorothea and Echo that technically connects them, she’s also what pushes everyone apart and she adds to the stress of the family,” Swavely said.

Finally, there is Echo, the daughter of Artie and granddaughter of Dorothea. Echo is played by second-year mathematics student Payton Smith. Echo is the cornerstone of the story.

“Echo’s the reason that ... all three of these women, but especially these two actually tells her story," Smith said.

The majority of the play focuses on the relationship between these three characters and the portrayal of strength, femininity and matrilineal relationships.

“A lot of our emphasis has been placed on where tactic changes occur and the women’s intentions," Heidari said.

The set of the play is purposefully stripped down to highlight that emphasis. Prominently lined with stacks of books, the set is designed to create an intimacy with the audience and emphasize the power of words. The dynamics between the characters and an intimate view of their thoughts are the focus rather than the characters' surroundings.

That intimacy is further solidified by a nonlinear timeline with flashbacks and flash-forwards that mimic the fast-paced thought processes of the characters. The action follows the inner thoughts of each woman and the characters are written with insecurities that serve to make them accessible to audiences.

The production was directed by first time director and third-year graduate MFA student Libby Hawkins. Although the original script of "Eleemosynary" was written in the 1980s, Hawkins believes its themes are still relevant to the modern-day struggle and elaborate standards expected of women.

"Some of these universal things about this play are the fact that women still struggle with who they are, what their identity is, who helps them form their identity," Hawkins said. "And the things that we sacrifice sometimes in trying to be who we think we’re supposed to be.”

"Eleemosynary" will be playing at the Center for Performance Experiment from Nov. 15 to Nov. 18. All shows are at 8 p.m. and tickets can be bought online or at the door.