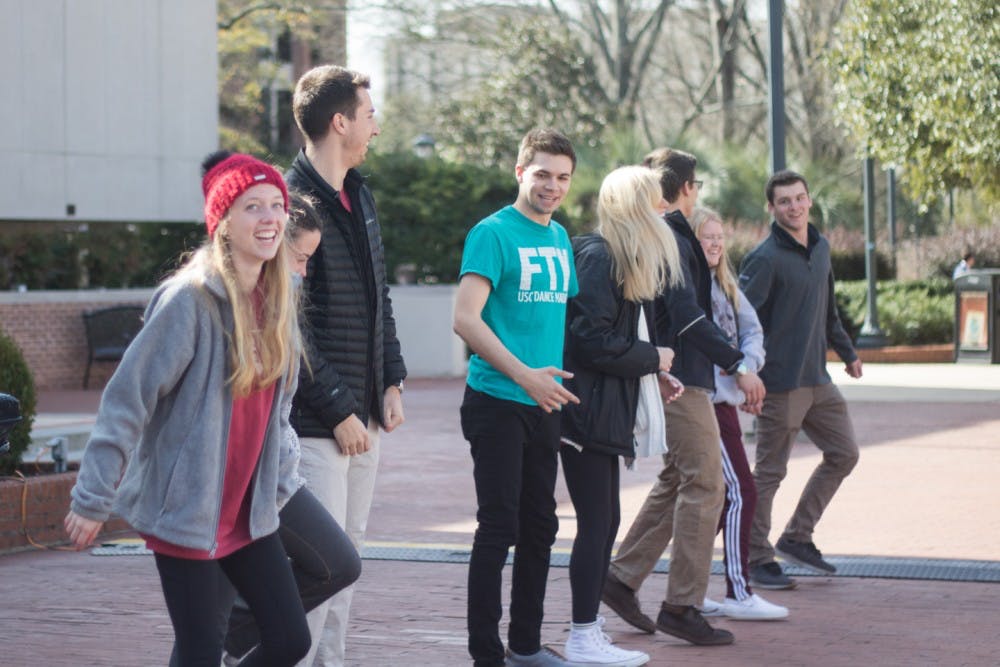 The letters "FTK" become commonplace during the spring semester at USC as over a thousand Dance Marathon participants students gear up to dance and raise money "for the kids."

But Wednesday leading into Thursday, "FTK" actually stands for "Forever to Thee Kids" Day, which is Dance Marathon's race against a 24-hour clock to raise $119,000 for the Children's Miracle Network.

Dance Marathon staff — the "morale" and "ignite" teams — took to several different spots on campus: Swearingen, Darla Moore School of Business, Russell House Ballroom, outside Thomas Cooper Library and on Greene Street. From there they shared the organization's message focused on the power of working together toward a common goal.

“I really like just seeing everyone really come together and start to get activated,” said Meghann Lange, director of fundraising and fourth-year exercise science student. “This is really the day that our heroes and our campus really start to get involved in Dance Marathon, so it’s really exciting to see how they can make an impact.”

Participants in Dance Marathon (USCDM) are known as heroes. This year, heroes are tasked with raising $119 to participate in the main event, which will be on March 2. The 119 reflects the ultimate goal of $1,119,000 Dance Marathon hopes to raise for the Children’s Miracle Network and their Child Life programs.

“We’re trying to be present as much as possible and just get people really excited, no matter what part of campus they’re on or what student organization they might be in, that they can be a part of this day with us, too,” said Kaity Lynch, USCDM president and fourth-year marketing student.

Grace Chadwick got involved with USCDM after meeting the miracle families, families who have a child cared for by the Children’s Miracle Network. Now, the fourth-year public health student serves as the organization's vice president for community relations.

Last year, Dance Marathon had approximately 2,300 participants. So far, approximately 1,700 students have registered to participate in the main event, where participants dance for 14 hours, meet the miracle families and fundraise up until the final fundraising reveal.

For many participants, Forever to Thee Kids Day marks the beginning of their fundraising towards the ultimate goal. Lange said she hopes the "heroes" see and feel the impact they'll make.

"And so really just getting them activated is kind of my responsibility for today and what I hope we can get out of it,” she said.

Forever to Thee Kids Day began at 10 a.m. on Jan. 30 and will end on Jan. 31 at 12:55 p.m. with a final reveal of how much was raised. All of the money will go to the final fundraising total, which will then go to the Children's Miracle Network's Child Life program.

One of Lynch’s favorite parts of Forever to Thee Kids Day is watching the heroes reach their fundraising goals, but she's most excited about the reveal because it marks their achievement in just 24 hours.

“Just watching people understand that we have so much power when we come together is just really one of my favorite parts about Dance Marathon as a whole and this fundraising push day,” Lynch said.