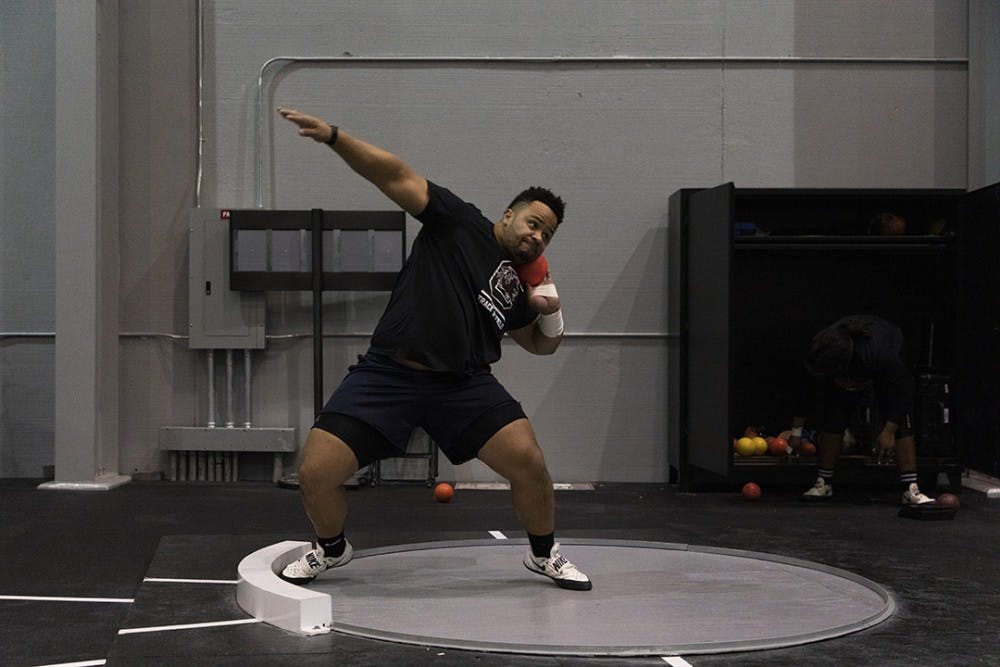 South Carolina shot putter Eric Favors has always had a passion for track and field. He even decided to put being a football player on the back burner to pursue his goals in the throwing circle.

Even with being ranked the No. 1 shot putter in the nation at North Rockland, Favors knew that it was going to be a growing process to get where he wanted to be as a thrower.

“We redshirted him his first year and here we are in year four now, and so much about everything now is maturity and confidence," assistant coach Mike Sergent said. "When he got to USC, we kind of went back to ground zero and totally changed everything about what he was doing technically."

The transition took some time, as Favors had to learn a new technique for throwing at the collegiate level. When Favors was in high school, he used the glide technique, which is commonly used in shot put.

However, after coming to South Carolina he switched to a rotational style. This is where Favors had to focus on his pace when throwing instead of solely on strength.

Strength is the foundation for shot putting, but Sergent said the sport also involves the "touch that you have to have in golf or the feel that a dancer has to have," because it requires a high level of finesse and technique.

During his time at South Carolina, Favors has learned patience, as he did not compete until 2017 where he earned three podium finishes and finished fifth at the SEC Championship.

Last season Favors finished with 18.73m (61-5 1/2), but Sergent said that he knows that Favors' goals are to surpass that record.

“He wants to contend to be one of the best guys in the SEC and move to the NCAA Championships and I think often times the hardest thing is getting there," said Sergent. "Once you are there you’re one of the few athletes that do make it there.”

Favors acknowledged that the transition was difficult and it took him a while to adjust. However, after four years, he is getting more comfortable.

“He had to go through a learning process, and each year he's gotten a little bit better,” Sergent said. “This year I kind of feel like he's at a point to where he’s really figured out what he needs to do.”

With a new role as team captain, Favors has learned how to embrace leadership after former teammate Josh Awotunde paved the way. The two athletes pushed each other at South Carolina.

“I think the two of them were great training partners and like brothers in many ways and did a lot together," said Sergent. "I kind of feel like ‘okay, well Josh has graduated and moved on,' and now ... it's Eric’s turn to be the guy.”

In addition to Awotunde, fourth-year Gamecock shot putter Ben Bonhurst has been dealing with injuries and recovering to get back to competing. As a result, Favors has stepped into the role and has developed several goals for his year.

"Just compete and be the best I can be every day and try to get the most out of every competition, just grow as a person,” Favors said.

Along with improvements in body control and understanding, Sergent believes that Favors is still developing as an athlete and has many opportunities to succeed.

Favors messages Sergent every day, drawing strength from his coach and his experience throwing in the Olympics. Sergent credits Favors on improving since Thanksgiving in practice as he has gone to another level.

Favors set a new high mark for himself at the at the Sander Invitational with 63 feet, 7 inches and broke an Irish national indoor record.

Sergent said that he and Favors feel like another big breakthrough is just around the corner. With his new personal-best beating his previous record by more than two feet, Favors is on the path that will help secure his mission.

During his journey at South Carolina, Favors has taken another opportunity to compete internationally in the shot put. Because he has an Irish grandmother, Favors was allowed to continue his dream and throw for Ireland.

Favors had never been to Ireland before until last summer, and he soon became familiar with the streets and the way of life as he represented his family's heritage at the Irish Senior Championship. He finished second in Dublin with a mark of 16.45m in shot put.

Although Favors wears the garnet and black at South Carolina, Sergent said that wearing the Irish colors white, green and orange are a “really special opportunity.”

Favors will look to grow as a Gamecock and complete his end goal: Competing in the 2020 Tokyo Olympics. However, Favors knows that this will not come easy for him. He has a lot of steps to take before he can achieve that goal.

“Just opportunity of throwing internationally and getting my foot in those type of waters would be an awesome experience," Favors said. "That's why I'm definitely trying to take advantage of what I have here, and see how far it takes me.”

Working continuously day in and day out to get stronger is Favors' game plan to reach the highest level of competition. He will use his transition from gliding the ball to rotating as a backbone to perfect his pace.

“I really just stepped into competing internationally, which was a great blessing. I took advantage of something I could do, so I'm looking forward to doing it this summer and upcoming years," said Favors. "Really motivates me to keep working harder and keep on going.”