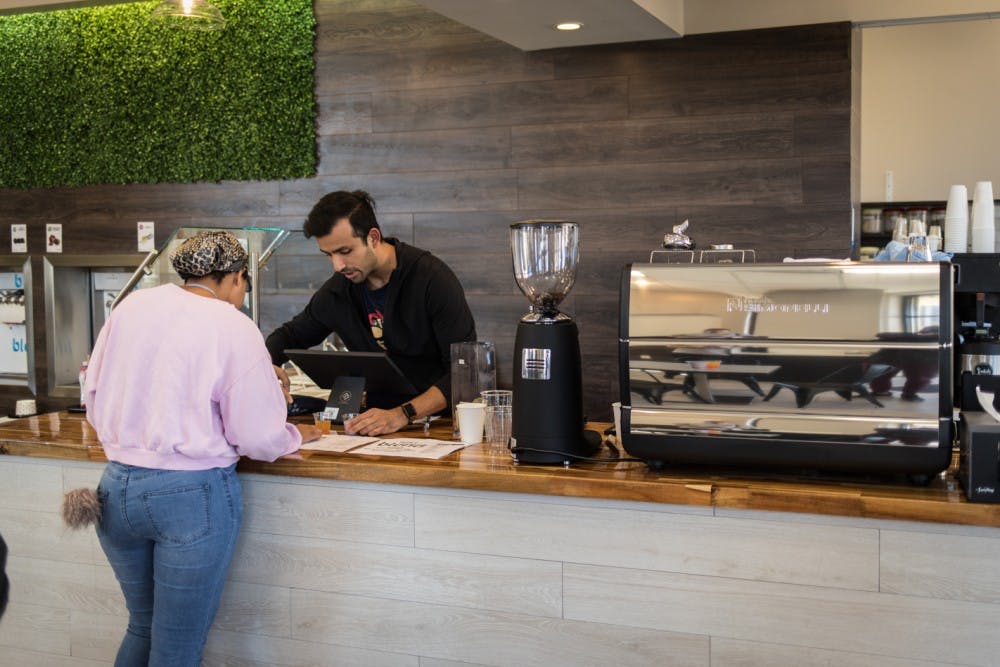 The corner of Blossom and Main was abuzz this week with the soft reopening of a locally owned and operated favorite: Yoghut.

After closing for renovation, the frozen yogurt and smoothie joint reopened on Jan. 16 as The Corner Blend. In addition to the new name, the business has exchanged the vibrant oranges and greens that previously characterized Yoghut in favor of a more refined aesthetic.

Third-year anthropology student Kieran Kirk, who worked at Yoghut the spring semester of her freshman year, sees the updated look as an improvement, commenting on the effect the “earthy” colors have on the atmosphere.

“I think it looks cooler,” Kirk said. “I think [the owner] definitely tries to make it more like a hangout spot.”

Third-year exercise science student Bia Mattos picked up on a hipster element, comparing it to a gelato shop she once visited in Italy. Mattos previously lived in the honors residence hall directly across the street from the business, frequenting Yoghut during her freshman year.

Shafen Khan, The Corner Blend’s owner and operator, who graduated from USC in 2008 with a degree in hotel, restaurant and tourism management, credits the changes to a number of variables, such as a need for clarity.

“People saw Yoghut as frozen yogurt,” Khan said. “It sounds like yogurt, so we decided to rebrand, change the name, and now it’s called Corner Blend.”

Khan hopes the name change will eliminate misconceptions that the location exclusively sells frozen yogurt, a misconception he believes has plagued Yoghut for some time. “The Corner Blend” leaves greater room for interpretation, thus representing the full extent of the menu, which includes açai bowls, smoothies and coffee among other items.

As for menu changes, The Corner Blend is launching new coffee products in partnership with Indah coffee, a locally roasted company. In addition, many of the former açai bowl favorites have been removed from the menu in favor of an extensive create-your-own açai bowl feature.

“I miss some of the old bowls that they had because it was just really easy,” Mattos said. “Now I have to make my own Nutella bowl, but it’s still good. If I want to change it up, it’s nice.”

Khan said the rebranding was also in response to changing consumer habits.

In 2010 it was just frozen yogurt. Then came smoothies. There was coffee for some time, but it was discontinued.

"But in around 2015 we started seeing an increase in sales of our açai bowls," Khan said, "so I decided to go double down on that, and we increased the menu items, we changed the presentation of it, and slowly the business has shifted from frozen yogurt.”

“It’s always hard to get fresh fruit and vegetable kind of things on campus because usually they’re cooked,” Kirk said. “But I think USC is offering more of that recently than they have before.”

Indeed, the shift toward healthier options both on and off campus was a third significant factor in Yoghut’s roughly $40,000 transformation into The Corner Blend. Expanding the menu became a necessity.

At one point, Yoghut found itself competing against 14 other frozen yogurt stores around Columbia, five of which were in close proximity to Yoghut. Khan said Yoghut’s five main competitors have all closed their doors.

“Like the other places that did shut down, had I not evolved or changed my menu items, I would have probably been gone as well,” Khan said.

Khan plans to continue evolving the Yoghut brand as it settles into its new life as The Corner Blend, looking at expanding their catering options and, perhaps one day, branching out to other locations.