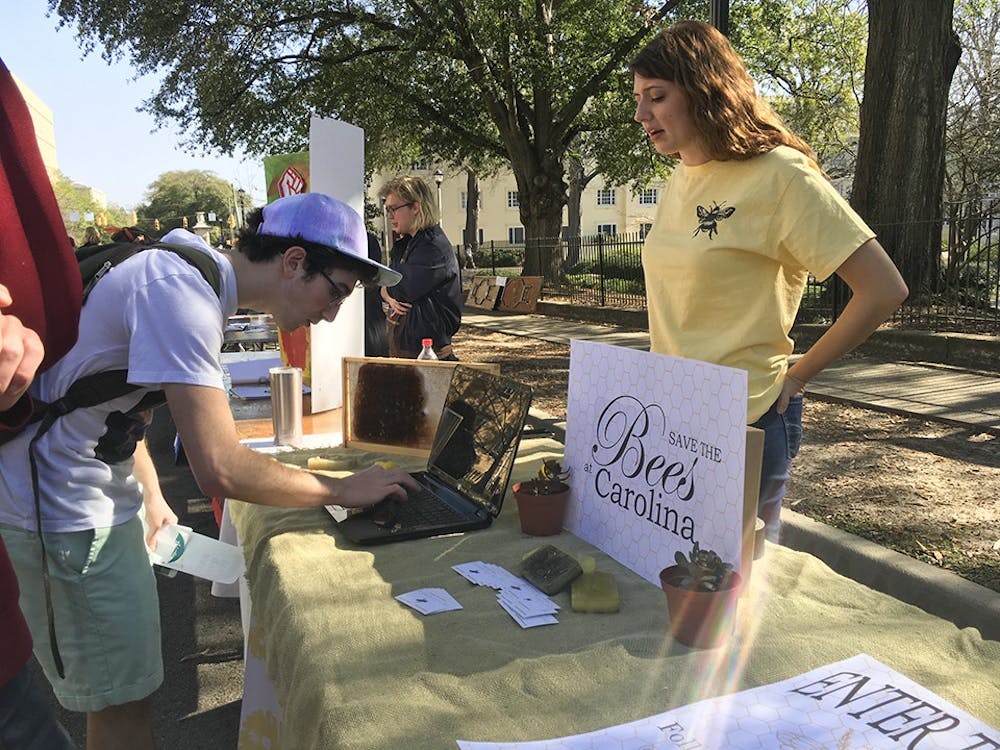 Of the hundreds of clubs and organizations on USC’s campus, only one advocates for those tiny creatures who pollinate much of our food. The Beekeeping Club, with its diverse, skilled members, has become the foremost advocate for bees on campus and in the community.

Mia Cushing, a second-year global supply chain operations management and human resources management student, is currently serving as the club’s new community development coordinator. She joined the club last year and said she hopes to one day own her own beehive.

“I realized that the population of bees are going down, so the importance of having bees is really important," Cushing said. "Many of the foods you eat everyday like apples, peaches — those are all pollinated by bees."

Audrey Jones, the business manager for Green Quad, was approached by Maddison Mizzell, the club's founder and second-year environmental science student, near the beginning of February to serve as a new adviser for the club. Jones explained her thoughts on why the club is relevant in light of the current situation of bees.

“No one’s ever come together with this particular focus in mind, which is bees," Jones said. "Twenty years ago, we didn’t have the colony collapse disorder that we’re hearing about across the nation and other parts of the world where bee colonies are under a threat.”

Colony collapse disorder is when many worker bees leave behind their colony according to the United States Environmental Protection Agency. Its website says that without worker bees, hives cannot sustain themselves and eventually die.

Some of the main ways the Beekeeping Club plans to advocate for bees this semester include establishing two beehives at an off-campus location and getting members certified in beekeeping through the South Carolina Beekeeping Association. Mizzell said the process for getting bees will be difficult, but she is excited to reach that goal.

“We’re going to have to set that lot up, build our boxes, secure our bees, but then with that too, we want to educate our members," Mizzell said. "Teach them the biology, the anatomy, just social structure of the bees, but also what it takes to keep them — you know, what they need as far as food, how often do we need to work with them."

Jones shared her own aspirations for the club’s impact, including expanding the club’s focus to providing a healthy environment where a wider group of pollinators could thrive. One initiative she said she advocates for is creating a pollinator corridor along the Rocky Branch Creek, an urban stream that runs through campus.

“It would be quite easy to just get some new students interested and do some planting parties to plant native pollinator plants along the corridor through campus, giving the butterflies, bees and often-forgotten moths a chance to have a healthy, happy life and also pollinate our plants for food,” Jones said.

Another way that the club said it hopes to accomplish its goals is through social advocacy. Mizzell said she believes giving bees a voice is important.

“That's another side of the organization in the sense that using our following on social media, using our resources with the university, to really reach out to as many people as we can and tell them, ‘Hey, this is happening, this is what we can do about it and here’s how you can help us,’" Mizzell said.

Other goals of the Beekeeping Club for the spring semester include building good foundations and getting members comfortable with each other. Mizzell said developing this community among the club’s members and working with a variety of people to accomplish various goals has humbled her.

Because the club is relatively new on campus, maintaining relationships that the club has built with local organizations such as the South Carolina Beekeepers Association, the Mid-State Beekeepers Association and others is also on the agenda. Mizzell highly values supporting and being confident in what other people have to offer in regards to developing these connections.

“When somebody came to me for the first time with, ‘Hey, maybe we should go to the Mid-State meeting’ and I was like, ‘I mean, okay’ and the Mid-State Beekeepers Association has been one of our best connections so far,” Mizzell said.

Cushing said she hopes to bring the members of the club closer and continue to develop the Beekeeping Club’s relationship with the local community through opportunities like the open movie screening of "Queen of the Sun" on Feb. 18.

“It will help inspire the beekeepers, as well as show you how bees are going through the world and working with different things, and the struggles of beekeepers and how it’s hard to keep bees, but it’s still going to have good, rewarding solutions and it's just showing an overall idea of what we’re getting into,” Cushing said.

Mizzell said she feels that reminding people of their impact on the reduction of the population of bees is a big step towards giving bees a voice.

“Telling people that and reminding them like, ‘Hey, it’s not just this natural thing — it’s our fault’ is a really big deal because it changes the story, it changes how we react to it.”

Bringing together the diverse members and goals that the Beekeeping Club has is something that Mizzell and Cushing said they both look forward to. Mizzell said that she hopes her experiences with the club, as well as the club itself, will continue to have a positive impact on the environment.

“I hope it continues because that’s ultimately what I want," Mizzell said. "To just learn everything I need to know as far as what bees are, what they do, but also what can I do to make that impact that I want to make.”