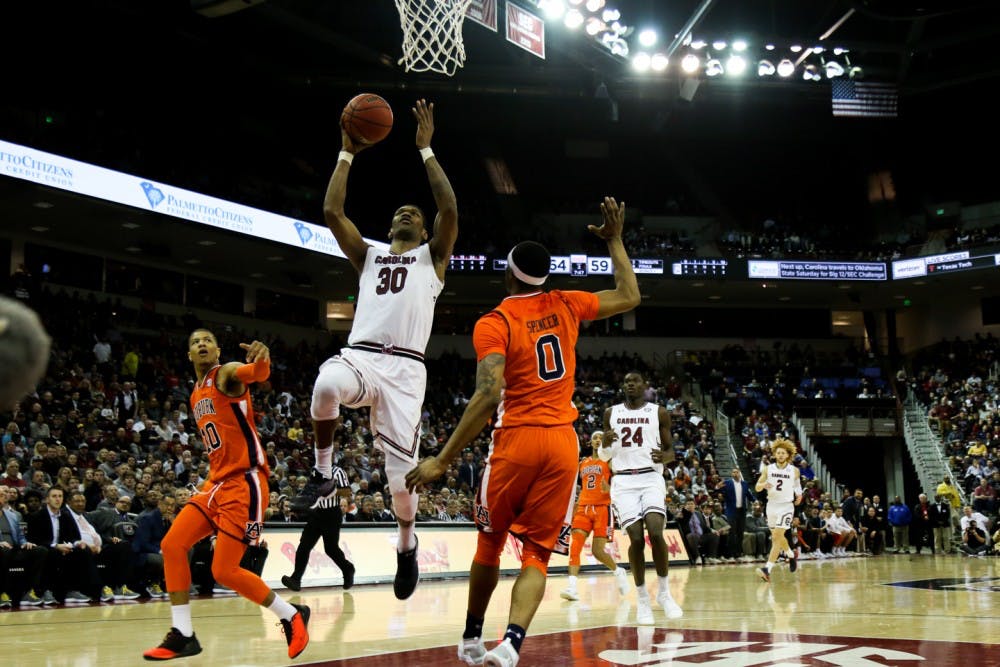 Chris Silva gets confidence back through teammates and Frank Martin

As the Gamecocks' season has progressed, South Carolina has found strength in senior forward Chris Silva.

Even with the team's inconsistency and young talent, Silva's leadership and dominance on the offensive side of the ball has helped to carry his drive for his final season.

"Yeah, I got a couple goals this season, and I mean, it's only applying to me when I step on the court," Silva said.

Improving in block shots is just one of Silva's goals.

Despite the loss to No. 1 Tennessee, Silva scored 22 points in the first half alone against the Volunteers.

Head coach Frank Martin said that Silva is sometimes in the fight by himself with no help, as he saw against Tennessee. As a result, he wears down at times. Freshman forward A.J. Lawson realizes the pull and momentum that Silva carries each game.

"Chris always brings good energy," Lawson said. "He's always talking to us and encouraging us like a good leader. Just gotta, as a team, help him out when he's having a great game like that, giving him more touches second half."

Lawson scored nine points against Tennessee, and he said he needs to stay more consistent and pick it up each game by reading his defense better.

Even with the support of teammates, Silva relies heavily on Martin's guidance and advice. Whether it be from a bad day or just wanting to talk, Silva can usually find himself walking into Martin's office to talk about anything from what's wrong to basketball and watching film.

"It's always special every time I go to him," Silva said to Gamecocks Online. "I remember last year, back at the end, towards the end of the league plays, I was struggling and I was going back to him to talk to him ... and he always gave me great advice. He always tried to pick me up when I try to adapt myself."

Before Silva established a true relationship with Martin, as a freshman, he knew what Martin was doing at South Carolina and that is what drew him in from the start.

"Obviously, it was somebody new in my life, so I hadn't spent time with him and I haven't talked to him. So, coming to him at first, I was a kind of dude that liked to keep stuff to myself, so coming to him ... was hard," Silva said. "But as the years went on, we learned everything about, not everything but most of the stuff about each other and got comfortable around each other."

With the confidence that Martin brings back into Silva, he has became the first Gamecock player to make 500 free throws and 700 rebounds in South Carolina history this season.

Silva knows that he can trust the coaches to call the Gamecocks out when they are slacking in practice with energy and performance.

After playing with junior forward Maik Kotsar for three years, Silva knows how they have an effect on each other. If either one is emotional, then it is a domino effect. But Silva said that they try to talk to each other to make themselves better.

When Kotsar steps up with his aggression, it strengthens Silva's ability on the court.

"It makes it a lot easier," Silva said. "I don't have to fight two people on a post, but he's given me freedom to go rebound," Silva said.

The teammates and coaches have held Silva back at times, but in the end pushed him to the player he is now as a senior.

Martin acknowledged how early on this season, Silva struggled to find his spirit on the court because Martin pressured Silva, but he needed to understand what he needed as a player.

"That's where I messed up early in the year, 'cause I saw his growth early offensively in the offseason," Martin said. "I saw his growth in our preseason practices offensively, but he was playing with a bunch of brand new guards who didn't understand how I wanted our team to play. And because we weren't playing the right way, I put too much pressure on Chris to do more, and that's where it wasn't fair to him."

Martin said that if South Carolina can keep Silva on the floor, then he will continue to have good games by connecting everything that was practiced in preseason with his ball screen defense and his enthusiasm.