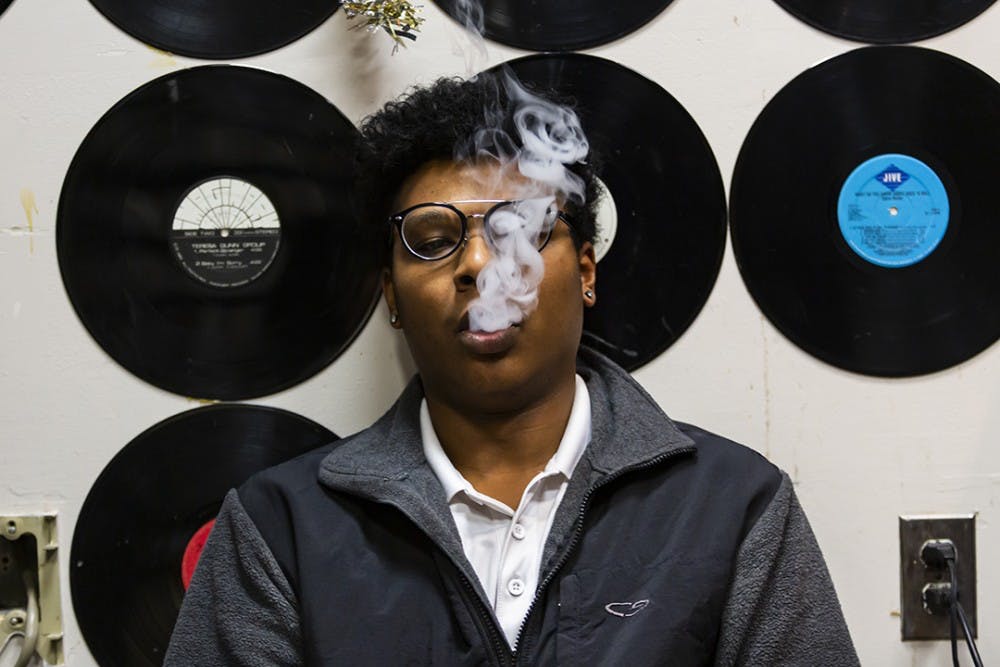 'They're addicted': JUULing for clout at USC

By Taylor Washington, and Genna Contino

You're in class taking notes when you notice your classmate in front of you has something sticking out of their laptop. It's rectangular and has a blinking light. You think to yourself, who still uses flash drives in 2019?

Your classmate was charging their JUUL.

The appeal of the JUUL

You've seen it all: tiny smoke clouds that magically rise from the seats below you in large lectures, the person in front of you on Greene Street frantically inhaling and puffing while rushing to class, and the empty, trampled-on JUULpods that litter the campus and Five Points sidewalks.

USC boasts a tobacco-free campus. If a student is caught with tobacco products, including JUULs, on campus, there are typically consequences: a meeting with the conduct office and a mandatory tobacco treatment program.

Regardless, students are frequently seen smoking JUULs outdoors on campus, in class and in residence halls.

JUULs are small and easy to conceal, which is one reason smoking them is so prevalent despite the risks, according to Jackie Knight Wilt, assistant director of Healthy Carolina Initiatives and Student Health Services.

"They're addicted," Knight Wilt said. "So nicotine ... its addiction is pretty comparable to cocaine."

But the addiction, which comes for free with JUUL's $49.99 Starter Kit, is often disregarded by consumers because of the starter kit's features. For example, JUULs made by the company of the same name have a "party mode" setting where they flash in different colored lights, and they come with four flavors of JUULpods: Virginia Tobacco, Mint, Creme and Mango.

The flavors JUUL offers aren't users' only options. Other companies have created JUUL-compatible pods. The BP on Rosewood Drive offers a variety of off-brand flavor pods for JUUL consumers, including sour apple and White Russian.

The JUULpods each contain 5 percent nicotine strength. Knight Wilt said that's about two times more than other e-cigarettes and is equivalent to a pack of regular cigarettes, causing the addiction risk to be higher in JUULs.

One thing that worries Knight Wilt about JUULpods is the empty ones that are found all over campus, discarded on the ground by students to fill their device with the next flavored JUULpod.

"So you also start to wonder, too, about the connection of particular risk behaviors connected with folks who introduce these kind of substances into their body. Like, is there a lack of care?" Knight Wilt said. "I mean you're literally just littering and not even thinking about it and [the] impact that has on the environment as well as the others around you."

However, eliquid-depot.com offers refillable pods for JUUL users who care for the environment.

Students opinions on JUULing from Arts and Culture on Vimeo.

Due to lack of government regulation, more marketing materials are allowed and photo IDs aren't necessary, according to Knight Wilt. Because of this, middle to early high school-aged kids are able to give into the JUULing peer pressure, lie about their age on juul.com and order a JUUL of their own.

But the most relevant JUUL users on USC's campus are the students. According to AlcoholEdu, in Fall 2018, 22 percent of incoming students used e-cigarettes. This is a jump from 15 percent in 2017 and 5 percent in 2016.

JUUL says on its website it developed the product as an "alternative to cigarettes" with a mission to eliminate cigarettes.

"I have the JUUL for when I'm at home. I don't really feel like a cigarette. I smoke cigs when I drink. That's pretty much it," Etzrodt said.

"It's like cigs but it doesn't smell," he said. "We're getting addicted to the next cigarettes."

What are the potential risks?

The brain is not finished developing until a person is around 25 years old, Knight Wilt said. As a result, people who start JUULing at a younger age are more sensitive to nicotine and more susceptible to addiction, she said.

There’s also a potential for nicotine poisoning, especially for first-time users. Knight Wilt explained that many first-time users aren’t aware of how many "hits" they can handle, and can end up taking too many.

Because JUULing is a relatively new phenomenon, Knight Wilt said, most people don't know its long-term effects yet.

“Unfortunately, just like cigarettes and other tobacco products, it's gonna take decades to actually understand what are the long-term harmful effects of these," she said, "and that’s what I think a lot of students don't understand, is it's the cool thing to do now."

Knight Wilt said that two of the biggest misconceptions students have about JUULing is that it’s a healthier alternative to smoking cigarettes, and smoking e-cigarettes could help wean them from their nicotine addiction.

"You're just addicted to another thing," Knight Wilt said.

The Center for Health and Well-Being used to sell nicotine gum and other nicotine cessation products, but stopped because of low sales. However, the center does offer free cessation programs for those who are struggling with addiction.

The future of JUUL

Jim Thrasher is a professor in the Department of Health Promotion, Education and Behavior in the Arnold School of Public Health and has been researching the effects of tobacco policies for almost 20 years.

Like Knight Wilt, Thrasher said it will take decades to understand the long-term effects of JUULing.

While he said recent research has concluded e-cigarettes are a healthier alternative to regular cigarettes, "it is not yet known whether JUULs are more or less harmful than other kinds of e-cigarettes," said Thrasher who was interviewed by email.

"The FDA has the very difficult job trying to figure out the best way to regulate JUUL, recognizing its potential to move smokers to less harmful products than cigarettes while also trying to keep youth from starting to use them. It is taking measures to consolidate the e-cigarette market so that it will be easier to regulate going forward," Thrasher said.

As a result, JUUL decided to remove once-popular flavors such as mango and creme from gas stations and convenience stores. These flavors are now only sold online or in vape shops.

Altria, the parent company of Phillip Morris International, which makes Marlboro cigarettes, took a 35 percent stake in JUUL in December.

"With this purchase, Altria pledged to give JUUL even greater prominence in the places where Marlboro is sold. This would likely expose more youth to positive advertising messages about JUUL," Thrasher said. "On the other hand, these promotions may also encourage more adult smokers to try and switch completely to JUUL, which seems much less harmful than cigarettes."

South Carolina lawmakers are currently debating a new tax on tobacco products as a preventative measure to stop teens from using them. If passed, lawmakers say revenue from the tax will be used to increase teacher salaries.

Thrasher said he supports the proposed tobacco tax bill, and said it could be one of the lowest tobacco taxes in the country.

"Taxes are the most effective way to reduce smoking among adults and to keep kids from starting to smoke," Thrasher said.

"Since most university students are over 18, I expect that we will start seeing more JUUL use on campuses as Altria/Philip Morris helps to distribute and promote it," Thrasher said.