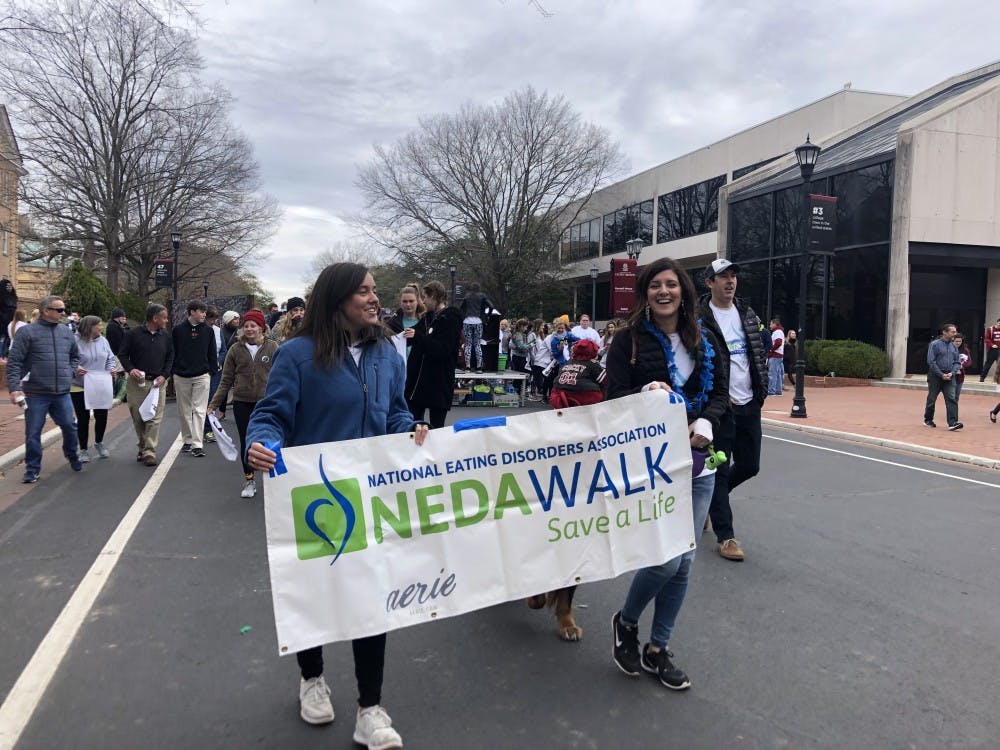 The annual National Eating Disorder Association (NEDA) walk on Saturday brought more than 240 students and members of the community together to raise awareness for eating disorders.

“I think today is really important,” said Student Body Vice President Mills Hayes. “This is a chance for our entire community — the Columbia community — to really highlight and make eating disorders more aware in our community and to talk about it.”

Hayes shared her story of recovery from bulimia at the NEDA walk and hopes to start a conversation both on and off campus.

“I think talking about it openly and talking about how sick and tired we are of trying to live up to this ideal beauty standard that changes every freaking century,” Hayes said. “I think it’s really cool for everyone to come together, not just USC students.”

During Carolina BeYOUtiful Week, Hayes created a sorority challenge that allowed sororities to earn points towards the prize of a free private barre class. The sororities competed to attend events and raise money for NEDA.

Haley Bain, second-year advertising student, attended as the Panhellenic delegate of Alpha Xi Delta and wanted to support the cause.

“I think it’s important to support girls who are going through this and tell them that they aren’t alone because it happens to a lot of people,” Bain said.

The NEDA walk gave participants an outlet to share their stories of struggle and victory in an effort to destigmatize eating disorders.

McKayla O’Sullivan was hospitalized after struggling with an eating disorder and other mental health issues going into high school. Now, the second-year nursing student has made a full recovery and wants to support others going through the same struggles.

Representatives from organizations such as Veritas Collaborative, Aloha Center, Eating Recovery Center of the Carolinas, Project Heal and Student Health Services educated participants throughout the day.

Amy Helms from Project Heal hopes to provide better access to recovery for those suffering with eating disorders after she experienced the struggle first hand.

“I’m recovered from an eating disorder, and I firsthand saw how hard it is for insurance to get coverage and the many barriers you run into,” Helms said. “It’s important for me to be able to give back and bring the same to other people that need the help and support.”

Helms was not the only participant inspired by her overcoming her eating disorder. Kelly Toney from the Aloha Center wants to where her daughter will never struggle with body image like she did.

“I know that if we create a world that doesn’t have diet culture in it and has enough money to research eating disorders, [my daughter's] a lot less likely to get that,” Toney said.

Laura Grace Culberson, Amy Helms' daughter, was one of the youngest participants. However, the 9-year-old was eager to share her support NEDA.

“I think it’s important because if you were in the situation of an eating disorder then what would you want?” Culberson said. “You would want people to help you, right? Well, that’s what this whole walk does.”