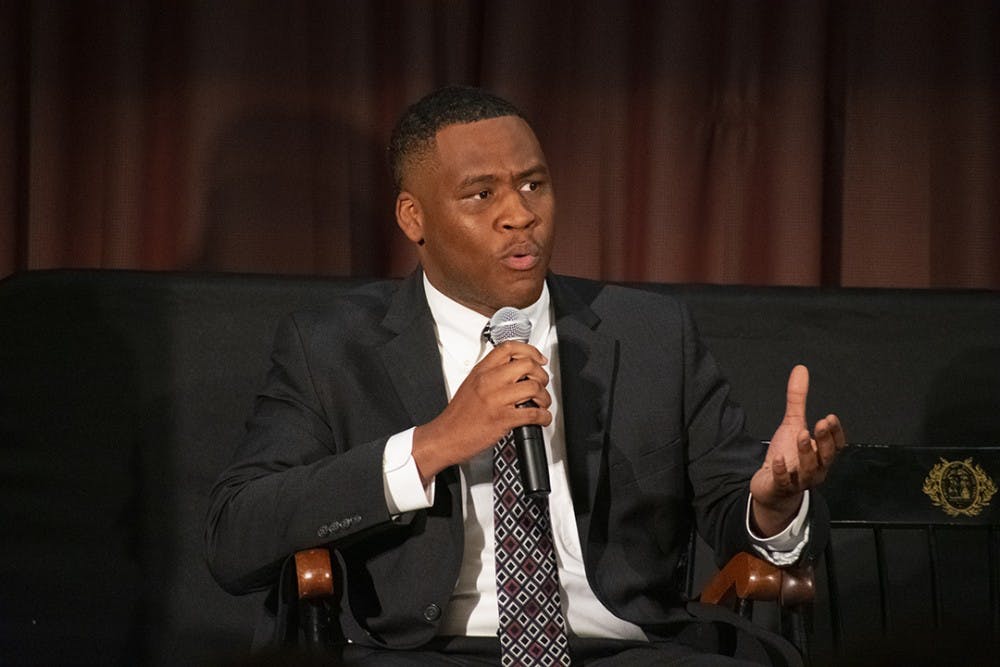 The Forward campaign asked a member of the campaign staff and clerk of the student senate to resign after there was insufficient evidence to back up campaign violations against Nick Hooks, speaker of the senate candidate.

"I would not lie, and I would never support any sort of fraudulent violation," Latham said. "I think it's pretty offensive, this idea that I would be in cahoots about that."

Latham later told The Daily Gamecock he had not told the whole truth because he felt that mistakes made within the campaign should be kept internal.

"I do not feel like I was as honest as I would have liked to [have] been," Latham said.

Following this statement, Latham said he did not like how the violation and hearing had proceeded.

"I didn't like the idea of someone filing something and not having evidence ready,” Latham said. “It just didn’t look good to me.”

Hooks’ campaign violation hearing was Wednesday night. Due to the insufficient evidence, Patrick Ellis, presidential candidate on the Forward ticket, and Latham both asked Jacob Smith to resign from the campaign staff and his position as senate clerk.

Smith declined to comment on the violations or the events that followed.

“This is something that occurs every election season,” Kathryn Stoudemire, the elections commissioner said. “It’s a super competitive year, so if candidates think that someone else is breaking the rules they have no qualms with filing a violation.”

Smith filed 10 violations against Hooks in one day. All 10 violations alleged that Hooks reached out to individuals whom he didn’t know previously and asked for votes.

Four campaign violation points were tacked onto Hooks’ campaign — one for each violation — while six others were thrown out for due to lack of sufficient evidence.

Latham spoke at Hooks’ violation hearing on Wednesday. He spoke both on behalf of his ticket and on behalf of Smith. Latham said he had not seen the violations filed until the hearing.

Both Ellis and Latham have said that they don’t file violations just for the sake of filing them, and that they want to keep the race clean.

“My goal in going [to the hearing] was to clarify to the commission that Nick Hooks has constantly and continues to violate the rules,” Latham said.

Hooks' violations were numbered one through 20. Violations 11 through 14 were successfully filed because the elections commission found sufficient evidence, resulting in points against Hooks’ campaign. Screenshots from mobile phones showed that Hooks directly messaged people he didn’t know before candidates were allowed to start campaigning.

But Hooks has disputed violations 15 through 20 because they did not include the same evidence as violations 11 through 14.

The screenshots included with violations 15 through 20 had no names attached to the direct messages, making it unclear to whom they were actually sent.

Violation 19, for example, includes an iPhone screenshot of an Instagram direct message from a Hooks campaign staffer asking the receiver if Hooks can count on his or her vote. It’s followed by another screenshot of a text to Smith, with no prior conversation history, from a person named “Brianna” asking why they’re receiving messages.

“Who the hell is Nick Hooks?” the text to Smith read. “I don’t care what he is running for why is he messaging me?”

“We couldn’t connect the people to the messages that were sent, and there wasn’t really any proof that they had received the messages,” Stoudemire said Friday. “And so we decided that with a lack of evidence we didn’t feel comfortable assigning points or even saying that a violation occurred.”

When asked to present evidence of direct messages and texts, Smith was unable to find the original messages or screenshots of them.

“[Smith] basically spends a lot of time looking for it and couldn’t find it, which raised concerns to me because I don’t believe evidence gets lost.” Latham said.

Hooks said he believes members of the Forward campaign — consisting of Ellis, Latham, vice presidential candidate Kamryn Phlegar and treasurer candidate Adger Drummond — have falsified evidence against him. After 10 violations, the elections commission can move to disqualify a candidate.

“They knew the number of points we had, at the moment we had five,” Hooks said. “I believe that the campaign knew that we would receive those points. And what they were trying to do was get me over the edge of the 10 to where I would be kicked out of the race.”

Hooks currently has eight violation points against his campaign, not nine, because he successfully appealed one point. He’ll be running a “careful” campaign, he said, to ensure he remains eligible to run.

Managing editor T. Michael Boddie contributed to the reporting of this article.