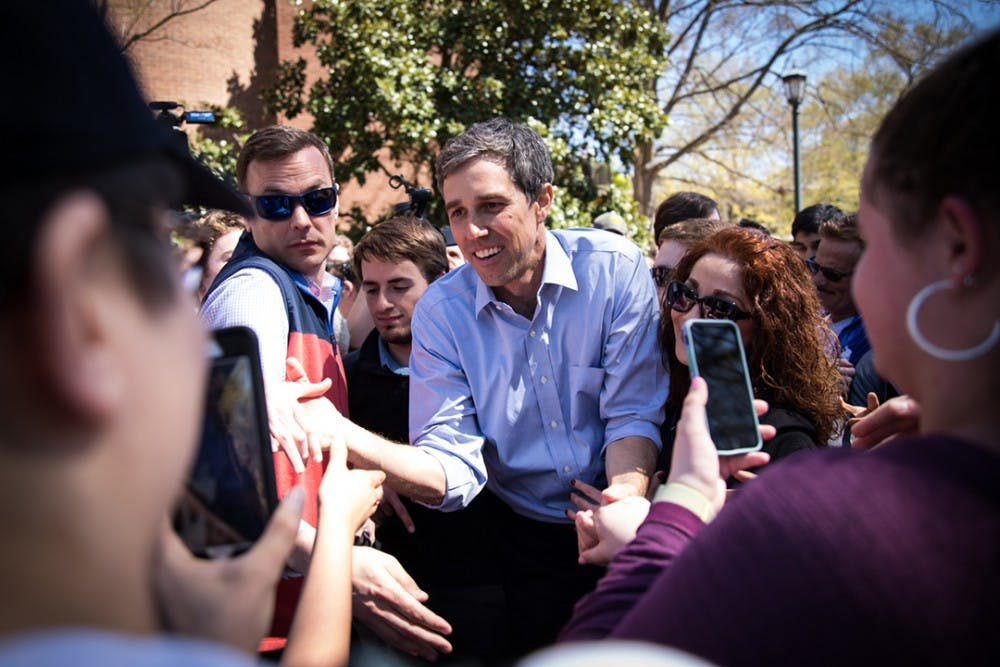 'Glad to be at the original USC': Beto O'Rourke makes campus campaign stop

The College Democrats invited O'Rourke to USC where he addressed students, faculty and alumni at the Russell House patio last Friday.

“There is so much pride in this institution. So many students and alumni of USC reached out to us and asked us to visit. I’ve heard so many great things, and I want to be here and see it for myself,” Beto said.

The El Paso native ran against Ted Cruz for Senate during the 2018 midterm elections. Though he lost the Senate race, O'Rourke received national attention and gained popularity among younger voters. Since he announced his candidacy on March 14, O'Rourke has toured the country, visiting colleges such as Keene State College in New Hampshire and Penn State University. He also visited South Carolina State University later Friday afternoon.

“I want to make sure that this campaign is all about bringing people together,” O'Rourke said.

O'Rourke is the latest of many politicians to visit Columbia but the first presidential candidate to speak at USC this year. Seth Moulton, Amy Klobuchar and Kamala Harris have all visited Columbia this year, in addition to Cory Booker and Pete Buttigieg, who visited this past Saturday.

South Carolina is breaking records with its predominantly African-American Democratic voting population, according to NPR. This means many Democratic candidates will campaign in the state to attract the minority vote and attempt to reach younger voters at college campuses such as USC.

“He possibly has my vote," Arianna Sayles, a third-year psychology student, said. “I think the college vote is where it’s at.”

O'Rourke addressed many topics, including the Mexican-American border, overpopulation in prisons and healthcare reform. He also focused on the history of inequality and discrimination in his home state of Texas and South Carolina.

O'Rourke emphasized his goals to create more inclusion and equality in America.

Mckenzie Rice, a second-year public health major, said he enjoyed hearing O'Rourke's opinions but hoped he would be more concrete.

“I like how he addresses the issue. I do wish he would talk more about how he is going to do everything," Rice said. “I actually consider him the candidate I’ll be trying to vote for."

O'Rourke made an effort to discuss his thoughts on the increasing cost of college along with the cumulative sum of debt American college student possess to the audience that consisted largely of college students.

“Let’s face the fact that we have 1.5 trillion in outstanding student loan debt,” O'Rourke said.

O'Rourke expressed his disapproval of the Trump administration’s tactics of dealing with student loan debt.

“[Trump] wants to defund federal subsidized student loans, meaning that you’re going to pay more at higher interest rates for the education that allows you to unleash your potential and live to your full promise,” O'Rourke said.

According to Forbes, Trump's 2020 budget proposal includes a large overhaul of higher education and student loan funding. The administration proposes a 10 percent decrease in funding to the Department of Education from 2019.

One audience member asked O'Rourke to address his history with accepting fossil fuel money despite his policies on environmental protection. The individual wanted to know if O'Rourke would take oil money in the future.

O'Rourke explained he took money from a variety of people in addition to the fossil fuel industry. This was because he refused to accept political action committee donations. He said his campaign was the highest recipient of funds from hairdressers and pharmacists and that donations by advocates of fossil fuels were only a small portion of his funds.

In the back of the crowd a sign saying "¿Por que Beto?” was held up. The student who carried it, Emmanuel Torres, a fourth-year biochemistry and molecular biology student, was hoping to get more definite answers from O'Rourke during the speech. He currently does not think he will vote for Beto in the 2020 election.

Torres said he thinks Beto is "a little too left-leaning."

“He seems to be like a people person, but it’s kind of hard to say with his shady background,” Torres said. “There's a lot of questions still out there.”