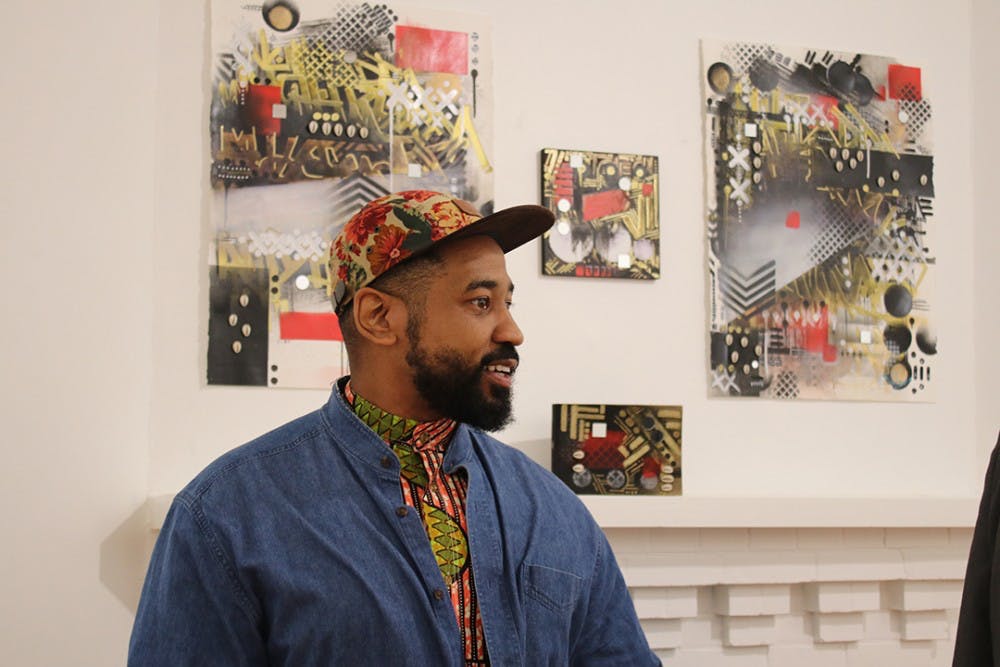 By Iggy Shuler , and Nick Sullivan

Cedric Umoja is an artist on a mission: to preserve black-owned spaces in the face of increasing challenges.

A visual artist and 2019 Indie Grits fellow, Umoja is exploring issues of blackness in connection to land with his exhibition “Spells for the Freeman / Liberation of Land Through Breath,” which opened on March 21 at Indie Grits Labs, a nonprofit that promotes media education and artist-driven projects.

“This body of work speaks towards the commodification of land. It specifically addresses the evaporation of black spaces, namely the slow yet obvious demise of the black community,” Umoja said in the exhibition’s artist statement.

The artist said he was moved by his own experiences with his mother’s side of the family and their property. He observed his maternal grandparents, great uncles and cousins working as a community and took walks with his grandmother through the woods, picking blackberries and drinking from springs. All of that is now gone, Umoja said.

“Just gone. People from my generation probably, and some people who were older, when they were given the opportunity to have control and stewardship over the land, what they did was they sold it or they just let it get into a place where they didn’t pay the taxes on it.” Umoja said.

The artist said his family’s land isn’t the only place he’s observed these kind of changes, but rather a small part of what he believes is a widespread phenomenon.

“There's areas being controlled, purchased, confiscated, however you want to put it and being used in ways that don’t benefit the whole,” said Umoja, whose work confronts this shift through the sculpture, paintings and short film he’s created through his Indie Grits fellowship.

“Within our community, the black community, there are times when we don’t really see the importance of it until we can’t put our hands on it anymore — until it’s not tangible, as it used to be,” said Umoja.

In his work, Umoja attempts to confront these issues with a visual style which may seem abstract at first, but is actually intended as symbolic, he said. By using mirrors and partially visible text, he encourages viewers to engage with the exhibit’s paintings on a deeper level.

“It works sort of as a subliminal means of contacting the subconscious. So, I hope it pushes and pulls people,” said Umoja. “Mirrors tend to work like portals; they tend to push you out, pull you in.”

In addition to the exhibit, Umoja created a film as part of his work with the fellowship. The film, titled “Ten Toes Down,” will screen at this year’s Indie Grits Festival, a four-day event showcasing film, music and art in Columbia. A mixed media short film based in Afrofuturism, “Ten Toes Down,” takes place on Umoja’s family land and features a performance from the artist himself. Some of the text visible in the exhibit’s paintings appear in the film as spoken spells and rituals, lending a sense of continuity to the projects.

“‘Spells for the Freeman,’ ‘Ten Toes Down,’ they’re all short films, they're all cohesive. It’s all really one unit,” said Umoja.

Umoja’s work is part of Indie Grits Labs’ The Rural Project, a 2018-2019 project which will spotlight the narratives and experiences of rural communities of the South in the changing modern world.

The exhibition will be on display at Indie Grits Labs until June 13, and “Ten Toes Down” will screen at the Indie Grits festival next week.