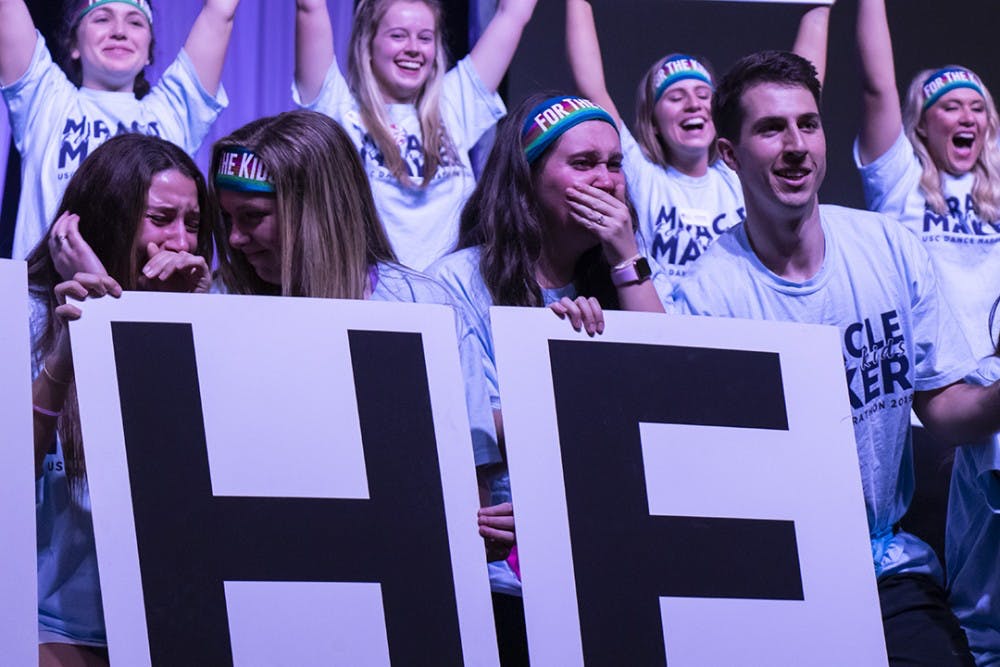 In 2018, Dance Marathon raised $1,025,171 for its 20th anniversary, which exceeded the $1 million goal. This is the second year the organization raised over $1 million.

“I wish we had gotten more, but I am so proud of what this organization does,” Martin said. “Even the fact that we hit a million is still so awesome.”

Students from various organizations around campus united to raise $1,190,000 by the end of Main Event, a 14-hour dance party that raises money for the Child Life program at Prisma Health Children’s Hospital. Dance Marathon's president, Kaity Lynch, reminded all participants at the end of the night how valuable their contributions were to the program regardless of the amount.

“Think about what these 14 hours did for so many families and children throughout the state of South Carolina,” Lynch said. “Take a moment to think about all the incredible things that we have accomplished today.”

Dance Marathon involves students in many leadership positions throughout the year. The newest addition to the organization's leadership hierarchy is Ignite, which involves underclassmen. Max Lapine, a second-year public health student, enjoyed his time fundraising with the Ignite team, which raised $65,000, exceeding its personal goal by $35,000.

“I’ve always done Dance Marathon at my high school ... but this year, this is just on a different scale,” Lapine said. “It’s so much bigger than what I’m used to. So it was just awesome to see how everyone came together and made this event possible.”

Throughout the day, Miracle Families shared their stories of being impacted by the Child Life program and the relationships they built with students at USC. Hearing the stories of children impacted by money raised through Dance Marathon was first-year international business and Spanish student Emily Heeb's favorite part of the night.

“You got to feel on their level why making this donation is such an important thing,” Heeb said.

“It’s the most incredible feeling in the whole world,” Cofer said. “I can’t explain it to somebody who’s not here, but I’ve cried both years I’ve done it, just from sheer amazement of what we’ve done.”