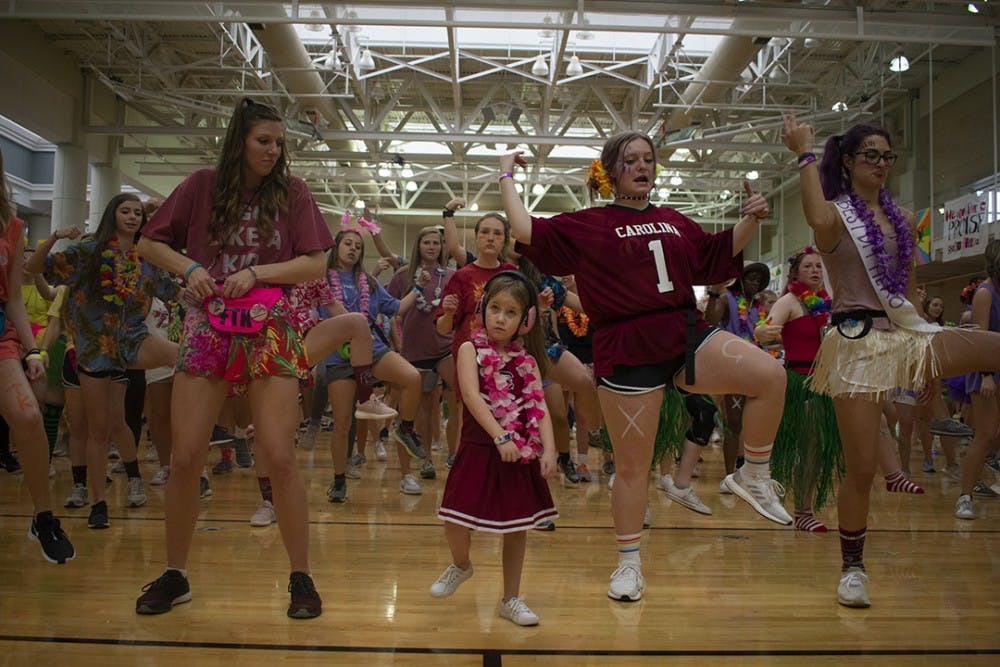 When her daughter Ellington was born, doctors told Crystal Hewitt she would never experience a high quality of life due to a spinal cord condition.

Ellington is known as a Miracle kid. Born with spina bifida, a condition that keeps the spine and spinal cord from forming properly, the Columbia native not only gets to dance, but she has others dancing for her.

Sara Pollin, a third-year retail management student, serves as USCDM’s director of family relations, functioning as the liaison between Miracle families and the Dance Marathon staff.

As the director of family relations, Pollin and her committee are able to interact with the Miracle kids and spend time with their families outside of the hospital.

“A lot of the kids do live locally in Columbia, a lot of them go to school in the Columbia community,” Pollin said. “I have been able to go to their basketball games on Saturdays or their plays on Fridays, and babysitting them. And also, a lot of times, we try to have Miracle families come in and visit.”

Pollin also touched on the importance of the USCDM staff hearing about the Miracle kids directly from their families rather than just reading about them.

“It’s a lot more impactful seeing the families live than just hearing their stories," Pollin said. "I like to try my best to make sure that they’re getting as much face time with the families as possible.”

Grace Chadwick, a fourth-year public health student, serves as the vice president of community relations for Dance Marathon this year. Chadwick also touched on the importance of the USCDM staff being there for the Miracle families during their time in the hospital and after.

“We just kind of make sure that our Miracle families feel loved and special,” Chadwick said. “We show up to birthday parties and special events like dance recitals and sporting events and things like that just to make sure that they feel supported and loved through Dance Marathon.”

Chadwick also says that being a part of USCDM has been her favorite experience during her time as a student at USC.

“I’ve been able to develop relationships with all [the kids], and it’s been just an incredible experience because I’ve been able to watch all the kids grow up and achieve major life events whether it’s at school, with their families, or even in their treatment at the hospital,” Chadwick said.

Hewitt says that though they live locally and interact with the Dance Marathon team here, the network and care for the Miracle children extend far beyond Columbia.

“When we went out to Philadelphia for special treatment for Ellington, they called the people in Philadelphia — you know, the Dance Marathon there,” Hewitt said, “and it was just neat how they followed her along with her journey, send her cards when she is sick or has to be in the hospital for anything.”

Hewitt also says that the attention the Miracle children receive is about more than the money raised for treatment.

“They really make her feel special. It’s not just a fundraiser and you give the money and you’re done. It is like a relationship and care behind it," Hewitt said.

When Miracle child Brayden Sox was 10 years old, he was diagnosed with leukemia. Now at 13 years old, Brayden will finish treatment this November. Brayden’s mother, Jamie Sox, says the Dance Marathon staff’s presence helped Brayden get through his time in the hospital.

“We are very fortunate to have the children’s hospital in our backyard. You know, the things they do for these kids — it’s just amazing," Sox said. "When you spend two and three weeks in the hospital and you’re a preteen, you know well, there’s nothing to do. Well, they make things for them to do,” Sox said.

Sox also expressed her gratitude for the Dance Marathon staff.

“I just am so thankful that so many young people go through a lot to raise money for things that maybe not have a direct impact on them but have a huge impact on a lot of local families.”

Courtney Tipping and her daughter Zoe, another Miracle child, have been coming to Dance Marathon for the past four years. Being a part of Dance Marathon and the Miracle Network has given the Tipping family an opportunity to go to fun events held by the staff leading up to the day-long, nonstop dancing event.

“A lot of the staff actually just comes to be a part of our family, so they’ll come over and play with the kids in the backyard or we’ll eat dinner together, or they’ll come to games — the girls play basketball this year," Tipping said. "They were in a play, and they come to that."

Tipping reiterated the impact that the Dance Marathon crew has had on her family as a support system.

“It’s a really sweet thing 'cause we don’t have family in Columbia, so really Dance Marathon is like our family,” Tipping said.