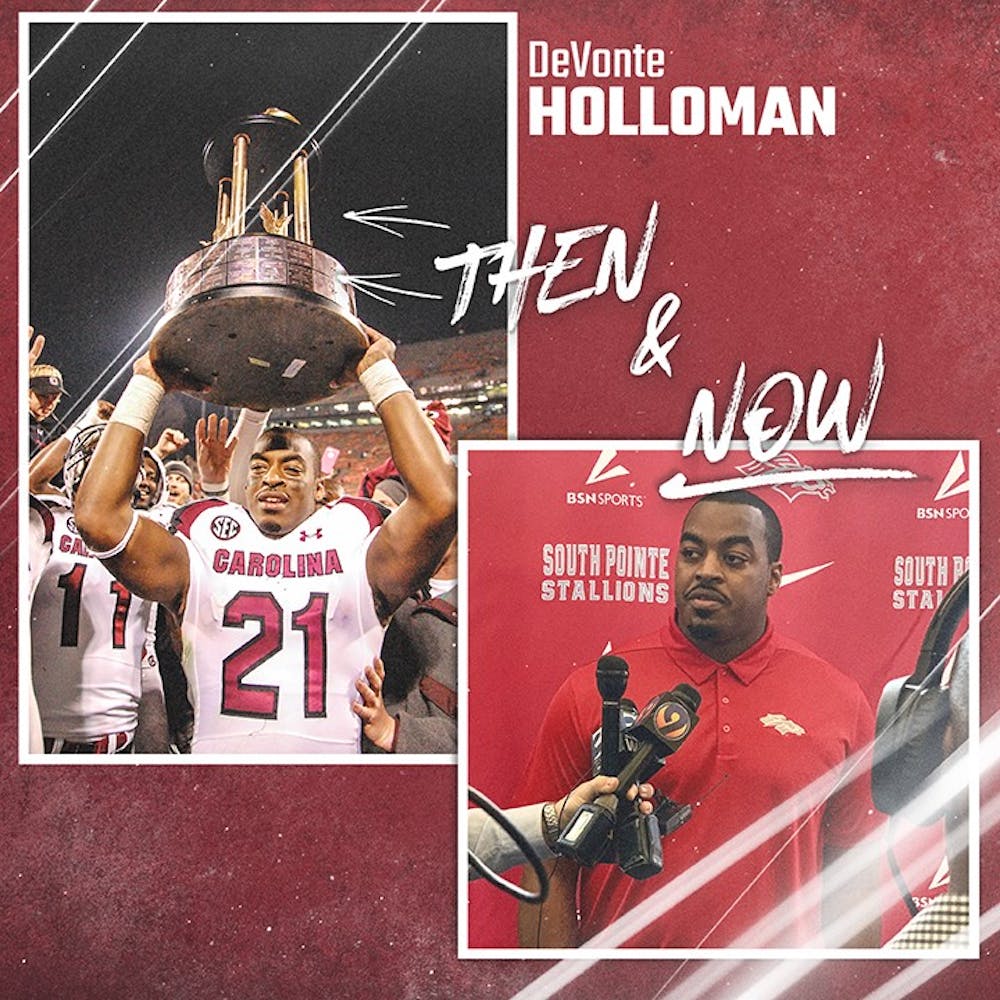 Many football players leave the sport completely after they finish playing. But former South Carolina linebacker DeVonte Holloman is staying involved with football by coaching at his high school, where his football career began.

Holloman was named the head football coach of South Pointe High School on Feb. 4, 2019. The South Pointe football program gave Holloman an opportunity to transfer early to a collegiate level and pursue his athletic career.

After transferring from Independence High School to South Pointe High School for his senior year, Holloman started to make a name for himself.

In 2008, Holloman helped lead the South Pointe team to a 15-0 record and a claimed a South Carolina 4A Division II championship alongside future teammates Stephon Gilmore and Jadaveon Clowney.

Holloman said that during the first game, South Pointe was up 21-0 in the first quarter without the offense being on the field, while he returned a punt and Clowney picked up a fumbled kickoff return and a ran for a touchdown.

“And that’s when I knew that we had a special team," Holloman said.

This was also the moment when Holloman realized he wanted to continue pursuing football. After receiving a scholarship from the University of South Carolina, he was one of three freshman that enrolled in January 2009, including Gilmore.

Holloman posted 30 tackles and played in all 13 games during his freshman year as a Gamecock.

Despite the connection that he had with former South Carolina head coach Steve Spurrier, one of the biggest influences for Holloman to play for South Carolina was Ellis Johnson. Johnson was South Carolina's defensive coordinator three out of the four years Holloman played.

Johnson’s connection with the defensive side of the ball helped Holloman make his final decision to come to South Carolina.

As Holloman continued his football career at South Carolina, his friendships with Gilmore and Clowney developed even further.

“Me and Stephon, we have been friends since we were 11 years old, 10 years old, playing basketball, so we were always close all the way through college and even to this day," Holloman said.

Even though Clowney signed with South Carolina in 2011, Holloman said that when Clowney came to Columbia, it was almost as if he had to watch out for his baby brother.

By the time Holloman reached his senior year at South Carolina, he was fourth on the team with 57 tackles and had 207 career stops.

His journey didn’t end there. Holloman was selected by the Dallas Cowboys in the sixth round of the 2013 NFL Draft.

Even though Holloman faced injuries before, one injury during a preseason game against the Baltimore Ravens ended his football career as a player. Holloman was diagnosed with a narrow spinal column condition and announced his retirement from the NFL on Aug. 25, 2014.

Holloman was given the opportunity after his injury to be a graduate assistant coach at South Carolina. This is when Holloman found his chance to still pursue the game in a different way.

This position led him to work with other linebackers and mentor former South Carolina players like Skai Moore and Bryson Allen-Williams.

“It was a good experience as far as learning the other side of things from being a player to a coach, and it was a great introduction to my coaching career," Holloman said.

The connection between Allen-Williams and Moore continued after Holloman left the coaching staff at South Carolina. He still talks to both of them, he said.

"I wished [Moore] good luck before the combine and things like that, but I try to just let them know that I am here for them ... I try not to bother them," Holloman said. "I just let them know every now and then that I am thinking about them, if they need anything to call me.”

After losing his sister and wanting to be closer to his family, Holloman hoped to see South Pointe in his future more than ever before.

Holloman said he does not take the transition from being a player to coach for granted and finds it challenging to teach others the skills he showcased.

“These kids nowadays are so focused on what is right in front of them, and trying to get them to see the big picture is the toughest part," Holloman said. "But at the same time, the best part and the most rewarding part is when we get people to do it.”

Even after being away from the South Pointe football field for eleven years, Holloman has some of the same assistant coaches alongside him.

“Those guys have remained the same and I'm really happy to keep those guys on staff and hoping they can help me just as much as they have helped other coaches," Holloman said.

Even with this new opportunity, Holloman said he hasn’t forgotten his South Carolina legacy. A few weeks ago when the South Pointe women’s basketball team played at Colonial Life Arena for a state championship, Holloman came down and was able to tour the new Long Family Football Operations Center in Columbia.

“The coaches are always very welcoming when I come there, from Coach Muschamp all the way down, so the connection there is still strong," Holloman said.

Holloman said he wants to use his experiences from his football career to inspire the young men he will coach at South Pointe. He lives by the saying “don’t get out-worked.”