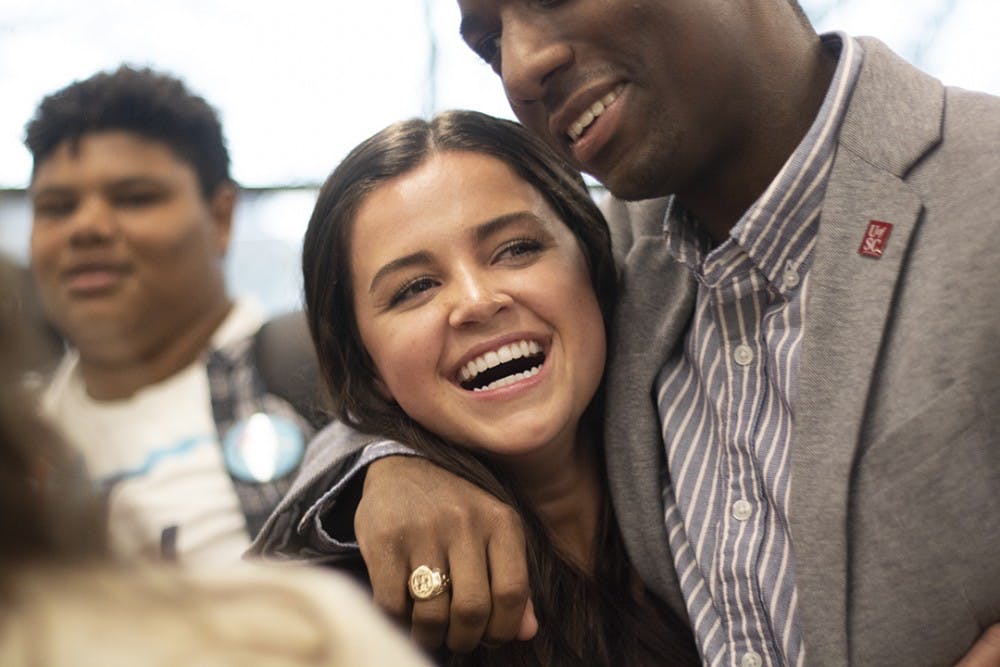 The Rankin-Lewis campaign staff cheered and congratulated Kate Lewis Wednesday night after she became the treasurer-elect for USC Student Government.

Lewis won the treasurer position with 4,702 votes, or 64.7 percent of the voting population. She ran for treasurer alongside presidential candidate Luke Rankin. While her partner is in a runoff election for president, Lewis and the campaign staff are celebrating.

“Literally none of this would be possible without all of my friends and family and our campaign staff that helped put this together,” Lewis said. “It’s really not even about me at this point at all, it’s just about everybody that put so much time and energy into this campaign, and I couldn’t be more thankful for them.”

Lewis had various experiences in governing bodies, first serving as a member of RHA in her freshman year and then moving onto the Senate Finance Committee her sophomore year. However, Lewis said that it was after she applied for and began working as the director of operations on Emerson Odagis' treasurer staff that she began considering running for the position herself.

“After Emerson won, I was like, ‘maybe this is something I really wanna do,’ because I didn’t wanna leave the office,” Lewis said. “I was like, ‘how can I continue to be involved?’”

Lewis and Rankin ran for executive office on a shared platform of transparency and accountability.

“We campaigned on the fact that it’s the students’ money that’s going back to serve them, and they should be able to see where it’s going at all times,” Lewis said.

Lewis also hopes to increase the number of comptrollers serving the student body, as well as make them more knowledgeable and accessible to students when drafting budgets. Comptrollers act as a liaison between the finance committee and various student organizations, and are a resource for helping organizations draft budgets and allocate funds.

Lewis hopes to rebrand, better advertise and potentially rename the New Initiative Fund, as she said she believes many students are unaware of the fund and how it could benefit them.

“Just better marketing, make sure everybody is well versed on what this fund is for, how to use it, so that it can be taken advantage of and isn’t just sitting around, and is really being put to good use for students who would like to use it,” Lewis said.

Kyle Caccavale, a third-year sport entertainment management student and member of the Rankin-Lewis campaign staff, spoke about Lewis’ character and how he believes it will make her a good treasurer.

“I think she’s a very good face for the school for that job just 'cause she’s such a likable person,” Caccavale said. “I think that she’ll be able to get her message across very easily to the students.”

The presidential runoff is set for next week, and it's still unknown whether Rankin will serve alongside Lewis on the executive staff as the president. Lewis and her team said that while they would certainly hope that Rankin is elected, it won't be determinant in the effectiveness of her position.

Phillip Freeman, a third-year psychology and chemistry student who will serve as Lewis’ chief of staff in the new term, believes Lewis is able to easily blend and work with various groups of students.

“She can work with many different groups of people, and I know that her and Lyric currently work in the LSC together now as Lyric’s on the president’s staff and she’s on Emerson’s staff,” Freeman said. “I think that since they already have that working relationship that it will be successful no matter who’s in that president’s office.”

Lewis said she's just grateful for her election win, and excited for what is to come.

“To the rest of the student body as a whole, I’m just so excited to serve you as your next student body treasurer,” Lewis said. “I know what it takes to be in this office, and I’m ready to just hit the ground running.”