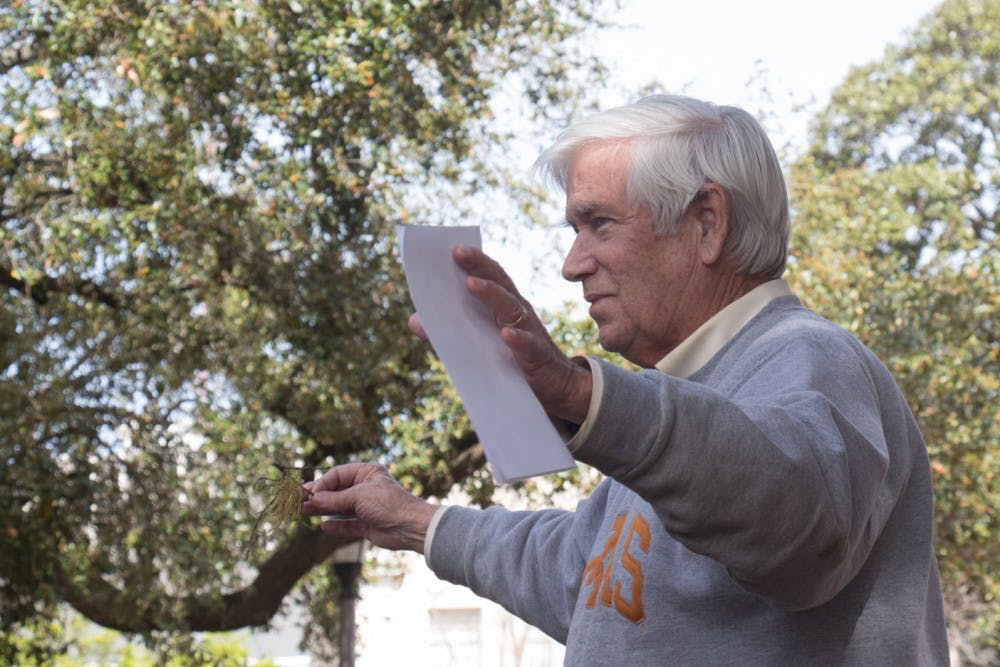 Mancke is a graduate teacher in USC’s School of the Earth, Ocean and Environment and is an advocate for exploring nature. Mancke uses his experiences as a naturalist to answer questions about what individuals find in nature.

“When you learn about connections in the natural world — how things fit in — you can go anywhere in the world and be at home," Mancke said. "I’ve done this all my life. I’ve gone to pretty strange places and felt right at home with connections because they don't change.”

In the past Mancke has taught high school biology and geology, served as a natural history curator at the South Carolina State Museum and conducted various nature walks across the country on NatureScene for 23 years. Jessica Ryan, a homeschooling mother of four kids, describes how she has been impacted by Mancke’s contributions as a naturalist in South Carolina.

“I grew up watching Rudy Mancke on South Carolina ETV when I was a little girl," Ryan said. "He would just go around to different places in South Carolina and tell us about different things. I always remembered just being so fascinated by it, always thinking, 'Man, it would be so cool going on a nature walk with him.'”

Mancke talked about many species native to South Carolina and their history. He identified different objects brought to him by students and South Carolina residents, and among these objects include bones from white tailed deer, flowers from blueberry plants, American beaver teeth and Eastern Mud Snake skins.

Riley Reynolds, a fourth-year film and media student, attended the event for her ethnoecology class. Her interest in the talk was elevated by the atmosphere that Mancke’s talk created.

“It’s really interesting to talk about it in a casual setting. It very low pressure and doing it for the knowledge of it. Everyone here is really interested in it 'cause they’re here by their own choice,” Reynolds said.

Mancke touched on some of the skills he gained as a result of his many nature walks and personal research, including how to skin a snake.

“Just get the skin off and put it wet side down against the board," Mancke said. "You can’t put too many thumb tacks. Leave it in the sun, let it dry and take the thumb tacks out. Rub off the shed skin, which lets the color come through, and then peel it carefully. ”

Mancke also described the changes in nature that result from human intervention, and he explains the effects of that intervention through the objects people bring to him. One example that came up was the situation of the removal and reintroduction of American beavers in South Carolina.

“You know who else had beavers all over the state in the 1700s? The state of South Carolina. We were transporting beavers and deer to Europe. We wiped them out," Mancke said.

Karen Magradey, the new assistant director of the Koger Center, feels that Mancke provided her with knowledge to better appreciate nature.

“It makes me pay attention. You just walk by and it's all background and you just stop take a minute and actually look and realize how special it is,” Magradey said.