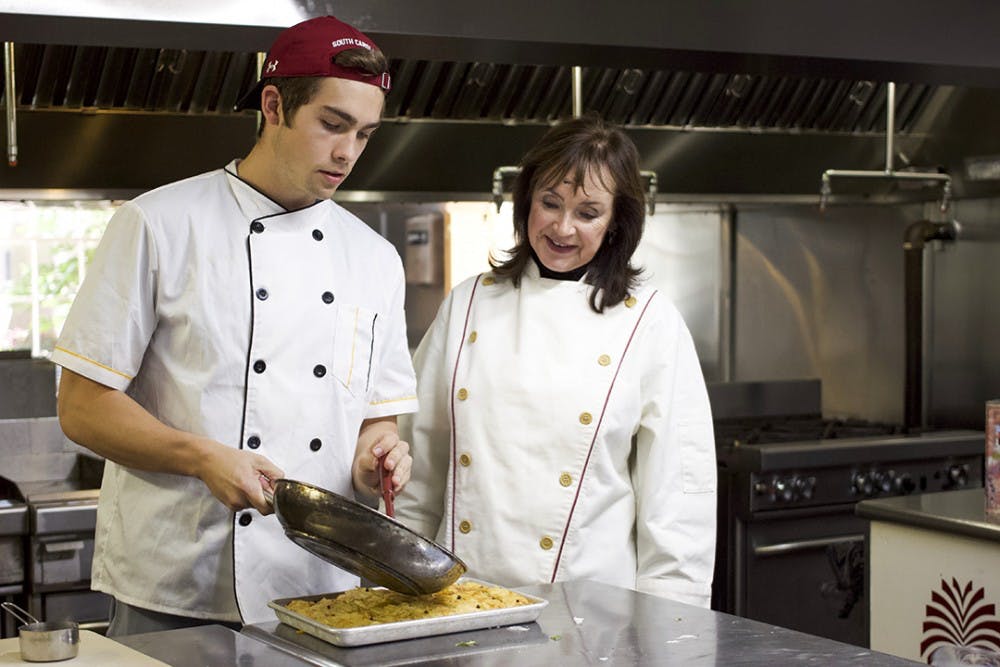 Patricia Moore-Pastides looks out onto USC's historic Horseshoe through the second-floor window of the President's House, the place she's called home for the past 10 years. It's a sunny, chilly day with a few students relaxing in the grass and many rushing on the brick pathways to class.

She said living on campus makes her feel more connected to students, and she recalled stories from over the years on the Horseshoe — from snowball fights to March Madness.

When USC men's basketball defeated Duke two years ago, Moore-Pastides went to bed and heard what she said sounded like elephants running in between Rutledge and the President's House.

"They were so excited, there was probably like 400 students out there and then they started chanting 'cancel classes,'" she said. "So I called Harris and said, 'You better come home because the students are out there and they're excited.'"

Next to the room Moore-Pastides is standing in near the stairwell is a chair that was bought for then-pope, St. John Paul II, for his 1987 USC visit. The chair has eagles on it, symbols of Poland, John Paul's home country.

John Paul was visiting for a Christian ecumenical council and students had to leave the Horseshoe for security reasons. Students who lived there made shirts that said, "I was moved by the pope."

"The interesting thing about that is that he got canonized and became a saint in 2014," Moore-Pastides said. "So now this is a second order relic in the Catholic Church because it held the pope's body when he was here."

But for the sake of her students, the first lady had a way of giving that relic some personal charm of her own.

"I used to let the students just plop down in it but it started to tear, the fabric is so old," Moore-Pastides said about the chair.

The interactions she's had and memories she's made with students are what Moore-Pastides said she'll miss the most. For her 2017 book, "At Home in the Heart of the Horseshoe," she talked to past university presidents, first ladies and alumni. This way, she said she was able to get an understanding of what life was like over the years in the President's House from other perspectives than her own.

In the 1950s, first lady Virginia Russell — as in the Russell House namesake — would invite each fourth-year student over to dinner in the President's House back yard before their graduation. Since USC's undergraduate population has grown throughout the years, Moore-Pastides said she has tried to continue this tradition by inviting different organizations over, like the band or sports teams.

She also mentioned how students under the Russell presidency, now in their eighties, still remember specific things like how Virginia Russell dressed. After talking to different first ladies, she said she understands how their legacies live on at USC, and she hopes to be remembered not necessarily for how she dresses, but for how she lives.

"I hope that when people remember me, they will remember me for promoting those positive lifestyles that contribute to good health," she said. "So, whether that is caring about our mental health, whether that's eating right, whether it's exercising, meditating, for taking the time to pay attention to our spiritual selves. I hope that somehow my legacy will be in that area."

Moore-Pastides is involved with a lot on campus, but her passion lies in public health. She has a master's degree in public health from Yale University, worked as county health supervisor for DHEC and worked with the South Carolina Campaign to Prevent Teen Pregnancy. Prior to Harris Pastides' presidency, he served as dean of the Arnold School of Public Health. Because of this, Moore-Pastides said her transition into creating health and wellness initiatives on campus as first lady was smooth.

Around the time of the Farmers Market starting, she was also creating the organic vegetable garden at the President's House.

"When we've had enough vegetables to give away, like in the summer, we bring the vegetables right out there and let people take some, and usually we have recipes that show what you can do with them," she said.

One of her proudest accomplishments was cutting the ribbons for lactation rooms on campus where people returning from maternity leave have a place to breastfeed on campus.

Along with her health and wellness initiatives she's involved, Moore-Pastides is an adjunct faculty member in the College of Hospitality, Retail and Sport Management where she teaches the course Healthy Mediterranean Cooking. Through this class, she said she's able to pass on her passion for healthy eating habits as well as her love for Mediterranean food she's gained after several trips to Greece with her husband.

Moore-Pastides joked that when President Pastides was deciding on taking on the role of USC's president they almost got a divorce.

"I'm kidding of course," she said.

President Pastides was offered the president position at two other universities: University of Massachusetts Amherst and Georgia State University. However Moore-Pastides said she urged her husband to take on the position at USC because of the existing first lady role.

"I had experienced — as the wife of a dean and the wife of a vice president — the graciousness of the first ladies that came before me and I really wanted the opportunity to fulfill that role at the University of South Carolina," she said. "And I felt like the same role didn't necessarily exist at the other universities at that time."

Another reason she said she wanted President Pastides to stay at USC was her own love for the university.

"I already had fallen in love with the culture," Moore-Pastides said. "I felt that it was one of the top-tier, major research universities in the country, and yet it had the culture of a smaller college that felt so friendly and nurturing."

Ten years later, Moore-Pastides and her husband are leaving the university and looking forward to spending time with family. Her mother is 89 years old and she promised she'd be there for her 90th birthday. Her family is scattered all over the U.S.

And for the future spouse of the next university president? She hopes they'll keep up with the vegetable garden.

"We had a rocking good time with the vegetable garden because we grew what we wanted to serve at our events," she said. "We grew vegetables that we wanted to bring to the farmer's market or to make dishes out of for people to taste or to use in cooking classes which was really fun."

However, she's looking to make it more educational. She learned about the Carolina Gold Rice Foundation that has identified and saved heirloom seeds from prior to 1850 that were either indigenous to South Carolina or brought over from West Africa through the slave trade.

"The next first couple, they'll have their own interests and it may or may not include gardening," she said. "But I think if this becomes a feature that other people besides just me can take an interest in on campus, then maybe it has a better opportunity of sustainability."

Other than the vegetable garden, she said she hopes the next spouse of the president continues to entertain and connect with students.

"I really have a heart for our students," Moore-Pastides said. "And I want to go out trying to be as uplifting as possible to all our students, to have them recognize that they're all worthy."