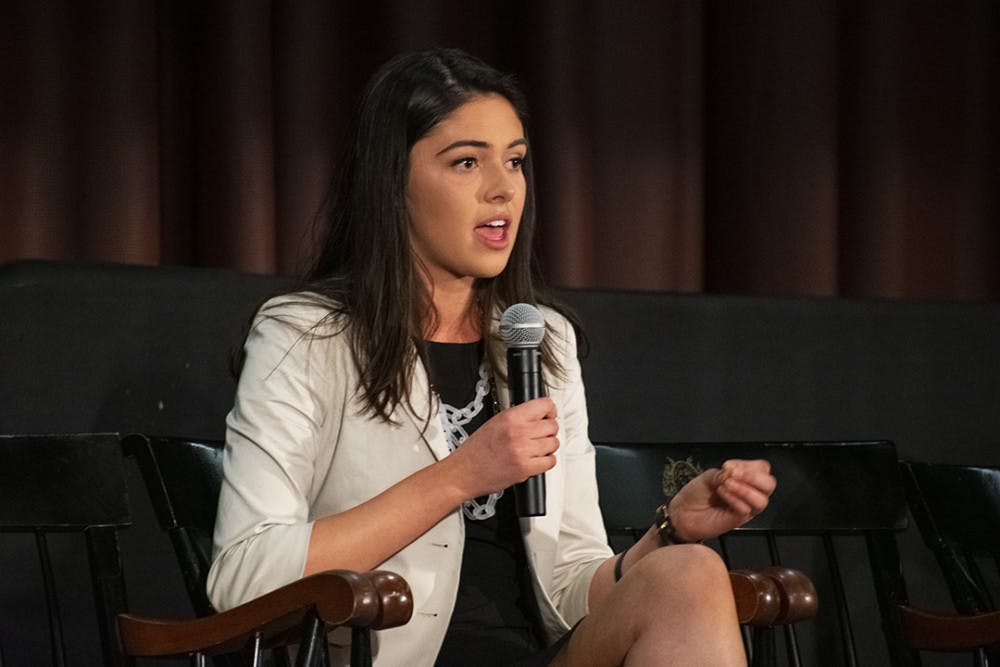 After the announcement, the FUSE campaign staff erupted in applause as Lyric Swinton, Davish’s presidential running mate on the FUSE ticket, and others crowded around Davish to embrace her.

Davish says she could not have won the race without the help of those closest to her.

“I never thought in a million years when I was a freshman here just kind of figuring out my space that I would have all these people behind me supporting me,” Davish said. “I’m so thankful for the road that brought me here and the people who have lifted me up along the way.”

Davish says there has been little sleep for her campaign staff leading up to the days of the election as they have all worked together to prepare for the voting period. Additionally, Davish says that having a supportive team helped her secure the win.

“I think in regards to campaigning, it was just having this incredible team behind us that believed and knew that I was the right person for the job,” Davish said.

In terms of experience, Davish says that working with current Student Body Vice President Mills Hayes as her chief of staff has prepared her to take on the same role with no transition period.

Current Student Body President Taylor Wright, who has known Davish since her time as a freshman council member, also spoke to Davish’s experience that has prepared her to take on this role. Wright said as a hands-on member of Student Government, Davish has helped run programs and plan events, making it possible for her transition into the role of vice president to be seamless.

Wright has also had the opportunity to work closely with Davish, and says her ambition was clear during her time as a freshman council member.

“It’s been amazing to see her grow from a freshman — who was kinda shy, a little quiet — to a leader who’s going to make a huge impact on our university,” Wright said.

Touching on the election season’s widely discussed value of approachability, Davish says that even though she will be student body vice president once she’s inaugurated, people can still come to talk to her.

“I am not this figure that’s so high up that they cannot approach me,” Davish said. “I want to get started on everyone’s initiatives and what they believe in, and I’m going to hit the ground running doing that.”

Looking forward, Davish says she is excited to build her staff.

“That's the key in having a good executive office, making sure the people behind you know what they’re doing as well and are willing to work with the people,” Davish said.

Maggie Anderson, a fourth-year international business and finance student, has had the chance to get to know Davish during their time together in the Zeta Tau Alpha sorority, where Anderson has served as Davish’s big.

Anderson says that Davish spoke with her about running for vice president back in January after enjoying her time working on Hayes’ campaign staff.

“She has really enjoyed working in high leadership positions, and I think she’s learned a lot from that,” Anderson said. “Throughout this whole campaign process I’ve just seen her so committed to this university and just being a leader and someone everyone can look up to.”

Davish says her desire to run for this office is rooted in wanting to give back to the Carolina community after the love and sense of home she felt here.

“If I can make one Carolinian’s experience a little bit better, then I’ve done my job,” Davish said, “and it’s my goal to use this role to help every single student on campus.”