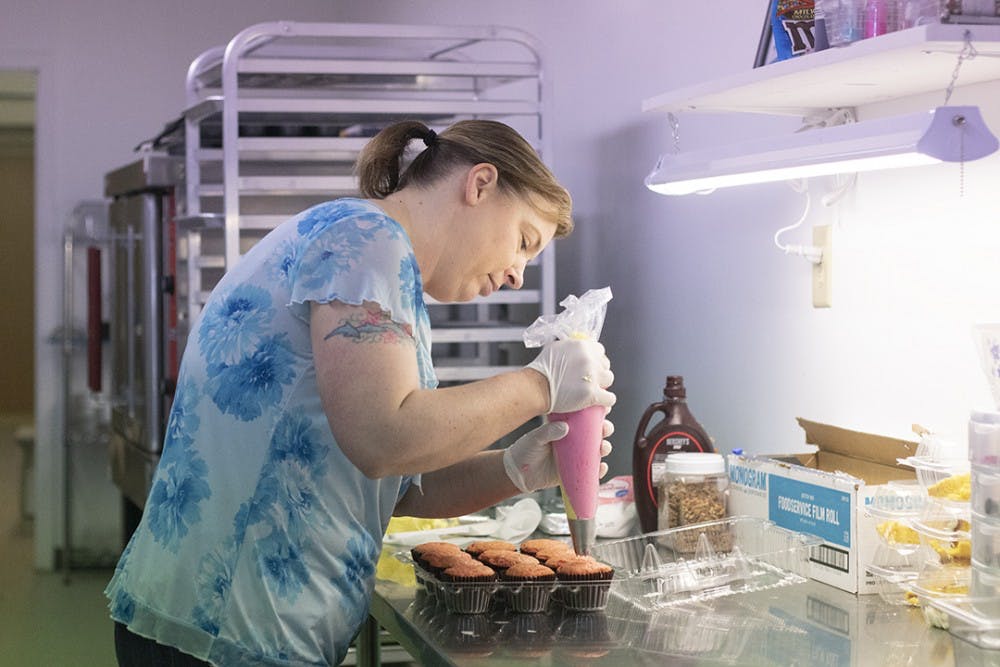 The scent of sugar wafts through the air as customers enter Buttercream Dreams with the anticipation of indulging in a sweet treat. Perfectly-frosted cupcakes sit inside glass cases, perched beneath a golden chandelier with pink and white decorations that reminds one of candy canes.

Buttercream Dreams is a new dessert shop in West Columbia inside Tylar Rose, a pageant and prom dress store. Owner Jolene Bailey opened Buttercream Dreams a few months ago and is the only employee at the shop.

Bailey said she has always liked to bake, but her passion took off when her daughter became involved in competitive cheerleading at an early age.

“Their big thing is at competitions you do little treat snack bags, so I started making cute little themed cupcakes based on the theme of the competition or the theme around a holiday that it’s close to,” Bailey said.

The parents of other cheerleaders loved her baking so much that they started requesting cakes of their own, which Bailey eagerly fulfilled.

Bailey, however, got tired of baking until the early hours of the morning while working full-time for UPS. Opportunity struck when a friend of hers, the owner of Tylar Rose, suggested Bailey open her shop inside the dress store.

“It was just kind of one of those spur of the moment, ‘Hey, why don’t you come in here and open up?’” Bailey said.

The combination of dresses and desserts might seem uncommon, but Bailey said she tries to make it a seamless transition.

“It’s like the best of both worlds,” Bailey said.

Alongside her favorite cupcake, lemon with lemon buttercream, Bailey always has the staple flavors of vanilla and chocolate and the customer-favorite almond-with-almond, in her rotation. However, she said she is always looking for unique flavors to inspire her next batch of cupcakes, which has resulted in flavors like Milky Way and caramel apple pie.

“I’ll go down the grocery aisles or the ice cream aisle and pull ideas from there for flavors,” Bailey said. “You never know, I might throw something out new next week that I have never had before.”

For those who don't prefer cupcakes, Bailey has more to offer. She bakes weekly specials, featuring pound cake slices on Wednesdays, turnovers on Thursdays and cheesecake slices on Fridays.

These special baked goods combined with perpetually-rotating cupcake flavors guarantee there is always something new for customers to look forward to during their next visit.

As for the future, Bailey doesn’t know what it holds for Buttercream Dreams yet.

“I’m only one person, so I’m the cleaner, the baker, the cashier, the cook,” Bailey said. “Just maybe one step at a time."

There’s one thing that's for sure: As one of the signs in Buttercream Dreams reads, Bailey will continue “making sweet things happen” for a while, one cupcake at a time.