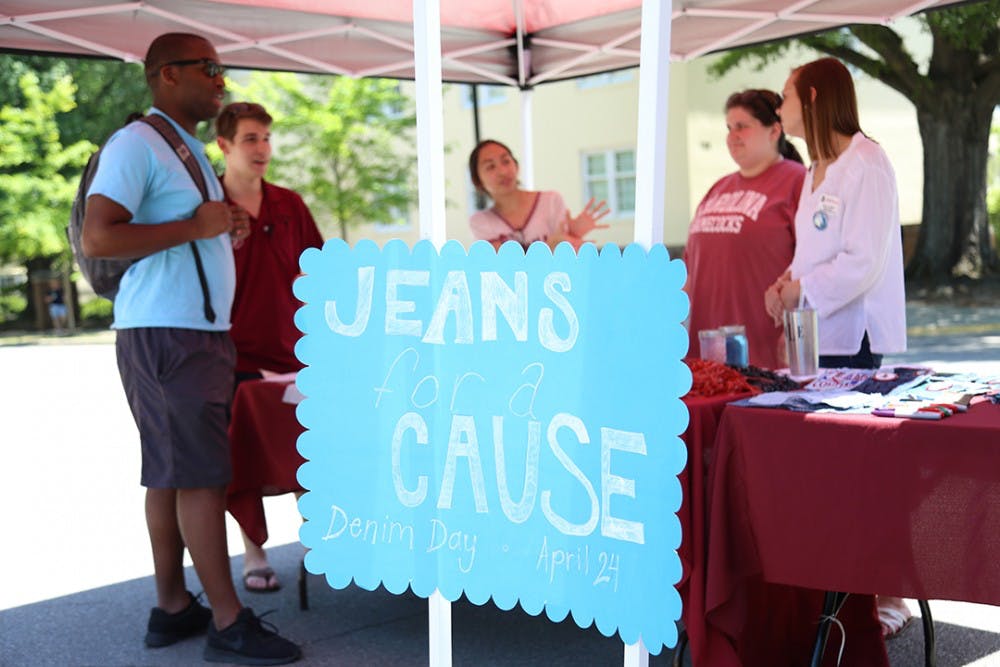 Denim Day, an event aimed to inform USC's population of the definition of consent and to raise awareness of sexual assault, was held on Greene Street on Wednesday. The event was organized by Sexual Assault and Violence Intervention & Prevention (SAVIP), the Office of Student Conduct and USCPD.

The history behind Denim Day comes from a court case in Italy in 1992 where a young woman was raped by her driving instructor but he was not charged.

“The judge decided that because she was wearing very tight jeans that she must have taken her own jeans off,” Jennifer Taylor, a SAVIP employee, said.

The women of Italy decided to protest the unfairness of the court case ruling by wearing jeans. One of the messages that Denim Day relays is clothing does not equal consent.

“We know that what someone is wearing doesn’t mean that they are consenting to sexual activity, and we also know that it is not going to be a barrier to stop somebody from assaulting someone,” Taylor said.

Denim Day's goal is to define consent and give USC's campus power against sexual assault.

“Consent is very clearly defined within our campus here at USC. It's clear consciousness, willing and affirmative. If you don’t have any of those pieces, then that is not consent,” Taylor said.

Denim Day also encourages survivors and victims to use resources on campus and everyone to be informed, have a voice, shed light on the subject and feel confident in opening a discussion.

“Just be a good bystander. When someone does come to you seeking help, be a good listener, and tell them that it isn’t their fault, things like that, and also point them towards our health center because we have people there that are trained to help,” Sharla Williams, a first-year psychology student, said.

At the event, there were jean pockets on which students could write messages such as, "This is not an invitation to touch me," and "No means no." The pockets also had information for resources on campus such as counseling at the health center and SAVIP office.

“It is important so that those who have been assaulted can speak up more, and it should reduce the fear. You should be able to feel comfortable wearing what you want to wear, and specifically with this event," Williams said. "It is just to take the blame off of victims, and to put the blame on the person that actually did the assault."

The main takeaway from the event, according to Taylor, is that understanding consent is critical.