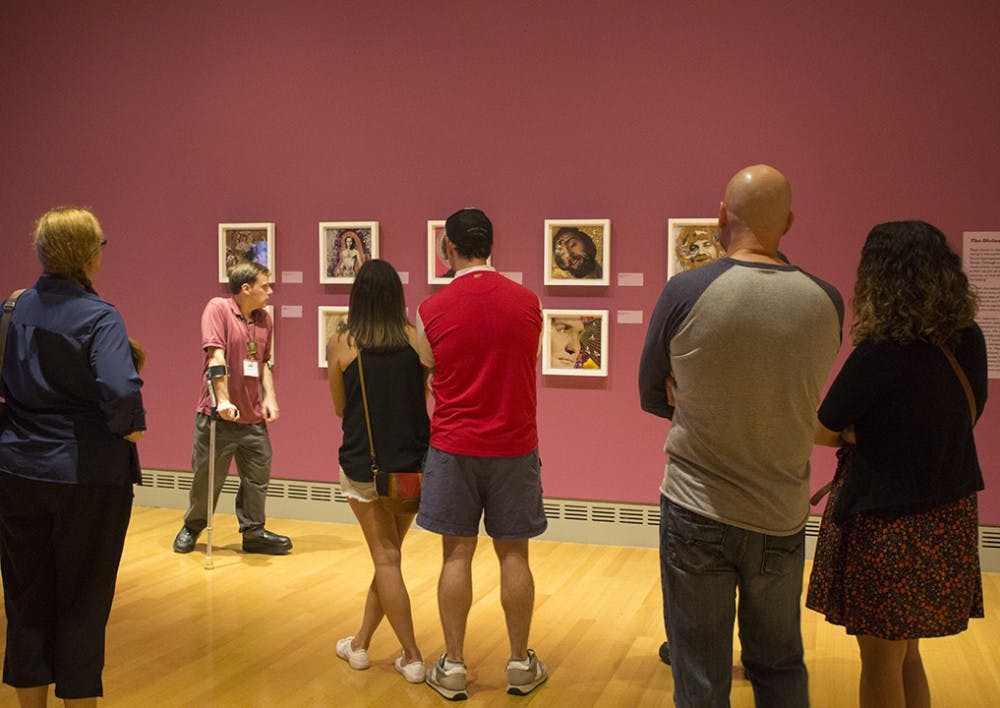 Almost 50 people gathered in Columbia Museum of Art’s lobby. They weren’t roaming the galleries filled with renowned artwork. Instead, they were editing Wikipedia articles.

The event was part of Art+Feminism, which took place on a Saturday afternoon last month. Art+Feminism is a campaign that encourages community groups to host edit-a-thons throughout the world to alleviate what it says are gaps in Wikipedia’s coverage of women, gender, feminism and the arts. The organization focuses on Wikipedia because it is one of the most used sites in the world.

Local partners include the museum and USC's School of Visual Art and Design.

Felleman compiled and shared a list of female artists, along with their details, pictures of their artwork and links to more information, with the attendees and on the event's Facebook page. The materials served as a basis for some of the team’s efforts on Saturday afternoon, and others came with their own ideas.

Because fewer than 10% of Wikipedia articles are written by women, the Columbia Art+Feminism edit-a-thon focused on women creating and editing Wikipedia content, including creating and updating pages about female artists.

“It’s really great to be part of a global effort to do our part in improving, I guess you could say, representation of women as both creators of content and as subjects of content on Wikipedia as a sort of starting point for bringing more attention to those people in the world,” Felleman said.

In the United States, 51% of visual artists are female. However, a recent Public Library of Science survey of 18 prominent art museums in the U.S. found that out of more than 10,000 artists featured in the museums, 87% are male.

Museum curator Catherine Walworth said a lack of representation of artists of color and women was one of the main drivers for the renovation. The permanent collection is no longer displayed in chronological order because women and people of color were left out of the conversation for most of art’s history.

The change meant gallery visitors “didn't have to wait ‘til gallery 15 to see women and artists of color,” Walworth said. “It would be right up front and center — first gallery.”

To further emphasize female contribution to the arts, the Columbia Museum of Art had its unofficial “year of the woman” in 2018, including solo exhibits from mostly female artists: Renée Cox, Imogen Cunningham, Jane Peterson and Katie Pell.

Walworth said she doesn’t think artist gender affects ticket sales for the museum but rather the brand name an author carries. For example, the Jasper Johns and Jackson Pollock exhibits have been more popular this year, but in 2015 the museum’s Georgia O’Keeffe show had more attendees than others during that year.

A report by The Art Newspaper found that about a quarter of U.S. solo exhibitions are dedicated to female artists, placing Columbia art centers above the national average.

What Columbia’s doing to grow its inclusivity

“We're definitely, like many museums, trying to make or making a concerted effort to be more inclusive and represent the people that are in our community,” Milena Engh, Columbia Museum of Art public and media relations specialist, said.

She said the museum is doing this not just through its renovation and “year of the woman,” but by participating in broader events such as a national social media campaign for Women’s History Month.

Cynthia Boiter, the Jasper Project’s editor-in-chief, said she thinks Columbia has a strong community of both female and male artists. The Jasper Project describes itself as a project-oriented arts facilitator that provides Columbia communities with arts engineering and communication. It also produces a magazine published twice a year.

“The Supper Table” is one of Boiter's recent projects and is a Southern version of Judy Chicago’s 1979 feminist exhibit “The Dinner Party.” The Jasper Project is working with local arts organizations to honor 12 influential and diverse South Carolina women, including Eartha Kitt and Mary McLeod Bethune.

The ongoing project features a triangular shaped table, 12 feet long on each side, with each place setting created by South Carolina artists. Surrounding the table are 120 tiles created by community members naming other influential South Carolina women. Local actresses will perform theatrical presentations for each of the women in September.

“The Supper Table” will bring together more than 50 visual, literary, theater and media artists and 120 community members to create the table and tiles.

Through projects like this, Boiter said she hopes to break negative stereotypes surrounding South Carolina.

"If you're from out of the state, people think we're a bunch of racists — ignorant people,” Boiter said. “So, what we're trying to do is change the narrative about South Carolina, so when the people think about us they'll realize that we're actually a bunch of brilliant intellectuals and amazing artists.”