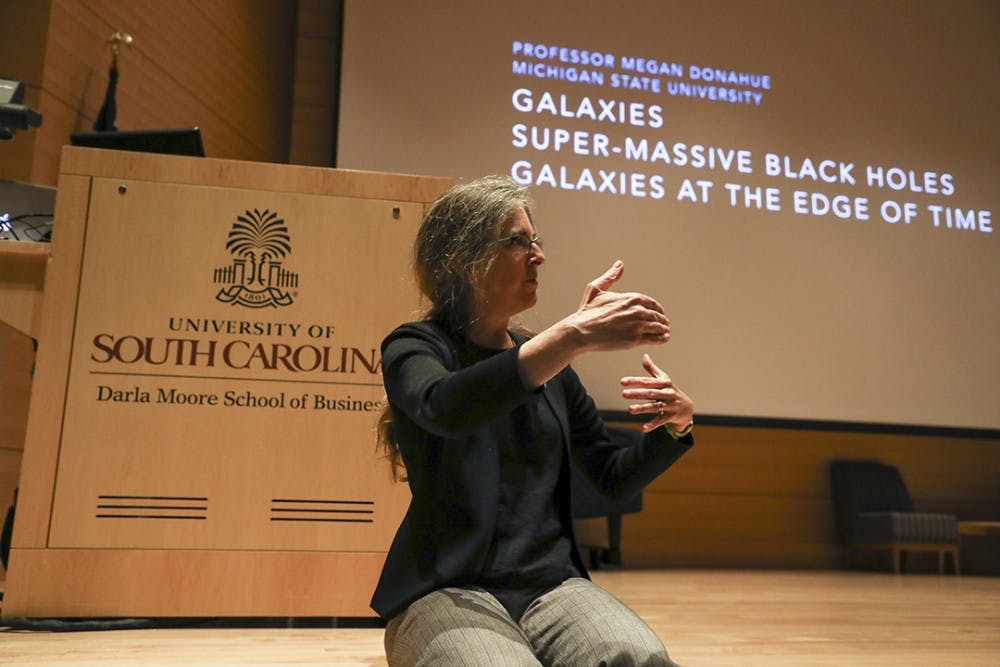 Megan Donahue, president of the American Astronomical Society, titled her talk "The Role of Supermassive Black Holes in the Growth of Galaxies." She showed images of galaxies including the Milky Way and went on to describe how a picture of the universe can yield important information about the early formation of galaxies long ago.

“There was just radiation and hydrogen and helium and dark matter — that's it," Donahue said. "Over time, gravity works to make those initial chains bigger. And eventually, if you have a big enough collection of gas, you can start to make stars."

Donahue studies clusters of galaxies and the characteristics of intergalactic gases, especially in the context of galaxy formation. Her research consists of models and observational studies on cooling flows in the gases that flow within cluster galaxies.

Donahue was named a 2016 fellow of the American Physical Society, which recognizes members who have conducted innovative research in the physics field. Donahue touched on how many telescopes can be used to create a complete picture to study far away galaxies like M87, a massive cluster galaxy structured much like our own Milky Way.

“These telescopes can be combined to make the effect of a telescope of essentially the size of the planet Earth,” Donahue said.

“In a summer thunderstorm, the updraft is pulling gas close to the ground up to high altitudes. That gas then can expand and cool and condenses into droplets, which can then form mini rainstorms,” Donahue said. “This is the same idea, except it’s in very, very hot gas, and instead of turning into water, this is going from 10 million Kelvin gas to a few million Kelvin.

Kara Westmoreland, a third-year student at Spring Hill High School, said that her love for astrophysics brought her to Donahue’s talk.

“I was really intrigued by the recent picture to come out about the black hole, and so I thought it would be interesting to hear a professor talk about it and just hear what she has to say about it,” Westmoreland said.

Donahue originally studied physics and did not truly discover her passion for astronomy until graduate school.

“I applied to physics programs, but every time I looked at the research program for an astronomy program, I was like, ‘Oh that's really exciting.' I kind of felt that little buzz that I really didn't feel about physics,” Donahue said.

Donahue hopes to do more research on X-ray astronomy and spectroscopy along the lines of future projects like Athena, consisting of a NASA and European Space Program (ESA) partnership, and Linx, which will provide better pictures of galaxies accompanying spectroscopy. Spectroscopy involves the investigation of light produced when matter interacts with or emits electromagnetic radiation.

Donahue’s talk is part of a larger series of talks hosted by the Office of the Provost and the Office of the Vice President for Research called “Distinguished Lectures Series in Physics and Astronomy," which hopes to attract undergraduates and a larger public audience.

Francie Cashman, a sixth-year physics and astronomy Ph.D. candidate and volunteer for the event, said she found value in helping put on the lecture.

“Attending these lectures themselves is already incredibly inspiring, but when that’s something that you aspire to do, coming and helping out is a really great way to meet with them, interact with them and stay inspired,” Cashman said.