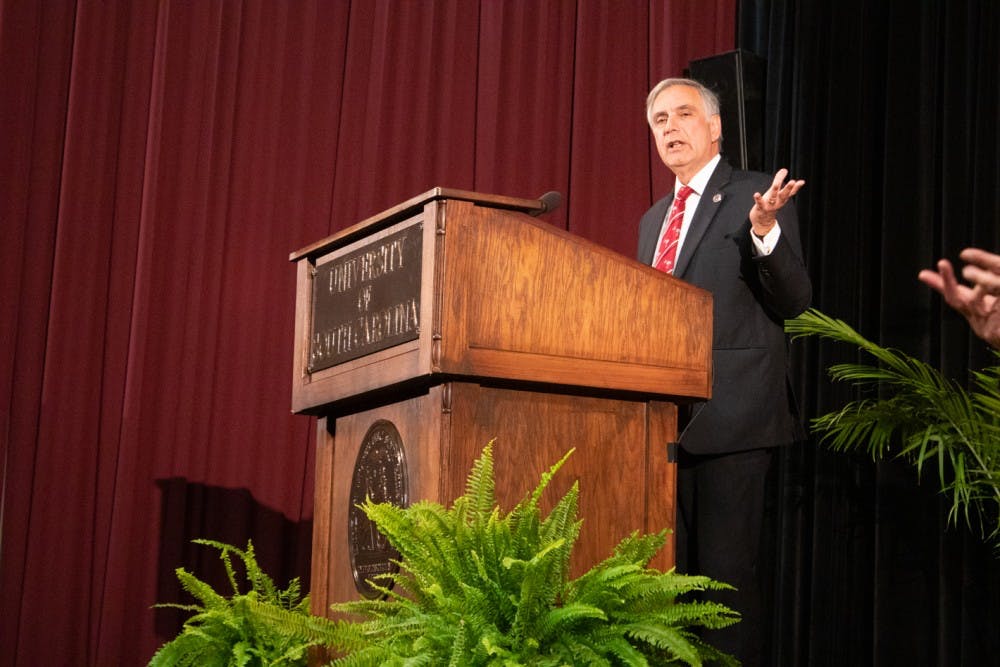 University President Harris Pastides delivered what was truly his last lecture, as he spoke about how to build a successful life and career as a part of the Last Lecture series.

The Last Lecture series is hosted by Scholars United and was held in the Russell House Theater on Wednesday. The series urges nominated professors to give a lecture as if it’s their last, though it normally isn’t. For Sarah Baron, a second-year exercise science student, Pastides' lecture was so important because it was Pastides' last lecture.

Pastides plans to retire in July. Although he insisted he would not be offering much advice to his successor, Pastides did share that the key to the university and student’s success is communication.

“Communicating with our students clearly and often, genuinely and authentically, is essential,” Pastides said.

Pastides’ “blueprint” for life had three main points. First, he encouraged students to write down goals for themselves. He told students to set the bar high and make their goals as specific as possible.

“Being happy is not a goal. Achieving something that will make you happy is,” Pastides said.

He insisted that the point is not to reach all of your goals, nor is it to be perfect. The point was to chase perfection in order to achieve excellence.

Caroline Favret, a first-year international business student, said she always stresses about being perfect, so that was her biggest takeaway.

“I think one of the main things he said was to just be genuine and try your hardest in everything you do,” Favret said.

Pastides’ second point was on the importance of critical thinking. When presented with information, be it online or from a news source, Pastides’ said all students should have the same initial response — prove it to me.

Pastides' third and final recommendation was less tangible. He asked students to be resilient and optimistic as they approached life and its challenges.

“In my life I’ve lost both parents and a father-in-law, had disappointments in career and in health, but I still believe that life is the most cherished thing I have,” Pastides said.

Although Pastides seemed to think he was getting a “weekend off” in his retirement, the university’s first lady, Patricia Moore-Pastides, had other ideas to ensure that she and her husband continued to share their words of wisdom.

“My plan for us is that we’ll be writing next year,” Patricia-Moore Pastides said.