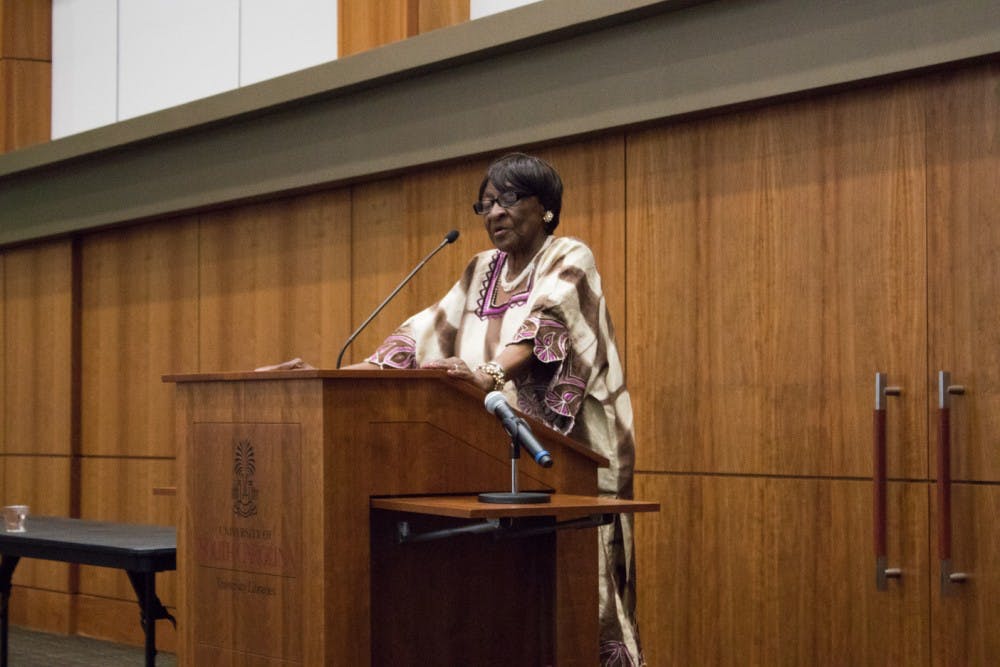 The Hollings Special Collections Library’s open gallery of its current exhibit, Justice for All, brought Louise Brown, a civil rights and social justice advocate, to USC to speak about her experiences in the 1969 Charleston hospital workers' strike on Saturday.

Brown was one of 11 people fired from South Carolina Medical College Hospital in 1969. This was the result of a protest surrounding the issue of equal wages, fair treatment and the right to unionize for African Americans at Charleston hospital.

Brown described the difficult situation with the hospital strikers and the opposition, including former governor Robert McNair and hospital president William McCord, during the strike.

Brown said she believes in fighting for her values. She described a time where she, along with other hospital strikers and students who helped them, were beaten and taken to jail for protesting and laying in the streets.

“I don't mind spending time behind bars. It’s OK, as long as I'm not going for murder, I don't care," Brown said. "If it's right to help people, I’ll be willing to be there for them."

African Americans working in the hospital went on strike for 116 days. At the resolution of the strike, the 11 workers went back to work Medical College Hospital and their wage increased by 13 to 17 cents, amounting to approximately $1.60.

Brown said the root of most of her troubles during and after the hospital strike were the way she was pushed around. The treatment continued after she was rehired, resulting in her being fired again five years later.

“I can listen if you talk to me like I am somebody. But if people talk to me as if I am a backdoor, back in the years when you had to come through the backdoor and say ‘yes sir, boss,’ I can’t handle that,” Brown said.

Bobby Donaldson, history professor and director of USC's Center for Civil Rights History & Research, felt it was important for Brown to speak on something not many people recognize as a goal of the Civil Rights Movement.

“We do know that the struggle was about better wages, better working conditions, but what she said that I think resonated was really about being recognized as a citizen, being seen as a somebody, that it was a struggle about human dignity,” Donaldson said.

In addition to the photographs and documents put together in a display focusing on the Charleston strike in the Justice for All exhibit, footage of the Charleston hospital workers' strike can be found in the Moving Image Research Collection.

Nora Abouissa, a second-year experimental psychology student, said she came to hear Brown mainly because of her love for studying history and the people who influence it. Abouissa said she felt inspired by Brown’s message.

“That was really important for me to hear because even now as a woman, it is harder for women to get jobs and to get paid the same as men,” Abouissa said. “So, I think that really struck something inside me to just work harder and fight for the things that I deserve”.

Brown continues advocating for civil rights and social justice today through movements like the Poor People's Campaign and supporting efforts to solve what she believes to be the worsening condition of the Medical College Hospital in Charleston.

Through it all, Brown said she stays active in her fight against social injustice and discrimination to maintain personhood.

“We are people. Always remember, we are somebody."