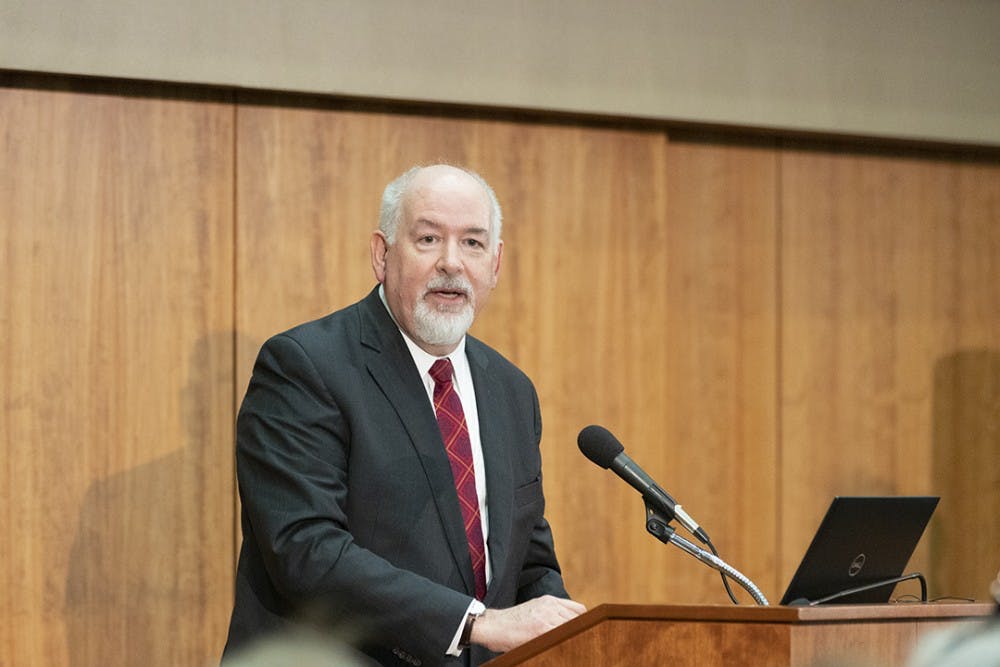 Students' and faculty's week of getting to know USC presidential candidates rounded out Thursday as Indiana lawyer John Applegate spoke with them about inclusion, student life and the university's future.

Applegate currently serves as the vice president of student affairs at Indiana University. He's worked at both Vanderbilt University and University of Cincinnati Schools of Law and for the U.S. Court of Appeals.

"What makes the kinds of jobs that I've had and which I am seeking here worthwhile," Applegate said, "is the ability to make a difference in people's lives."

Diving into the topic of inclusion, Applegate talked about an obligation universities have to work to support students, namely those who acquire student debt. The percentage of students — generally, not at USC — who start but do not complete their four years of school, Applegate said, is "amazingly high."

About 71% of students who started at a four-year university in 2016 returned to the same institution in fall 2017, according to the National Student Clearinghouse Research Center.

“Students don’t come to universities not to complete," Applegate said.

Applegate said his vision is an academic community of people who respect and learn from each other. This can't exist, he said, if any part of the community feels excluded or marginalized. He also said that while he can never understand what students of color go through in their daily lives, he's learning and willing to try.

One thing a leader of an organization can do is be clear about values and commitments and lead by example, Applegate said.

Student life was another theme during Applegate's time with students Thursday afternoon. His work experience in that area was focused on public safety — IU campus police would report to him, he said, so he thinks often about safety.

He nodded to a recent tragedy that shook USC's campus and led to emphasis on safety measures. He said he thinks the whole nation mourned with South Carolina after the murder of Samantha Josephson.

"And I will tell you one of the more challenging things that I've found in this role," Applegate said, "is the difference between education and blaming the victim."

USC needs to be certain that students have the tools they need to feel and be safe, he said, he pushed the concept of bystander intervention. Empowering people to reach out to those who can help them is also important.

Faculty also had the chance to talk about university issues with Applegate on Thursday. He said that as the president of a university, one's job is to excite and support the work that's done in classrooms, labs studios and other spaces for research and learning.

Bethany Bell, associate professor in the College of Social Work and chair of the faculty welfare committee, asked Applegate for his thoughts on what role USC should play in helping to systemically improve K-12 education in South Carolina. The U.S. News and World Report ranks the Palmetto state No. 42 for education.

"You can't serve the citizens of our state if large portions of them are woefully unprepared to even enter the university," Bell said.

Bell also said Applegate was articulate in expressing his passion for public institutions and that his background in academic affairs can be a smooth pathway to a presidency.

Lois Duke Whitaker, a political science professor emeritus, asked the candidate about the university's role in the state. She asked why he would want to come to a state with both second highest tuition rates for public universities and the eighth steepest student debt.

Applegate told Whitaker he regrets to say South Carolina is "in very good company" with such issues, and that he believes the university should be partners with the state in looking for shared solutions. Indiana decreased student debt by 19% in recent years, he said.

With Applegate and his competition touching on the importance of diversity and inclusion, faculty — and students — have also voiced concern about the finalists for university president being all-male.

Ted Wachter, a retired principal of Columbia's Rosewood Elementary School, said the finalist pool is a testimony to how the search was rigged against women. This is not Applegate's fault, Wachter said to the candidate, but he asked how USC could proceed.

Applegate said that he and other candidates are mostly kept in the dark about how the search process works, but he feels honored to have made it this far.

Despite his feelings on the results of the search, Wachter prefaced his question by saying he believes Applegate is the most qualified finalist to serve as USC's president.

Bell said in an email that she started at USC in 2008, the same year as President Harris Pastides, who she said will leave behind large shoes to fill. Her hope, she said, is that the next president can pick up where Pastides' values and expectations leave.

"There is never going to be another Pastides. It's just not going to happen," Bell said.

In each open forum, whether it was with students, faculty or other members of the community, Applegate continued stressing the idea of making a difference in people’s lives, namely students' lives.

“We have a duty to do it," he said. "That’s part of being a state university.”