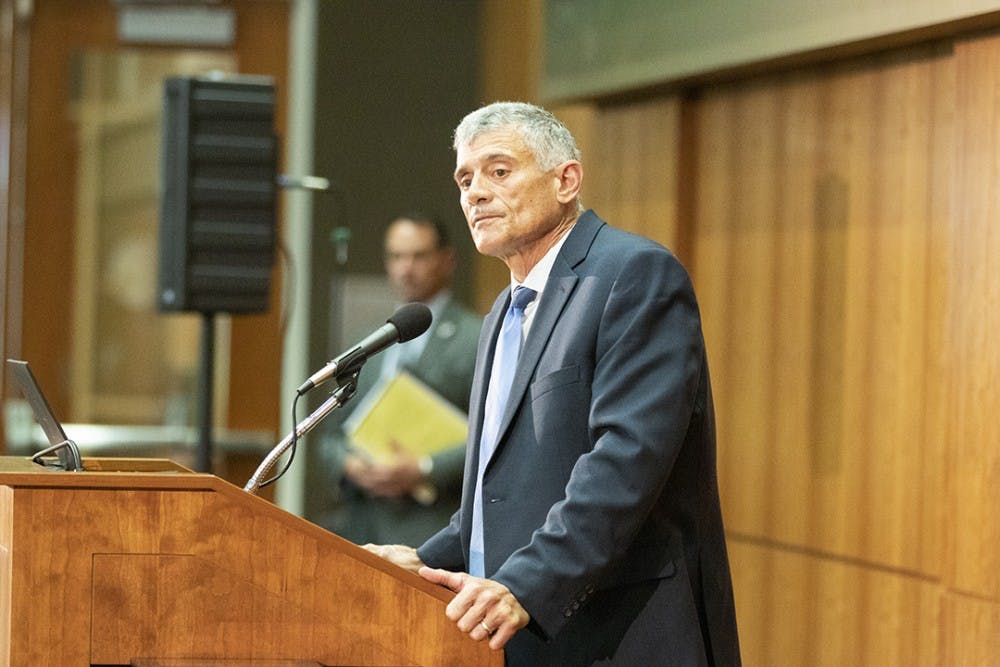 USC presidential candidate Robert L. “Bob” Caslen spoke to crowds of students, faculty, staff and Columbia residents about the importance of good character and how it extends to sexual assault prevention and his efforts to increase minority and female representation.

Caslen currently serves as senior counsel to the president at the University of Central Florida (UCF) and interim chief financial officer. Before UCF, he was in the military for 43 years and served as superintendent of the U.S. Military Academy at West Point.

At West Point, Caslen said he worked to create an environment where everyone was striving for excellence in his or her character, academics and physical health.

“So living a life of excellence means that I’m gonna perform with excellence in everything I do. Not when I want to but all the time,” Caslen said.

Caslen said if the university wants to create leaders, it needs to make sure students have good character, and he said he did that at West Point.

“If you fail in character, you fail in leadership, and building up leaders of character became the most important thing that we did,” Caslen said.

If president, Caslen said he wants his first priority to be listening to what students, faculty and staff are saying as well as getting to know people.

“My intent here is to know as many students as I can, to engage with them in as many opportunities that are out there and to make sure my calendar is free often enough to visit them in their classrooms, to visit their laboratories, to visit them on the athletic fields, to attend their home and away games,” Caslen said.

During the Q&A portion of the student forum, two students raised concerns about PEDU 101, a self-defense for women class, being cut. One student who teaches the class said it was an important part of recovering after she became a victim of violence. She asked whether Caslen believes this class is important and how he would support survivors.

Caslen offered support and talked about how he worked to end sexual violence at West Point.

“The importance of the strategy to eliminate sexual violence includes advocacy, and we as an institution have got to provide the advocacy to support all survivors as they go through what they did,” Caslen said.

Caslen believes a main component of sexual assault is a culture of binge drinking.

"We want to take out some of the contributing measures towards sexual assault, particularly the alcohol," Caslen said. "We spent a lot of time a lot of energy training and educating our students on the impact, consequences of alcohol, binge drinking and things like that."

While serving in the military, Caslen authored the “National Military Strategic Plan for the War on Terror” and spent time in Afghanistan and Iraq following 9/11.

Eva Isabel Tirado Barrett, a fourth-year German student, said she believed Caslen's background could make Muslim students uncomfortable and allow other students to be intolerant of other religions.

“I thought that his personal policies did not combine with the public policies of the University of South Carolina, and I thought that his experience in the military will not bode over well with him when he is in the ... executive office of the University of South Carolina, primarily because his public influence will generate a lot of tension between the students and the faculty,” Barrett said.

Caslen said his role in the War on Terror did not mean he was against those of a different religion, but that he worked to end a war caused by people who broke international laws.

“My study in building the strategy really gave me a very strong respect for Islam and respect for the faith,” Caslen said. “It also gave me a strong understanding of what our behavior does in Western society which is offensive to Islam and to understand that sort of value.”

Ethnic and gender diversity is a big discussion among all USC presidential finalists. Caslen hired the first female provost at West Point and has hired other women to senior positions. In terms of promoting diversity and inclusion on campus, Caslen said he received three awards from West Point, one of which was for addressing LGBTQ+ issues.

Taryn Moyer, third-year criminal justice and criminology and sociology student, did not feel that Caslen appropriately addressed questions about diversity and inclusion because he did not have any concrete examples of what he had done in the past.

“I did want to hear his ideas for making marginalized communities more supported here because I know that’s an issue that a lot of communities struggle with,” Moyer said. “There’s a lot of people who don’t feel welcome when they come on campus; the climate isn’t the greatest.”

Victoria Vinson, a first-year nursing student, watched the work Caslen accomplished at West Point while her older brother and sister were students there. From what she has seen, Vinson said she believes Caslen would be an effective university president.

“I did think that it was very impressive having seen him as a superintendent up at West Point,” Vinson said. “I’ve been able to see that he does amazing things, not just with the academy but with the students as well.”