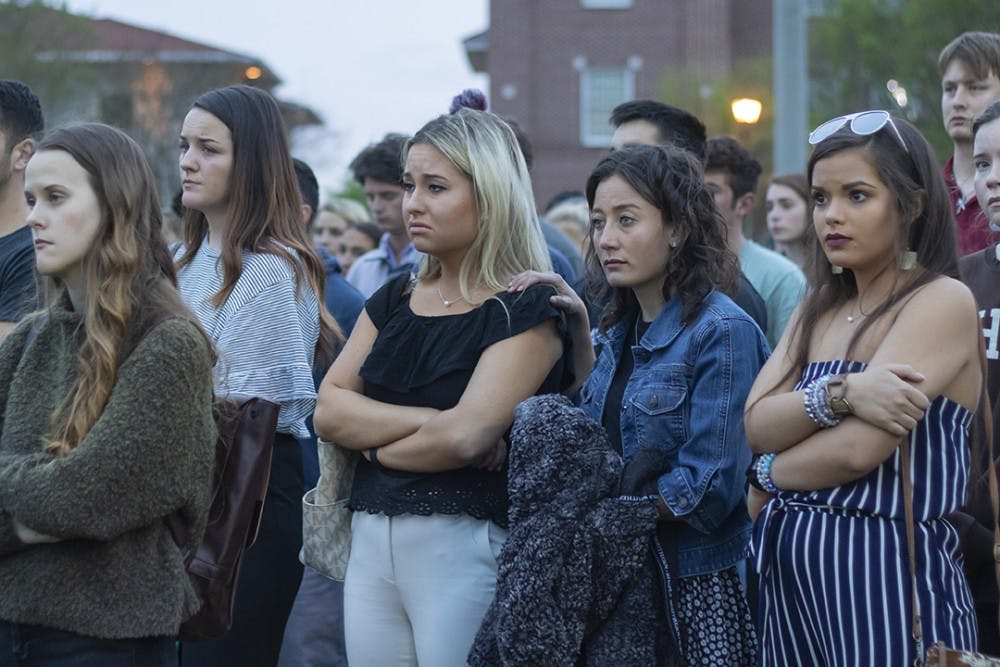 A crowd gathered at Strom Fields Sunday evening for a vigil in honor of Samantha "Sami" Josephson, a USC student who was abducted from Five Points early Friday morning after getting into a car she thought was her Uber. Among the speakers at the vigil were Greg Corbishley, her boyfriend, and Seymour Josephson, her father.

Josephson began by asking how many people in the crowd personally knew Samantha, and when the majority of the crowd did not raise their hands, he commented on the solidarity of the Carolina community.

“The reason I ask that is that there are so many people here that did not know her and this community that has pulled together,” Josephson said. “It’s totally amazing — the Gamecocks, USC, you people — how you guys have come together, how you’ve pulled this together, the support that you guys have.”

Josephson also spoke of “Sami-isms,” instances that sparked laughter and joy in those around her.

“It becomes almost weekly. Daily, sometimes,” Josephson said, “she gets on these little rolls.”

Josephson spoke to USC students directly, urging them to stay together when traveling and drinking.

“Samantha was by herself," Josephson said. "She had absolutely no chance. None.”

Josephson also mentioned his mission to urge Uber and other ride-sharing companies to improve safety measures.

“That is gonna be part of my mission in life now, is going around talking, educating, getting that out — and hopefully put pressure on Uber and Lyft to change something,” Josephson said.

Samantha's boyfriend, Greg Corbishley, shared that Samantha had left a positive impact on his life.

“In the process of the last four years that I've known her, I’ve truly learned stuff about myself that I think I'll be thankful for her for the rest of my life,” Corbishley said.

'Our hearts are broken. They're broken.'

Samantha called an Uber to pick her up from Five Points around 2 a.m. Friday. She was seen getting into a car by a bouncer who knew her, and security footage from outside of Bird Dog, a bar in Five Points, confirmed that Josephson had gotten into a black Chevy Impala.

Samantha’s roommates began to worry when they had not heard from her and called the police around 1:30 p.m. Friday. Her location was last tracked by phone on Ott Road off Rosewood Drive, about 3 miles east from her residence at the Hub.

Samantha’s body was found in New Zion, a small town in Clarendon County, about 70 miles southeast from Columbia. Holbrook said the particular location the body was found was described to him by Clarendon police as an area that would be difficult to find unless someone knew how to get there.

At 3 a.m. Saturday, the morning after Samantha had gone missing, a K-9 officer was on patrol and noticed a black Chevy Impala two blocks from the Five Points area.The officer initiated a traffic stop and asked the driver to step out of the car. A short foot chase ensued between the driver and the officer, and the driver was taken into custody.

Throughout Saturday, the suspect’s vehicle was processed. Holbrook said there was a large amount of dark liquid in the car that was later confirmed to be blood. The SLED forensic crime scene agents submitted the blood to the SLED DNA lab for analysis, and the blood was confirmed to be Samantha’s.

Other findings in the car included Samantha’s cellphone, bleach, germicidal wipes and window cleaner. Further investigation found that there was a child safety seat in the back of the vehicle and child safety locks on the back doors that would prevent the victim from escaping.

“Our hearts are broken. They’re broken. There is nothing tougher than to stand before a family and explain how a loved one was murdered,” Holbrook said at the press conference.

Warrants released by SLED Sunday morning did not release how she died but did say that she had “numerous wounds evident on multiple parts of her body to include her head, neck, face, upper body, leg and foot.”

Saturday afternoon, SLED announced they would be charging Nathaniel Rowland, 24, with the kidnapping and murder of Samantha Josephson. Rowland waived his right to appear in court on Sunday, but Samantha’s mother, Marci Josephson, spoke.

Originally from New Jersey, Samantha was set to graduate from USC in May and attend law school at Drexel University in Philadelphia.

President Pastides released a statement concerning student safety and a call to action directed toward university safety officials and establishments in Five Points. On Saturday, the Office of the President sent an email to remind students of the counseling center’s drop-in hours from 2 p.m. to 8 p.m. on Sunday and 8 a.m. to 6 p.m. during weekdays.

The email also included safety precautions for utilizing ride-sharing services and transportation to and from the Five Points area.

"Leaving Five Points, make use of the USC shuttles to make sure you get home safely," the email read.

Samantha’s death comes after a death by suicide on USC’s campus last Monday, the death of a USC Salkehatchie student, Parker Neff, after he collapsed on a baseball field Friday and the death of Evan Gaines, a USC Upstate student who was shot to death at an apartment complex in Spartanburg.

Samantha's funeral will be held on April 3 in East Princeton, New Jersey.